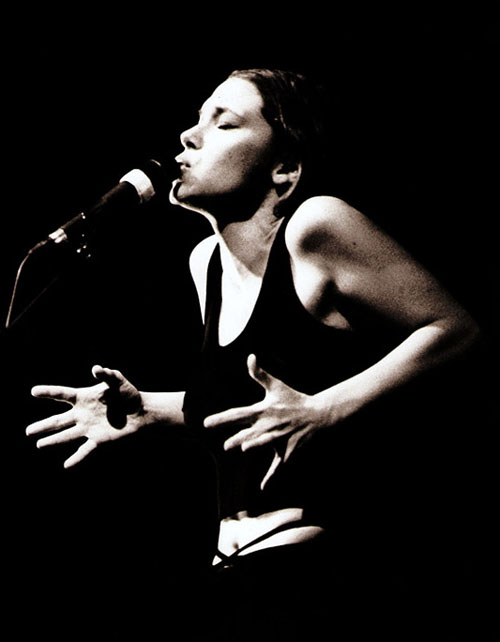 Five years after her death, Montreal’s adopted daughter — the enigmatic singer-songwriter Lhasa de Sela — has come to define the sound of the city, alongside Leonard Cohen and Arcade Fire.

I fell in love with Lhasa de Sela in a Montreal community centre hall, converted to resemble a New York nightclub in 1940, with large round tables arranged like planets around a life-giving sun. I was struck by Lhasa’s beguiling voice, angular beauty, charismatic modesty, and the hush and rumble of drums, harp, guitars, trumpet, accordion, violin, bells and percussive water-in-a-bottle that dreamed her otherworldly songs into thisworldly existence.

There are singers whose voices and musical personalities bear a little too much of the strange and uncanny for them ever to touch more than the hem of the mainstream sundress. These singers include Beth Gibbons (Portishead), Elizabeth Fraser (Cocteau Twins), Hope Sandoval (Mazzy Star, the Warm Inventions), and Lhasa de Sela. Like the Sirens of Greek myth and literature, whose oracular Song has so fascinated and disturbed the centuries, these icons of alternative music appeal as much to the mind and spirit as to the flesh.

Lhasa de Sela was born in the tiny village of Big Indian, New York, in 1972. Her father was a Mexican intellectual who obtained his doctorate in the literature of the Spanish conquest. Her mother was an American artist who plucked her daughter’s first name, which means “place of the gods,” out of a book on Tibet. Lhasa, her parents, and her siblings spent 10 years living in a converted school bus, crisscrossing the United States and Mexico. There was no television: just books, drawing, conversation, and family entertainments that included nightly singing.

At age 13 when her parents separated, Lhasa, her mother and her sisters settled in San Francisco. She took voice lessons and started singing in a Greek café. A documentary on the life of Billie Holiday inflamed her with the ambition to become a professional singer. She absorbed the power and vulnerability, starkness and tenderness of Lady Day and Chavela Vargas, Maria Callas and Cuco Sanchez.

In 1991, at age 19, she followed her three sisters to Montreal, where they were students at l’École nationale de cirque. She immersed herself in the city’s francophone culture. She wrote lyrics and melodies. She drew and painted comforting or disquieting fantasies inspired by John Tenniel’s Alice in Wonderland illustrations and the surrealist collages of Max Ernst. Over five years, she perfected her vocal craft in Montreal bars with names like les Bobards, l’Barouf and le Quai des Brumes.

In 1997 Lhasa’s first album, La Llorona, appears. Her father had taught her about “La Llorona,” the crying woman of Mexican legend and folk tale. In one version of the story, the woman wept for her children, killed by the conquistadors. She demanded revenge, but remained forever trapped between the living world and the spirit world. In her recording debut, Lhasa herself seemed like a messenger between worlds.

Exhausted by touring with Sarah McLachlan’s itinerant music festival Lilith Fair, in 1999 Lhasa moved to France, and joined her three sisters in their travelling circus/theatre company Pocheros (“Skinfleshbone”). She sang most nights, accompanied by an accordion-wielding trapeze artist. Each morning, her little niece would knock on her caravan door to wake her up, climb on to her lap and say, “I love you.”

Lhasa collaborated with French pop singer Arthur H, and contributed to a duet on an album by British indie rock band Tindersticks. Living in Marseilles, she began writing songs again. She returned to Montreal to produce her second album, released in 2003, almost seven years after her debut recording.

An album about the journey we all must take, The Living Road speaks of love, sex, creativity, apocalypse and hope in tones that sometimes border on the orchestral. With controlled abandon and knowing ardor, Lhasa and her band create lush, intricate dioramas of art song, torch, twang, blues, gospel, and lullaby. They mix in novel colours: ethereal electronica, spectral bells, clacking and skittering oriental drums, a prayerful Middle Eastern trumpet. Lyrics, in French, English, and Spanish, at times emerge with feral amorousness: “My heart is breaking / I cannot sleep / I love a man / Who’s afraid of me / He believes if he doesn’t / Stand guard with a knife / I’ll make him my slave / For the rest of his life.”

A 17-country, two-year tour follows. On stage in Istanbul, or in a Parisian television studio, her right hand grips the microphone, her left hand presses against her left temple, and her body — tense with emotion — rises and falls with the music, her voice like gritted honey. Her songs feature in The Sopranos, and in Madonna’s AIDS documentary I Am Because We Are. In 2005, BBC Radio 3 names Lhasa the best world music artist of the Americas. At the 2007 Ion International Film Festival, her video for “Con todo palabra” (“With Every Word”) from The Living Road is named Music Video of the Year. In 2009, The Times of London chooses The Living Road as one of the 10 best world music albums of the decade.

In April 2009, six years after The Living Road, a third and final album appears. Arranged and produced by Lhasa herself, and sung entirely in English, Lhasa includes Mexican and English folk, flamenco, blues, gospel, country and tango. The music is spare, unadorned, at times austere: a solo plucked harp, a few simple piano variations, a companion-less guitar, a wandering bass and trashcan drums now shadow the reflective passion of the voice and lyrics. The voice, burnished by experience, eschews the edgier flourishes of her first two albums; but it remains as expressive in its tone and phrasing as Billie Holiday’s or any of alternative music’s fallen angels. In “I’m Going In,” Lhasa sings: “When my lifetime had just ended / And my death had just begun / I told you I’d never leave you / But I knew this day would come … / Don’t ask me to reconsider / I am ready to go now.”

When someone you love dies prematurely, you feel a grief like no other. I hold Lhasa’s three albums, like a breviary, close to my broken heart.

The last time I saw Lhasa was at the Montreal Jazz Festival in June 2009. It was her final public performance. She sang a duet on a free outdoor stage, before tens of thousands, with her friend and collaborator, Montreal singer-songwriter Patrick Watson. At the end of her performance she shed a few tears. Her once long, beautiful auburn hair was closely cropped. I turned to a friend and our eyes spoke of the significance of this change in her look.

In Montreal, just before midnight, Jan. 1, 2010, at age 37, Lhasa de Sela died of breast cancer. It snowed for four days. Her ashes are buried in the Notre-Dame-des-Neiges cemetery. The handwriting-like inscription on her tombstone reads: Tu as fait grandir le coeur de ce monde (“You ennobled and made greater the heart of this world.”) ■

Robert Kilborn is a Montreal writer. Contact him at rkilborn@sympatico.ca