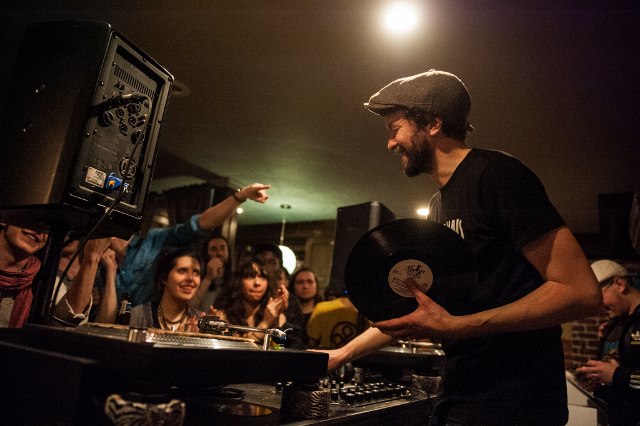 Among the many nightlife options at the city-wide Nuit Blanche extravaganza happening this weekend is a music marathon that’s become a Montreal tradition and international treat: 24 Hours of Vinyl.

The event was devised by Alexis Charpentier (aka DJ Lexis), the same connoisseur of beats, rhythms and melodies behind sonic-discovery website Music Is My Sanctuary. After a few trial runs of the 24-hour DJ set in his home studio, Charpentier and his MIMS partner Philippe Sawicki brought the event to Nuit Blanche in 2012 and have been staging the marathons with rotating DJs in different cities three or four times a year ever since.

“I feel like it’s the greatest idea I’ve had since I started Music Is My Sanctuary,” Charpentier says. “It’s like running a marathon — me and my partner pretty much don’t sleep for 24 hours. We host the event, we run the 24-hour stream, we organize the order of the DJs and make sure everyone shows up at the right time. We might sneak in a nap.”

The event has travelled to cities such as Vancouver, Toronto and San Francisco (watch a short documentary about the latter, most recent edition here), but despite demand, the cost and the logistical heft of the project have made international editions prohibitive.

“I’ve had to turn down at least 10 offers to do this in (places like) Berlin and Tel Aviv. If I didn’t have a job and I had a sponsor that would give me $20K per event, for sure I could do 12 of them every year. It’s just a shame that it’s so difficult to put together, though that’s part of what makes the event beautiful.”

The 12th edition of 24 Hours of Vinyl, featuring 18 local DJs and guests from NYC (Tim Sweeney) and France (Dr. Miette), will take place at le Bleury Bar à Vinyle, an appropriate location for an event that celebrates a music format that has survived thanks to collectors and crate diggers. And the bar is bending the city’s rules for the occasion.

“Le Bleury got an exemption to close at 6 a.m., and we’re re-opening at 8 a.m.,” Charpentier says. “The first 10 hours is a fairly standard club night where we just happen to be playing vinyl, which is not that exceptional. Personally my favourite part of the event is the morning and the afternoon — the home stretch, having breakfast and listening to jazz and listening to soul.”

Fairmount Bagels and Leméac will be providing the breakfast on Sunday morning, and in the afternoon, “just when we’re really really tired and need a kick in the ass,” Charpentier explains, DJ Ghostbeard will be playing a classic ’70s punk set, a first for 24 Hours of Vinyl.

“It’s going to be hilarious. I always put together the DJ line-up, and generally it’s an extension of what MIMS is. I don’t pretend that I like and support and play everything. There are some things that are just not my specialty — it’s not that I don’t like indie rock and classic rock and metal but it’s just a little bit less my thing. It’s typically electronic and house and techno at night, jazz and soul and hip hop in the afternoon and then four more hours of dancefloor stuff to close. But the goal is to be as eclectic as possible.” ■