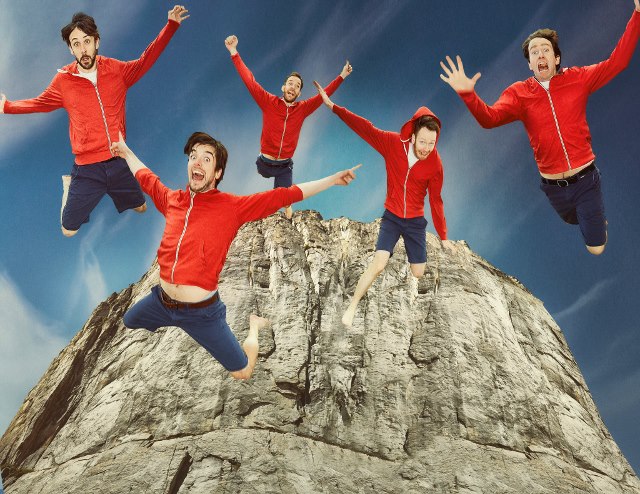 The Wildside Festival of indie theatre and dance continues at the Centaur through Saturday, Jan. 17. Here are reviews of five Wildside shows, all but one of them being performed this week:

Presented by: Uncalled For

It’s been 20 years since the High Five Lively Fivesome has assembled. The old friends, now men, gather at their childhood haunt, ostensibly to reconnect. But can they slip away from ever-ringing cellphones, ever-present worry and other confines of adulthood?

Montreal’s sketch comedy troupe Uncalled For has always tended towards the absurd and the silly, with an adult edge. When our heroes trade their phones for red hoodies, and wander into the Out of Boundaries area of their childhood, they inhabit a world of play. Jump rope, invisible handguns, musical chairs and staring contests form the bones for jokes that riff on corporations, greed, adultery, aging and love.

This is the troupe’s first new sketch show since 2010’s Hypnogogic Logic. Performers/writers Mike Hughes, Dan Jeannotte, Matt Goldberg, Colin Munch, Anders Yates and writer, stage manager and designer Jacynthe Lalonde have created a show with a premise that mirrors real life. Much like their Playday alter egoes, they’ve scattered, pursuing acting, clowning, teaching and storytelling around the world. They’ve also grown up, gotten married, reproduced. But unlike the Fivesome, they’ve flexibly stayed in touch — allowing a Montreal troupe to stretch its reach to Toronto, where some members now reside.

Working over long distance seems to work, because Playday is a tight, mature comedy show backed up by solid ideas and playful ambition. Longtime fans and newbies will delight in the troupe’s signature rapid-fire dialogue and manic but focused energy.

Playday ignores the pleas that today’s adults are big kids who don’t know how to grow up; it’s a generational call to embrace fun and immaturity as a form of release. It’s going to be the hit of the fest. (Sarah Deshaies)

Playday Mayday will be performed Wednesday Jan. 14 at 9 p.m.

Presented by: For Body and Light

Dance is a rare occurrence at the Wildside, but Coming and Going merits its place in the line-up. Choreographer Stéphanie Morin-Robert met musician and poet Ian Ferrier at Body Slam’s performance improv scene, and their decision to collaborate brought them to a residency in summer 2013 in Parrsboro, Nova Scotia, on the coast of the Bay of Fundy. Inspired the world’s highest tides, they have developed a moving, ethereal spoken word-dance mash-up that is a meditative take on life above and below the waterline.

Ferrier composed the soundtrack: both the slow-moving, looped guitar and the poetry that explores leaving home for life on a ship (and with a voice like his, Ferrier could read me the contents of the program and I would be moved).

Emerging from the dark, three figures (dancers Morin-Robert, Allison Elizabeth Burns and Linnea Gwiazda) flock to a single light suspended from the ceiling — anchor, sun, moon. The nymphs morph into the fluid denizens of the sea, flitting to and from the light with acrobatic ease. Ferrier’s poetry moves from describing the watery motions of the deep to life above sea — discussing daily life, memories, high school.

Coming and Going merges sound, words and movement into a creation that will soothe your mind. What a sublime project. To top it off, each show opened with a different poet, a nice touch. (SD)

Coming and Going’s Wildside run is finished, but the performers have a busy year ahead including more shows and cross-Canada touring, so keep an eye on cultmontreal.com for your next chance to see a For Body and Light production.

Aiden Flynn Loses His Brother So He Makes Another

Aiden Flynn won over hearts during the 2014 Canadian Fringe circuit as a wordless tribute to love, family and determination. The Tim Burton-meets-Robert Munsch Frankenstein tale was selected as the Centaur’s Best English production, guaranteeing it a slot in the Wildside’s line-up.

It’s interesting to note that the 2013 recipient was Little Orange Man, another tale that skirts the line between theatre geared to children and that made for adults. (Full disclosure: I sat on the Centaur’s 2013 jury.) Little Orange Man was the dark adventure of Kitt, a girl who delights in recounting macabre fairy tales but has to face up to difficult, adult challenges.

Aiden Flynn also presents us with a child taking on gargantuan grown-up material : a prairie boy (Morgan Murray) whose family is broken when a much waited-for sibling does not survive childbirth.

But Aiden is resourceful. With some finagling, he uses rope, knick-knacks and a corpse to stitch together a living little sibling. The show comes alive when Brother takes his first breath. Danielle Spilchen is a delight as the Frankensibling; her growling and yelps sent shivers up my spine. The Flynn siblings bond as Aiden secretly nurtures Brother through trial and error.

With a dose of shadow puppetry and a folksy set, there’s a simple charm to the show. But I worry that the smaller Centaur stage, while roomy, doesn’t give the production enough space to breathe and execute. Try, if you can, to grab a centre seat either upfront or further up for the full effect.

Aiden Flynn Loses His Brother So He Makes Another contains content that may be heavy for some kids, and it might not satisfy all adults. But it remains a family-friendly treat from Saskatoon’s independent Theatre Howl. (SD)

Presented by: Playwright Hero and the Jem

At first glance, Johnny Legdick: A Rock Opera sounds like a frat boy’s fever dream about a three-legged freak sold into the circus by his parents. A show that could easily have strayed into the offensive and immature, Johnny Legdick turned out to be darkly funny and irrepressibly exuberant. The hour-long musical is vastly entertaining and succeeds in blending dry wit, physical comedy and creativity. It also features a live band that performs some surprisingly well-crafted orchestrations.

The story of Johnny Legdick follows our three-legged hero, Johnny, in his daring bid to escape Suckadacocka Circus and find love with the beautiful Hannah. The show is underscored by a sense of playful silliness as the immensely talented and dedicated cast sings and dances their way through dick jokes, threats of abuse and melodramatic twists.

Created collaboratively and developed since its debut at Montreal Fringe last year, Johnny Legdick: A Rock Opera is a crowd pleaser and a definite must-see. (Marilla Steuter-Martin)


Fuck You! You Fucking Perv!

This multidisciplinary performance is an eerie and riveting one-woman exploration of mental illness, sanity and sexual exploitation. Performer and creator Leslie Baker is captivating as she oscillates between the manic and the grim. The soundscape that accompanies the piece is unnerving, featuring sounds of breaking glass, sirens and disembodied whispers.

Baker incorporates dance and movement effortlessly, using cabaret tropes such as tap dance and jokes to lighten the otherwise unsettling mood very effectively. The piece is visceral and flawlessly performed, as Baker doesn’t miss a beat in her delivery. The show makes use of the intimacy of the black box theatre using a very simple set and an inspired lighting design that contributes to the mystery and madness of the show.

Unnerving and thought provoking, Fuck You! You Fucking Perv! is a vivid boundary- pushing multimedia experience not to be missed. (MSM)