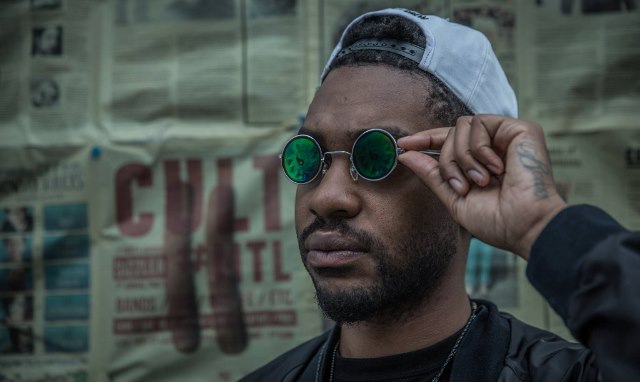 If you’ve stepped out in dancing shoes in Montreal any time over the last five years or so, you’ve stepped to the stylus stylings of gifted local beatmaker and DJ Shash’U.

Among other regular gigs, he showcases his skills weekly at Bar Grenade’s Jeudi #TBT.

This Saturday, Shash’U celebrates a new chapter in his evolving career as he launches a debut EP, Thru Da Night on revered dance/hip hop label Fool’s Gold. The collection of of funky, feel-good grooves gets listeners on the good foot for its imminent follow-up, the deeper, edgier PWRFNK EP, dropping in late March.

He took time out of a busy schedule to talk about his roots in street dance, production and sound selection this past weekend. And while it’s actually kind of weird that we’ve never done an interview until this weekend, it can safely be said that Shash’U’s moment is now.

Darcy MacDonald: How did you break into the scene at first? Did you come with beats or as a DJ? Please explain that history.

Shash’U: I came with beats first. I started producing when I was maybe about 17. Then I started doing street dancing, popping and locking. I was around 19 or 20. And a year later I got my first DJ decks. Now I’m 31, so that gives you a bit of an idea.

DM: So what were you fuckin’ with 12, 13 years ago in terms of beatmaking?

Shash’U: Pretty much software stuff. I was very much a geek at that time. I still am today. So I always had access, since I was a kid, to a computer. My dad worked (in that field) then. But I didn’t always have the funds to get an MPC or something like that, and I wasn’t even aware of that when I was young. The first software I used was FL Studio. I fucked with other little softwares, like Hammerhead. That was one of the first (production softwares) and I think it spawned something in me. That’s how I started.

DM: So you actually started off as a digital guy. Are you now comfortable with analogue gear?

Shash’U: Definitely. For the last five years I’d say everything I do is very hybrid. But I wasn’t dependent on digital before those five years either. I always sampled a lot. Today I have real synths, I do all that stuff manually. On the Thru Da Night EP, there’s no samples — everything is from scratch.

DM: Do you think the time and place you came up in gave you an advantage?

Shash’U: Definitely. I think it’s a cool thing that technology has enabled creativity.

DM: And did you start out making hip hop or other dance genres? What was going through your younger mind?

Shash’U: I listened to a lot of hip hop but I listened to a lot of different music, too. I had friends that listened to like, alternative and stuff like that. We’d do guitar jams and stuff. I started playing drums when I was nine. And I’ve always been inspired most by the music that I like to listen to. Most of that is hip hop. Producers that influenced me a lot would be like, Just Blaze, the Neptunes, Pete Rock, stuff like that. But at the same I’d be listening to songs from Busta or Slum Village without even knowing that it was J Dilla. So I guess I got into listening to (producers as artists) a couple of years later, you know? Before it was just about the artist, and the artists song and the song is dope because it’s by this guy, or this girl.

DM: We weren’t thinking about the back-end, back then. I was listening to Dilla since ’96 but I didn’t realize it until around 2002, probably.

Shash’U: Exactly. Our generation is as important as the one coming up, and the one before I guess, because I feel that we’re the bridge. Today’s kids were born with Internet embedded. We were born and grew up with the Internet’s growth. We’re like an android, or a cyborg. We have a different perspective on technology.

DM: How did you get involved in the street dance movement? And how did that bridge you toward becoming a DJ?

Shash’U: I was always into dancing, since back when I was a kid, but when I got to CEGEP, I met a guy who was down with popping and stuff like that. He was from France. He was actually the first guy to introduce me to Chromeo and sounds like that, back when that was brand-new. There was an end of the year party, and this one girl (saw us) and was like, “You guys are so cool, you should come to this dance studio.” So I went and it ended up being Urban Element. From that I was introduced to the street dance community, in Montreal and beyond. Everyone involved in that (local) history has gone through Urban Elements somehow.

So my relationship with dance has always been a part of me and a part of my music. I grew up with it and I understand the meaning of the body language of movement as another language, over the music, beside the lyrics and sounds that you are hearing. There are so many ways you can dance on a song. If you learn something new that has a social and a cultural background – like let’s say locking, and it’s social significance – you can express that on any music that you want, today. I apply that to my music. When I make tracks, they have to bump for me in a certain way. If it’s meant to be dance-y or two move people, I’m definitely gonna be getting down in my studio. If I feel good about it, it will get me dancing. ■