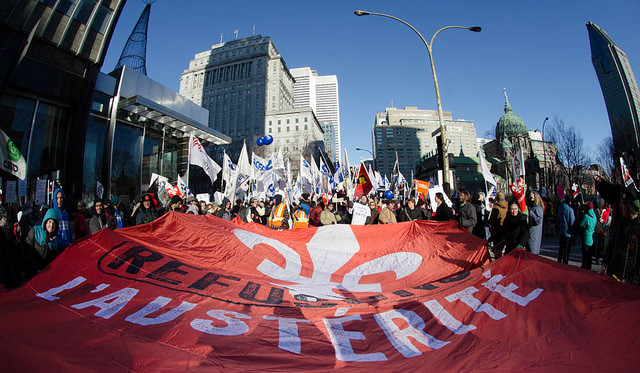 Make up your mind, M. Couillard: are we on the brink of economic collapse or are we on route to a balanced budget and tax cuts?

It’s one of the oldest scripts in the political playbook: Once elected, you discover — horror of horrors — that the previous government has been hiding just how bad the financial situation is. This requires the new government to take radical measures to cut expenses, something that Philippe Couillard’s Liberals would have mentioned during the election campaign … if only they had known.

The Liberals’ austerity plan involved finding $7-billion in budget cuts and revenue increases. To do this, Couillard and his major ministers basically declared war on the doctors, daycare users, teachers, welfare recipients, municipalities etc. As negotiations with over 550,000 public employees due to begin this year, Quebec announced it wanted to freeze salaries for the first two years of a five-year contract (with one per cent increases in the last three). This has set the stage for a massive fight with the major labour union federations. Add to that plans to cut jobs in the health and education sectors and pension reforms for everyone from firefighters to municipal accountants, and you have the recipe for social unrest on a scale unseen in decades.

Bouncing out of a caucus meeting this week, Couillard expressed confidence that his government would meet its target of a balanced budget in record time, with the last $1-billion in spending cuts identified and hinted that there may soon be room for new tax breaks.

I’m sure all those civil servants who have been told they should expect below-inflation salary increases in the next five years will be happy to hear that their largesse is already being spent. That should really improve the mood at the negotiating table this year.

Of course, the quick projected turnaround isn’t evidence of the fiscal genius of the Liberals as much as it is a reflection of factors well beyond their control, specifically the international price of oil (lower costs), the lower Canadian dollar (increased exports) and the lowering of the key interest rate by the Bank of Canada.

All of these factors may end up playing a much more critical role in boosting the Quebec economy than the Liberals bariatric — or would that be Barrettric? — surgery on the public purse. The supposed urgency of the need for drastic cuts in public spending has set the Liberals on an uncharted course that has necessarily been marked by improvisation. You need look no farther than Bill 10, health minister Gaétan Barrette’s proposed administrative reform of the regional healthcare system, to see how even the most obvious of unintended consequences have escaped the government’s attention. The draft legislation has already been modified extensively, especially in light of fears from the anglophone community that we will lose influence over the evolution of institutions that have long served the English-speaking population.

The legislation is supposed to save the province $220-million a year by slashing bureaucracy, but the minister has meanwhile begun to set in motion dozens of other reforms in Bills 20 and 28 that will inevitably add to the complexity of administering an already Byzantine system.

Meanwhile, Barrette has shown that his reputation as an able negotiator when he was the head of the province’s medical specialist federation was likely built more on bullying than diplomacy. His confrontational approach and shoot-from-the-hip verbal style has been alienating his former colleagues to the point where one prominent doctor this week announced he’s leaving the public system because of the minister’s public attitude.

Vincent Demers, a CLSC physician who works closely with the city’s itinerant population, told Le Devoir on Tuesday that he has had enough. “The contempt, devaluation, data manipulation, encouraging the public to despise us … I put my foot down. While it lasts, I’m leaving this system. I don’t expect the minister to change course. He confronts us as if he had a war to win rather than being open to proposals for solutions.”

Philippe Couillard has surrounded himself with stern, frowning, browbeating ministers to deliver the bad news, but his often beaming smile can’t hide the fact that, ultimately, he is the one who is piloting the government’s overly antagonistic agenda.

If the “urgency” for reform is diminishing, then the speed of the process should follow suit. ■