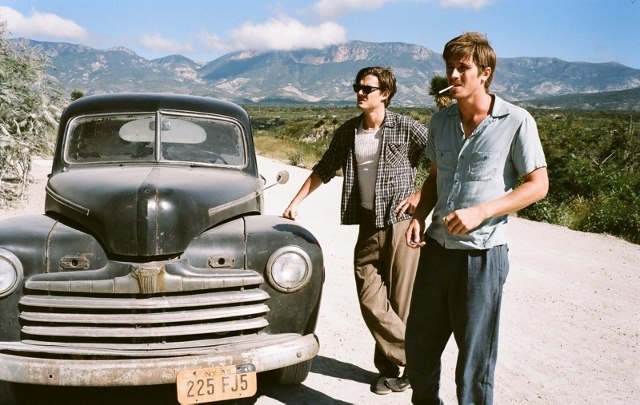 Does Montreal play itself? As the title suggests, On the Road takes places mostly on the road. Montreal seems to have stood in for the portions of the film set in New York City (and other interiors), while the road portions were seemingly shot all over the place: sometimes on the South Shore, but sometimes in the actual American South.

Most egregious local landmark: There are a few sequences shot on downtown streets that seem familiar but are difficult to pinpoint; on the other hand, an early shot has the characters walk directly in front of the Rialto and down Parc.

Notable local talent: It seems that the brunt of production took place in Montreal, which extends to casting for parts shot in other places. That’s why you’ll spot people like Dan Beirne (Dad Drives, The Bitter End) in sequences shot in Arizona. The biggest roles for locals go to Patrick Costello as Chad, the friend who introduces Sal to Moriarty, and Marie-Ginette Guay as Sal’s mother — like Kerouac, Sal Paradise is the son of French-Canadian parents.

It’s a bit mind-boggling to think that it took countless years and countless directors to develop the film version of Jack Kerouac’s On the Road when you consider that it’s been out for less than two years and already mostly forgotten. Kerouac himself wanted Brando to appear in it as soon as the book was released in 1957; versions directed by Francis Ford Coppola, Joel Schumacher and Gus van Sant failed to materialize over the years. It was finally Brazilian director Walter Salles who stepped up to the plate — while Salles has had middling success with the films that followed his breakout film Central Station, the very fact that this trailblazing novel was making it to the screen should have been a big deal.

It was not a big deal.

In Montreal, however, it was somewhat of a deal. I was working on a short film between the time On the Road was shot and the time it was released, and it seemed like everyone we auditioned had worked on it in some capacity. They kept closing streets in the Mile End for shooting, and I heard of people running into the actors around Montreal in a way that hadn’t happened since Heath Ledger was in town filming I’m Not There. On the Road had a bigger impact on Montreal while it was being made than it ever did since it came out. The reason for that is pretty clear: On the Road isn’t very good.

To be fair, the novel itself isn’t the easiest of adaptations. It’s fairly formless, and your enjoyment of it depends tremendously on how old you are and how appealing the lifestyle of being a self-obsessed, sociopathic mooch is to you. Salles seems to have understood that the task at hand is a difficult one, but it has forced him to close the film on itself and make a very pretty but mostly empty, CliffsNotes-y version of the book. Part of the appeal of the book for young proto-shitheads like myself is its rat-a-tat, adrenaline-rush pace; the reader is supposed to be just as enamoured with Dean Moriarty as Sal is, but the film’s stately, heavy-on-the-landscapes style does this no favours.

Sal Paradise (Sam Riley) is a wannabe writer and ne’er-do-well who meets Dean Moriarty (Garrett Hedlund), a hellraiser and roustabout who makes Sal’s own lack of ambition seems positively academic. Sal and Dean become fast friends alongside Dean’s young wife Marylou (Kristen Stewart), travelling the country in search of… well, who really knows? They meet a random assortment of characters, fall in and out of love, steal shit, get arrested and live a frenzied life that’s all theirs.

It’s easy to describe On the Road as a life-affirming story of discovery, as I did just above; the elements are there, after all, and it’s tempting to see the positive in characters that are pretty much manipulative jerks and assholes from A to Z. What On the Road needs is a jolt of anarchic energy like the early films of Jean-Luc Godard, not something that periodically pauses for stately shots of wheat shuffling in the breeze. There are good things to be found, certainly; the performances are uniformly pretty good (especially Viggo Mortensen as Old Bull Lee, the story’s Burroughs doppelganger, and Amy Adams as his wife) and the script does a pretty good job at paring down the events of the book, even if the pacing leaves a lot to be desired.

I don’t know if it’s possible to make a good film of On the Road; I’m certain it’s possible to make one that retains the book’s jazzy, improvised feel, but that isn’t necessarily enough to make a good film. Salles’s film falls in the ranks of so many adaptations before it: stately but ultimately soulless, good enough to get you a passing grade on your book report if you don’t feel like reading the book, but hardly a classic. ■

Read Malcolm Fraser’s review of On the Road, from 2012, here