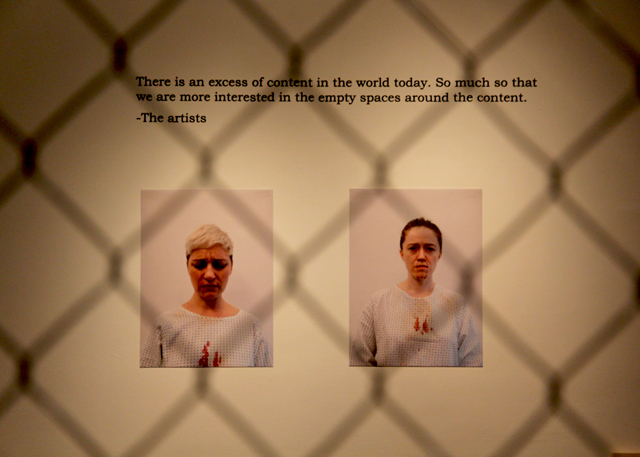 At Articule this month, the Montreal- and Cologne-based team behind Desearch Repartment is offering a tremendously satirical exhibition and series of workshops entitled Corporate Creativity Workshops for Art, in which artists can learn from corporations how to best add value, monetize and actualize their artistic practices.

Anyone who’s spent time in a corporate environment will recognize this particular kind of language that’s often employed both within organizations and outwardly. Full of buzz-words and Ted Talk style meaningless positivity about “maximizing” this and “harnessing” that. Unpredictable part-time hours are called “flex-time schedules,” Subway employs “Sandwich Artists,” Lululemon promotes its gospel of yoga with “Community Ambassadors,” and Starbucks doesn’t run coffee shops, they’re third spaces, thank you very much.

Companies no longer sell products, after all — they sell lifestyles, and what lifestyle is more desirable than that of an artist? A romantic figure, fully self-actualized and engaged at all times in sublime self-expression, facilitated by the right products of course.

Enamored with the possibilities of creative thinking, corporations have been taking cues from artists and their freestyle lives for some time now, employing the open-office concept (most famously at Google) to stimulate their employees’ creativity by removing pesky walls and letting them play as well as work together. It all sounds very progressive and groovy, until you scratch the surface and see that behind all the talk of socially progressive corporate cultures, many of these companies still make their profits the old-fashioned way; by exploitation and displacement of under-privileged communities.

Ahead of the exhibit’s vernissage tonight (Friday, Jan.16 at 7 p.m.), I caught up with the anonymous two-person team behind Desearch Repartment to hear more about the ideas behind the show. To illustrate the example of corporations using art to superficially infuse their brand identities with the shine of agreeable values despite questionable business practices, they show me a video of Adidas’s promo spot for the 2014 Brazil World Cup (an event that was almost cartoonishly evil in its record of human rights abuses), produced in collaboration with performance artist Marina Abromović with a populist, feel-good message about work relations, a rather ironic stance for a company that’s been accused of exploiting sweatshop labour.

Desearch Repartment are turning the trend of corporate appropriations of creativity in the name of neoliberalism on its head with the exhibition and its schedule of workshops where participants will “Learn to Say Yes,” “Stop Torturing Your Selfie,” and escape the boundaries of being boundary-less with “Creative Prison Solutions.”

The prison subtext runs deep throughout the exhibit, with chain-link fencing representing the incongruous dissonance of being held back by something that’s mostly open space. We may enjoy unprecedented amounts of freedom, but the cost can be felt every time we share creative content on the web for no pay and every time we self-regulate our actions out of fear that everyone’s watching.

Despite the heavy subject matter of critiquing neoliberalism, corporate appropriation of cultural capital and the increasing commercialization, depoliticization and institutionalization of art, the work is presented with a sense of humour that’s an excellent reflection of the absurdities of modern life. Guests can have their photo taken in front of a banner of corporate logos, just like their favourite celebrities. Video projections involving Starbucks-centric performance art play behind a pyramid built from “Status Quo Elements,” a periodic table of clever buzzword double-entendres. Workshop participants will learn how to maximize their Essential Happiness Quotient by engaging in YAGA, a trademarked new exercise designed to help you always gain the most by saying “yes” through patented neck exercises. This is just a hint of the variety of subversive and satirical installations that make up the exhibit.

The Desearch team shares their motivation for creating the critical works they’ve been developing over the past several years, culminating in the current exhibition: “For us this is our outlet. Otherwise the only option is to give up, because it doesn’t matter which way you turn in our world — we’re always implicated and there’s no way out. We’re all a part of the problem. We’re trying to highlight that by being even more problematic in many ways, and pushing it to its limits to shock the system. We also want to create a space to talk about these things.

“The underlying theme is the quantifying of human value and how that happens. In the workshops we will be playing with processes that quantify humans’ worth, but we’re kind of randomizing them and challenging the whole notion. In the workshops there will be the real social political dynamics that happen in groups, but we’re also inserting a kind of pointed playfulness around it that redirects the normal processes that would happen in a group.”

The role the commercial art market and art world itself has had in neutralizing the critical value of art as artists and galleries are forced to pay the bills by appealing to wealthy patrons in the face of drying-up public arts funding is a major point of concern for the artists. They tell me, “The art world is very much economically driven in the same way that neoliberalism is, and is in fact a product of it. There’s not a lot challenging the structures. Even the way art is being taught is shifting each year based on economics, such as schools cutting classes but not cutting administration at the top. In the end it’s just a business model and we don’t know what they’re selling anymore.” ■

Desearch Repartment’s Corporate Creativity Workshops for Art is on through Feb. 15 at Articule (262 Fairmount W.). A discussion with the artists will take place on Jan. 29, 7 p.m.