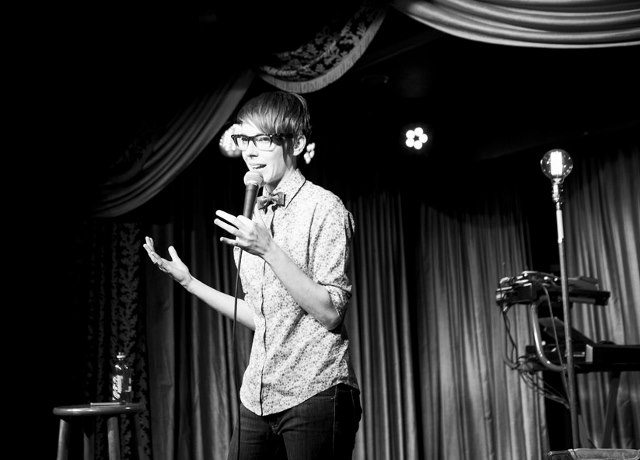 Stand-up shows can be a minefield if you don’t like rape jokes, racism and infinite variations on women-be-talkin’ comments. But nestled among the “edgy” comics and tired take-my-wifers (who are still, in 20-fucking-14, shockingly ubiquitous at comedy shows) are dozens of killer Montreal comics plugging away at their craft in the dive bars of the city. In addition to some CanCon A-listers — DeAnne Smith, Sugar Sammy, Mike Paterson, Eman, David Pryde, Heidi Foss and Jess Salomon — Montreal is home to a tightly knit scene of hilarious, insightful and virtually unknown comedians, if you know where to find them.

Since the closing of Comedyworks last June, the Comedy Nest has been the only full-time anglo club in town, so there are fewer steady gigs for aspiring Just-for-Laughers. Old favourites like Darren Henwood’s Lowdown Comedy are resting in peace. But if the indie shows springing up around the city are any indication, the Montreal scene is alive and well—and not moving to Toronto (yet). Broke? Tons of local nights are Pay What You Can (PWYC) or offer student discounts. Combine that with drink specials and you’ve got yourself a nice little night on the town for next to nothing, any day of the week. So follow me, little angels, for a Week in Montreal Comedy. I promise not to use the word “funnyman.”

There’s Something Funny Going On

Although Blue Dog’s close quarters seem to encourage hecklers and make it eye-avertingly awkward to watch someone bomb, that dive-bar intimacy also makes for some amazing back-andforth between comedians and audience. Run by the cuttingly entertaining Emma Wilkie and Rashta Kruger, Something Funny is a magical place to be when seasoned comics stop by to work out new material. Go if you like free candy and looking your laughmaker in the eye.

The Ladies and Gentlemen Comedy Show

Chris Sandiford and Daniel Carin are both great on their own, but as a comedy duo they’re unstoppable. They’re like awesome old-timey vaudeville hosts who’ve been at it for centuries. Held weekly at Shäika, a licensed NDG café (unflappable patrons will occasionally work on laptops through the entire show), Ladies and Gentlemen is hilarious, warm and super goddamn fun. This is your show if you don’t like bars, if you want a latté and sandwich with your beer, or if you just love to laugh.

Shut Up and Laugh!

Burritoville has a lock on midweek comedy. Run by Shawn Stenhouse and Scott Carter, Shut Up and Laugh Wednesdays are a PWYC favourite for the discerning burrito lover. This place gets some of the friendliest, smartest crowds in the city, so comics are less likely to pull out their most backwards material, and you’ll often catch a blend of killer bits, thoughtprovoking satire, absurd ridiculousness and talented visiting comics. This show survived the handover from founders Morgan O’Shea and Stephen Spinola for a reason: it’s hands down one of the best nights in the city.

This Montreal branch of the Yuk Yuk’s chain has gone in and out of business in various locations, but the latest iteration is tucked away in the back room of Allure Bar & Grill. Between the Tuesday night pro-am and the Thursday to Saturday features, Yuk Yuk’s delivers a solid selection of anglo sets from established comedians —keep an eye on show listings to make sure you don’t miss the good ones.

If you’re looking to catch a big-name weekend show, the Comedy Nest is your best bet. Earlier in the week, benevolent overlord Peter Radomski books Newbie Tuesdays and ProAm Wednesdays. They’re both solid shows — Wednesday in particular is often loaded with seasoned comics. But the weekend is when the Nest gets serious. Friday and Saturday, you’ll find twice-nightly sets featuring late night stars and out-of-towners, as well as local heroes on their best behaviour. Hang on to those Tuesday and Wednesday tickets — they’ll get you free entry to some weekend shows—and ask about student discounts on Thursdays and Fridays. In the post-Comedyworks world, the Nest is bravely carrying the full-time comedy banner for the rest of the city. Get in there and keep those laughs alive.

Jon Selig hosts this boisterous basement-bar show every Sunday night. Its location — yup, it’s an actual hostel — means the crowd changes constantly and is usually ready to party. Whether the stage-top couches hold orange-blazered Dutchmen, loud Spanish girls or just locals taking advantage of dangerously cheap draft ($12 pitchers!), the M is a great spot to catch some jokes before the weekly grind starts up. Plus it’s a favourite with comics, so there’s always a solid rotation of talent.