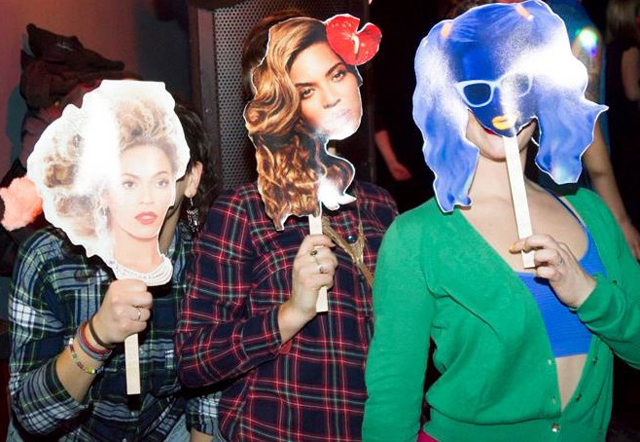 A Bow Down gone by

There’s no shortage of solid party options to choose from this New Year’s Eve, but if you want to get down with the fiercest Sashas in town, you’ll want to make your way to Bow Down 6, the biggest and most bootylicious yet in a series of Beyoncé-themed parties organized by Cerise sur le Gâteau and Dayna Danger.

The pair are pulling out all the stops for the New Year’s Eve edition, bringing in Toronto-based artist Leelee Davis for a must-see performance, plus DJ Erika P of the Rough Diamond Collective to round out the line-up of Montreal talent including DJ sets by Lykx (aka Rudy McNice) and Hua Li (see our recent interview with the DJ and performer here, with her Art Not Love collaborator Charlie Twitch). The DJs have been prepping their playlists stacked with tunes by Beyoncé and collaborators and remixers like Nicki Minaj, Azealia Banks, Jay Z, Pharrell, Timbaland, Rihanna and more.

I caught up with organizer Cerise sur le Gâteau by phone last week to get the goods on the party and the power of Beyoncé’s jams.

“The Beyoncé thing came together last year when I had been listening to Beyoncé almost constantly because she just dropped that digital album,” Gâteau explains. “I started listening more to a lot of her older stuff and finding tracks that I didn’t even know existed, and I was like, ‘Whoa, she’s really good, she’s got a really diverse collection!’ I was just listening to Beyoncé constantly, and Dayna Danger came over and said she’d been doing the same thing.

“We joked that we should have an all-Beyoncé party. It wasn’t a serious plan, but a couple of days later I texted her and said, ‘Let’s actually do this!’ That’s how it came about, and we weren’t expecting people to respond so well to it. We thought we were the only Beyoncé nerds! The first party was in February and we had such a good mix of people. There was a line-up down the block. That’s when we realized, ‘Okay, it’s not just us, everyone loves Beyoncé!’

“We were just so impressed by the response and we had so much fun that we knew we had to keep doing it.”

Gâteau stresses that one reason the Bow Down parties have become so popular is because the organizers work hard to create a space that’s positive and inclusive for everyone. “It’s really important for us as organizers to make it safe and comfortable for people of colour and especially queer people of colour to have a space to express themselves and have a good time,” she explains. “People who might not come out to other parties come to these and have a great time and meet other people, too. There’s a lot of community building and space sharing going on that I really enjoy.”

A major highlight of the extra special New Year’s Eve event will be the live performance by Toronto’s Leelee Davis, which Gâteau anticipates will be unique and intense. “If you’ve ever seen any of Davis’s performances or photos, they’re really beautiful! They are an amazing dancer with really emotional and intense performances. They’ve been preparing this performance for quite some time so I’m looking forward to it!”

Of course, part of the fun of any theme party is the participatory spirit that encourages partygoers to become performers themselves by expressing the theme through the outfits they pull together, and Yoncé rules the world when it comes to costume inspiration. When I ask Gâteau about the best thing she’s ever seen anyone wear to a Bow Down event, she laughs as she tells me about the party she and Danger hosted in Winnipeg the night before Bey and Jay Z’s On the Run tour touched down for their show in the Prairie city, when all eyes were on one of Beyoncé’s back-up dancers who’d caught wind of the event, with their beautiful body grinding up in the club in full stage costumed glory. For her part, Gâteau draws inspiration from Queen Bey’s videos and dresses as a different Beyoncé for every event, hinting at a special Yoncé-inspired collab between her and Danger for NYE.

The positive and powerful nature of Beyoncé’s lyrics as well as the sheer depth of her canon makes it easy to lay down track after track and stay engaged. “You can find a Beyoncé song for any mood,” Gâteau says. “There are great love songs, great break-up songs, great hype-up tracks for when you’re getting ready to go out. I listen to ‘Flawless’ in the morning, especially when I have something really important happening that day. It’s better than coffee for me! It helps me get ready, get hyped up and psyched for my day and feel like I can do anything.”

Keeping with that spirit of possibility, I ask Gâteau if she has any hopes for the new year ahead. “I hope that we can find some peace,” she replies. “I hope we can be able to celebrate and enjoy each other in our fullness without negating or oppressing others. I organize a lot of different types of events that have very different themes, but they all come from the same source for me. People don’t think that parties can do very much, it’s just a party; but for me I can’t separate the political from the personal. They are parties, but they are community building spaces and they are a space for celebration and sharing, and I hope to see more of that in 2015.

“It’s really nice to be able to work together with all these amazing artists and give them a platform for performing, and to be able to support the communities that support me. There’s space to talk about politics and we definitely create those spaces within diverse communities, but there’s also time to just come together and celebrate that you’re alive and that you have your health and joy and love to share.” ■