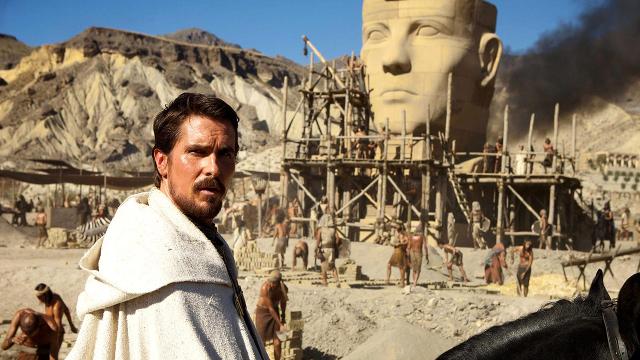 Christian Bale as Moses in Exodus: Gods and Kings

I’m not sure what made Bible epics fall out of favour; after all, Mel Gibson’s Passion of the Christ managed to be a huge box-office hit on the strength of a church-going audience and advancements in CGI have made it possible to recreate ancient times on an epic scale relatively painlessly. Yet before Darren Aronofsky’s Noah earlier this year, biblical epics were mostly relegated to international miniseries status (usually with Peter O’Toole in a supporting role, it seems), unseen by most audiences and never approaching the status of a Cecil B. DeMille epic in scope or popularity. What Noah and Ridley Scott’s new opus Exodus: Gods and Kings makes clear is that what’s reviving biblical epics isn’t a newfound appreciation for the Old Testament: it’s superheroes.

What is Moses if not the OG superhero? He has a tragic mysterious past, tremendous responsibilities he hasn’t asked for, an overwhelming sense of duty and the power to part the friggin’ sea. Scott’s film reimagines Moses as a brooding superhero who may or may not be acting upon insane hallucinations, but it’s otherwise an old-fashioned epic focused on action set-pieces and besieged by unfortunate whitewashed casting. Ridley Scott offers what’s essentially the origin story of Judaism, complete with a CGI burning bush.

Moses (Christian Bale) lives in Memphis alongside his best friend Ramses (Joel Edgerton); he’s a general in the Pharaoh’s (John Turturro, bald and in Divine eye make-up) army, but as the Pharaoh’s son, Ramses is the rightful heir. When the Pharaoh dies and Ramses takes his place, Moses learns from an elder Hebrew slave (Ben Kingsley) that he is in fact Hebrew. This news forces Ramses to banish his friend to the desert, where he wanders until he finds a farming community, gets married and becomes a shepherd (goats feature more prominently in this film than nearly any other in history — I shudder to think of its goat wrangler budget). Years have passed when Moses finds himself speaking with God himself, who has taken the form of a little boy in order to push Moses to free the Hebrew people from slavery. Moses is then forced to warn the Egyptian people that plagues will befall them unless they liberate the slaves, putting him at odds with his former best friend.

The dark, brooding elements of Exodus: Gods and Kings are at once its most interesting feature and its most squandered one. Through the eyes of the prophet Joshua (Aaron Paul, mostly wasted), the film suggests that Moses based his prophecy on a mixture of schizophrenia and fervent optimism (Joshua does not see the child on Mount Sinai; he only sees Moses talking to himself). This opens a lot of interesting doors, but they’re not fully explored in a film that ultimately remains squarely old-fashioned and concerned with a duel between the two quarreling brothers.

Apart from the grounded way in which Scott handles the plagues (by giving them plausible natural grounding in reality; the river turns red because alligators are turning people to shreds in it, for one, and the Parting of the Red Sea is depicted as basically a naturally occurring rift between two waves), Exodus: Gods and Kings stays mired in the familiar. Rousing speeches are given at top volume, travelling is done to the sounds of rousing chants and crashing orchestras; Bale might be intense and coiled, but he exists in exactly the type of broad and opulent epic he’s been cast to avoid.

Scott’s made at least two movies that operate on this general period scale (Gladiator and Kingdom of Heaven); he’s comfortable enough with the material here to give the film a proper sense of scope, but the writing (the script is by a litany of writers that includes Steven Zaillan) never quite gels properly. This is especially apparent in Edgerton’s performance, which ends up being the most entertaining part of the film precisely because it never quite finds its footing. Edgerton is the vain, petulant alternative to Bale’s soulful brooding, but he never quite settles on a portrayal, cycling through Ramses-as-pro-wrestler, Ramses-as-Colonel-Kurtz and Ramses-as-the-Great-Gazoo. It’s a bizarre mix of over- and under-playing that points to a fundamental confusion in the story that Scott wants to tell; he may be wanting to turn his film into the Dark Knight Returns version of the story of Moses, but Yul Brynner keeps poking through.

Like a lot of middling blockbusters, Exodus: Gods and Kings is ultimately made more interesting by its flaws. I’m not sure that a fully committed revisionist version of the story of Moses would necessarily be more interesting than this, even if it were more consistent. The performances are all over the place, the film is alternately silly and somber and it fizzles out by putting its most intense scene (the final plague — death of the firstborn) a full half-hour before the end of the movie. It’s a lot of things, but it isn’t stupid. It might be faint praise, but there you have it: at least it isn’t stupid. ■

Check out the trailer here.