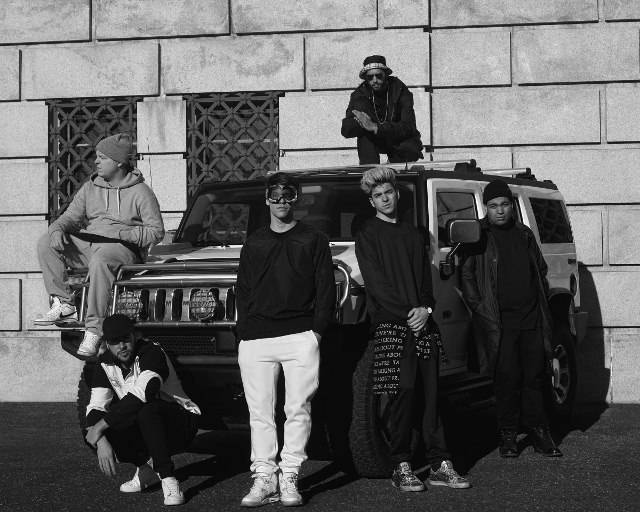 “There were so many people, and it was so dark,” continues 20Some. “And we didn’t realize it, with so many people going to smoke out the same door.”

These two Obies are chilling on a SAT stairwell pre-show in late November, talking about their label’s anniversary boat party for their undeniably classic 2013 debut Montreal $ud weeks earlier.

“The boat did this and that,” 20 imitates with a sway. “And this one girl was like, ‘Am I too drunk? Am I the only one?’ And we all just reacted like, oh, shit…

“We’re on a boat!” they laugh together.

To get allegorical, the southriverside rappers have been handling the waves they create with a concerted investment in grace. Dead Obies didn’t set out to do much else than get dope widdit. Montreal $ud, previously a wax-only issue in physical form, is by popular demand, a year later, now available on CD.

Going one step beyond, their brand-new Decoded-style pocketbook stakes final claim to every word of the DO lexicon for keeps, intertwining a making-of narrative with a definitive snapshot of what it is, whassup.

“When we mix all this stuff it becomes a big puzzle to anybody who doesn’t live in that culture. You need to be deeply in that culture to get everything we’re saying because we’re fucking geeks. And the book pushes forward the essence of what we do before the image.”

The day-to-day of being six voices within a situation of full creative control, responsibility to their label and all that comes with it, good times and bad, is no full-time yacht outing. A year of accolades, adjustments and achievements (most recently four GAMIQ awards) also saw the release of Vol.2 in their Collation mixtape series, La Limona Verde. The tides are high and the waves aren’t always even.

“Sometimes you’d be surprised how long it takes to make a decision as basic as, ‘Will we or will we not go to that photo shoot?'” Snail Kid says. “‘I don’t like the concept!’ ‘Yeah, but we can’t miss that opportunity!’ ‘Yeah but, we have to care about how we select…yeah but’. Then it’s like three days of phone calls.”

“We have this small world called Dead Obies,” RCA offers. “Our manager just said to us (we’re) hard to work with. You communicate like infants, or whatever.”

“Our slang, our worlds, our inside jokes,” adds Snail Kid, “It all comes out in our records.”

“We’re friends before being in this group together,” states RCA. “We accept that we work for the project that Dead Obies is.”

“That’s a force, too,” concludes 20, “because there’s not a single thing that we don’t have a huge argument over. And at some point, I think that’s why we haven’t taken a false step.” ■