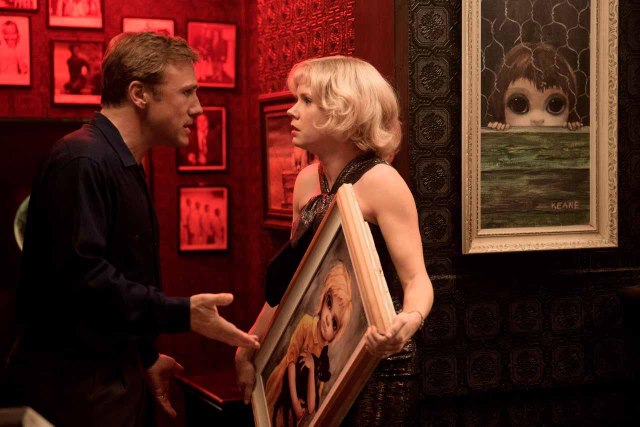 Tim Burton’s recent career has been a study in various forms of disappointment, from the pointless (Planet of the Apes) to the utterly awful (Alice in Wonderland). It’s hard to believe this is the same guy who brought us the anarchic childlike energy of Pee-Wee’s Big Adventure or the elegant melancholy of Edward Scissorhands. Some have positioned his latest, Big Eyes, as a return to form, but in my humble critical opinion, it’s just another step in Burton’s continuing decline.

Written by Ed Wood scribes and quirky-biopic specialists Scott Alexander and Larry Karaszewski, Big Eyes tells the true-life tale of Margaret and Walter Keane, purveyors of kitschy art in the late 1950s and early 1960s. Margaret (played here by Amy Adams) created portraits of big-eyed children, while Walter (Christoph Waltz) hustled the paintings to the media and the public, eventually bringing in great wealth through mass-produced poster reproductions — and, along the way, claiming credit for the artwork.

The film is an exercise in missed opportunities. The crucial issues that make the Keanes’ story interesting — what exactly motivated Margaret to paint these strange figures, why she would consent to have her credit taken away — are quickly and unconvincingly skimmed over rather than delved into in any detail. With a bland cinematic style showing none of Burton’s early originality, the film trudges through a typical biopic structure before climaxing with an interminable courtroom scene whose conclusion any sentient being could see coming for miles.

Waltz gives his all to the part of Walter, preening, clowning and turning to wounded-animal viciousness on a dime. But there’s a nagging, glaring disconnect: Walter Keane was not German. I suppose there’s no particular reason why a person with a strong German accent shouldn’t play the part of a non-German actual person, but I figure there ought to be a convincing reason to do so, which I just don’t see here.

I’m not one to ever say a disparaging word about Amy Adams, but she simply isn’t given much to work with here. After seeing her range in American Hustle and Her, it’s particularly disappointing. The bottom line is, the script is lazy and condescending towards its characters, and Burton at this point is just on autopilot. The film captures the tacky melodrama of Margaret Keane’s art while suggesting there isn’t much depth or subtext to her work’s undertones of creepy weirdness, which is a depressing metaphor for Burton’s filmmaking. ■