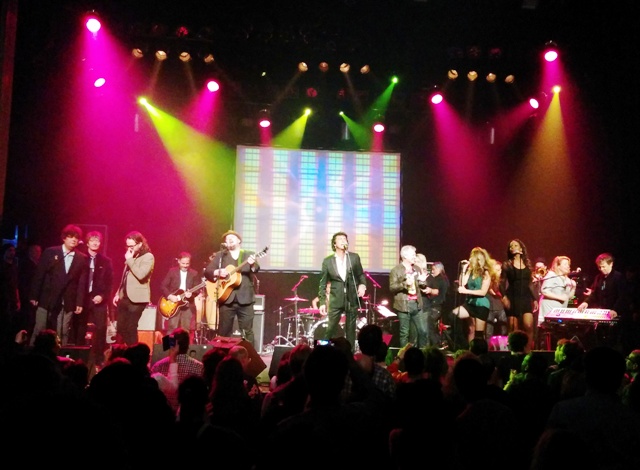 With ample lubrication, Andy Kim Christmas proved more enjoyable than it had any right being.

For the last decade, the “Sugar Sugar” and “Rock Me Gently” hitmaker has hosted a Christmas show for charity in Toronto. At Corona Theatre on Saturday, Kim finally brought some yuletide cheer to the hometown he left at 16.

The Ahuntsic alum was joined by a cavalcade of guests, from Toronto pals Kevin Drew (of Broken Social Scene) and Ron Sexsmith, to locals Patrick Watson, Amy Millan and Sam Roberts Band, while Platinum Blonde and Glass Tiger’s Alan Frew were there on behalf of the ’80s. Even radio vet Aaron Rand was there to distract us while the crew set up the next act by listing Kim’s many accomplishments.

Rand announced the show as sold-out, likely in jest. At best, the floor appeared half-full, although it’s entirely possible the boomer crowd stuffed the seated balcony.

That allowed those on the floor to bathe in Kim’s grizzled showbiz vet aura from up close. The 68-year-old is ageing in the graceful way old time celebs often do — the pinky rings, physique and hair remain unchanged, while the skin appears slightly more vulcanized. It was hard not to appreciate Kim when he was going full showbiz, like when he introduced Watson as someone who had played with James Brown one time. (Watson’s quizzical reaction was priceless.) Returning to Montreal was clearly a big deal to him, as he teared up briefly talking about his late brothers. Like a pro though, he was able to switch back into performer mode on a dime.

His voice has stayed intact as well, although after a few cups of Christmas cheer I was singing as loudly as he was. I apologize for nothing: the whole point of the show was for everyone to get blotto and shout along to his two biggest hits. That’s why he saved them for the end. That’s why “Rock Me Gently” sold eleventy billion SUVs (give or take).

After a brisk set where each guest played a handful of their own tunes, with a few Christmas songs tossed in – like Watson leading a sing-along of John Lennon’s “Happy Xmas (War Is Over)” – Kim et al. closed the night with rousing renditions of his aforementioned smashes. Scratch getting my ’60s crazes mixed up in the presence of Andy Kim by doing the Twist during “Sugar Sugar” off the bucket list.

Somehow, that may not have even been the highlight of the night, thanks to the surprise guests: ’80s CanCon glam rockers Platinum Blonde. Frontman Mark Holmes, his hair still stylish but not as extravagant as before, first hit the stage to perform “You’re a Mean One, Mr. Grinch.” Later on, he returned with the band for a three-song set of “Not in Love,” “Standing in the Dark” and “It Doesn’t Really Matter,” and they sounded infinitely better than your low bitrate MP3s that were probably ripped from an old cassette tape. Holmes said they’re coming back for a headlining show next summer. Go, if only for the reverb-y guitar.

As a working freelancer, I don’t get invited to company Christmas parties. Andy Kim Christmas was the perfect alternative: there was plenty of booze, I was surrounded by older people I had no desire to talk to, and the music was of the corny sing-along variety. ■