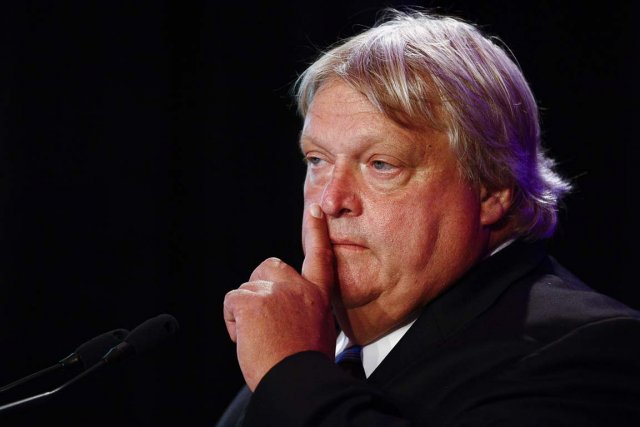 The hallmark of the Harper government in Ottawa has been its unrelenting use of “omnibus” bills to pass unpopular legislation by burying it in a vast tidal wave of measures governing everything from copyright laws to cuts in health benefits for refugees. Ranging anywhere from 400 to almost 900 pages, the bills make it difficult to mount sustained opposition to particular measures, let alone to see that substantive issues get a chance for real debate in Parliament.

Now the Couillard government seems set on adding a Quebec twist to the omnibus tactic with its tsunami attack on everything from daycare fees to pension reform under a massive push for imminent and long-term austerity.

School boards, public health programs, public daycare, community group funding — there are seemingly no sacred cows as Quebec has set itself a target of $6-billion in recurring budget cuts over the next two years.

(“Seemingly,” because education minister Yves Bolduc has already taken subsidies to private schools, of all things, off the table.)

Some of the moves are already underway in legislation such as Bill 10, which will institute the most significant reform to the healthcare system since PQ premier Lucien Bouchard’s famous “virage ambulatoire” moved waves of patients out of hospitals and into homecare in the mid-’90s.

Now, Health Minister Gaétan Barrette is proposing a second virage, only this time it’s healthcare employees who are being sent home. It’s being dressed up as a move to eliminate wasteful levels of bureaucracy — hey, who could possibly oppose that? — but it needs to be seen in its broader context. The jobs being cut will not be redistributed around the system, they will instead serve to reduce the healthcare workforce by about 10 per cent in an era where an aging population will continue to place a greater and greater strain on the still-shrinking number who remain on the front lines.

The desperation of the Couillard government to sell its half-baked hodge-podge of cuts and compressions could not have been more clearly illustrated than its attempt this week to cast a potential increase in daycare fees as a Robin Hoodesque tax on the rich, who could see their costs jump from $7.30 by as much as another $20 per day per child through a surcharge collected via income taxes, according to Le Devoir.

Make the rich pay! How Marxian, Mr. Couillard! Except the proposal would have its most significant impact on families where the combined income of both parents is less than $100,000.

More importantly, it is a significant departure from  the principal of program universality, where rich and poor alike are entitled to receive the same services at the same price. “Targeted” programs that attempt to create a differential price structure based on income invariably bring with them increased bureaucracy and surveillance. More to the point, they are nowhere near as effective as the graduated income-tax system for ensuring that the wealthier make a proportionally larger contribution to the tax base than those who are less well off.

Not that the current tax system isn’t full of holes that allow the wealthy to sidestep their fair contribution, but the solution to that resides in tax reform, not a surtax on middle-class Quebec parents.

Nevertheless, Family Minister Francine Charbonneau has pooh-poohed the idea that her government was betraying the principle of universality, blaming that instead on federal tax credits. In a study published Monday as part of an examination of the economics of non-subsidized daycares, one table calculates the after-tax cost as $1.62 per child per day for a family with a revenue of $40,000 vs. $2.87 for a $140,000 combined income.

That doesn’t prove that we no longer have program universality, Mme Charbonneau, only that we still have a graduated income-tax system.

Which is surprising, actually. Let’s hope it doesn’t disappear in the next Harper omnibus bill.