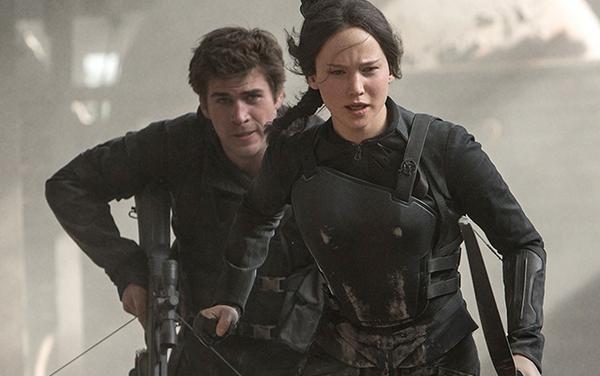 I’m as surprised as anyone that I actually enjoy the Hunger Games series; my tastes rarely match up with those of teenagers. As far as dystopian, kid-friendly riffs on Battle Royale go, though, you can hardly find better. The films are among the better / most accessible young adult adaptations out there, but they also fall victim to the recent trend of stretching things out as much as possible to placate the fanbase. It used to be that you went to see the film adaptation of a favourite book knowing full well that not everything would make it in; the mediums are different and the way storytelling is handled in film is different.

Since Peter Jackson figured out that people would come out to see their favourite books no matter how many three-hour chunks you split them into, however, drawn-out adaptations have become more standard. Those expecting carbon copies of the book are in luck; The Hunger Games: Mockingjay — Part 1 takes 140 minutes to cover roughly 20 per cent of the story in the book (the entirety of the plot of the film is contained in two paragraphs of the book’s Wikipedia summary). It’s less a satisfying narrative and more of a functional narrative funnel, furiously pushing elements at you to set you up for the inevitably more epic (and hopefully condensed) second part.

When we last left Katniss (Jennifer Lawrence) at the end of Catching Fire, she was being rescued from the crumbling game world by Plutarch Heavensbee (Philip Seymour Hoffman), President Snow’s (Donald Sutherland) right-hand man, who had now revealed himself to be a rebel attempting to crumble the Capitol from the inside. Heavensbee takes Katniss to District 13, an underground military base filled with rebels and led by President Coin (Julianne Moore). The rebels have a plan to use Katniss as a revolutionary icon to turn the other districts against Snow, who has captured Katniss’s pint-sized love interest Peeta (Josh Hutcherson), using interviews with him as scare tactics to placate the restless districts.

And that’s about the size of it. The Hunger Games: Mockingjay — Part 1 is much more of a political thriller than either of the films preceding it; Katniss is turned into an almost Che-like figure (complete with a signature murder ballad repurposed as a rebel song) who gives a lot of rousing speeches but there’s a lot less action than in the previous films. There’s still plenty of momentum to the film, since director Francis Lawrence has made the transition between the two films essentially seamless. Jennifer Lawrence is predictably great in a film that she more or less carries all by herself; the supporting cast is fantastic as well, but they spend the majority of the film essentially as exposition delivery machines (but you could do worse for exposition delivery than Hoffman, Moore, Sutherland and Woody Harrelson).

The Hunger Games: Mockingjay — Part 1 seems almost designed to be viewed as part of an epic binge-watch of the entire series. It’s nearly two-and-a-half hours of connective tissue given life, perfectly entertaining in the scope of things but completely unsatisfying as a standalone film. When it’s all said and done, it’ll fit nicely within the entire series, but by itself it’s one long-ass, unsatisfying teaser. ■

The Hunger Games: Mockingjay — Part 1 is in theatres now