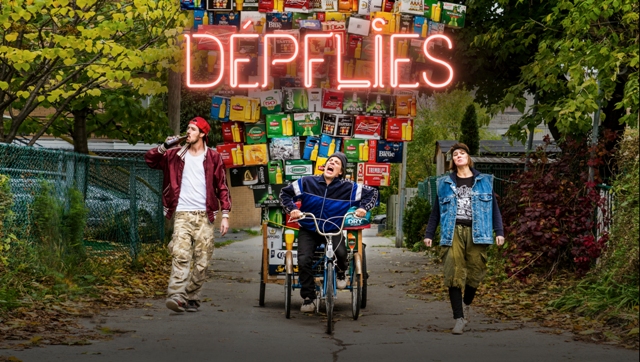 CBC’s ComedyCoup competition offers Canadian comedy creators the chance to bag a $500, 000 prize and a half-hour primetime pilot based on the quality and popularity of their work. Contestants are given a different challenge each week that always ends with the creation of a 90-second video. Comedy fans vote for their faves and the bank of contenders is whittled down every week. From an original lineup of 282 projects, only 15 remain, including two Montreal projects — dépanneur-set sitcom Dépflies, from sketch comedy troupe Le Nouveau International, and Vice documentary take-off Dope Ass World, from the online production company Boo Ya Pictures.

Mercieca first conceived of Dépflies as a stage play in 2012; it had a successful run at Théatre Sainte Catherine, where Mercieca is also the artistic director. Dépflies is a bilingual sitcom set in a St-Henri dep where the various neighbourhood eccentrics congregate. We spoke to Mercieca a few days before the finalists are further whittled down; the top 5 projects will be announced on Monday, Nov. 24.

1. What has changed since taking the stage show to the screen ? Were there any particular challenges?
In order to make the story and the comedy work on-screen, I’ve had to cut a lot of the theatrical monologues and also trim the long dialogues between characters. These have been trademarks of the plays so it makes for a bit of a different experience. But the characters and their back-stories, mannerisms and personalities are all still there.  Adapting to the screen has made for a more clinical, sometimes broader approach.  For me, the biggest advantage is that television is a more permanent medium. The product is less fleeting than the stage productions, so that’s nice.

Adapting 16 hours worth of plays has been a challenge. Dépflies is a big world. The ComedyCoup videos are 90 seconds each and that isn’t a lot of time. At the end of the day, I think we managed to keep the spirit and essence of the show. The hardcore fans are happy and the new fans get a taste of the live show in this new medium.

2. What made you decide to keep the show bilingual, knowing that you probably had a better chance of gaining fans in the rest of Canada if you kept it in English?

To do a show that is quintessentially “Montreal” that isn’t bilingual would be sacrilegious. Really, we had no choice.  We hope to build a fan base amongst Canadians who want a glimpse into a unique and interesting world or for those who have lived in Montreal, a nostalgic romp through a sweet place in their hearts. It’s really important for us to ensure that the two languages merge seamlessly for the viewer. We aim for a final product where people will barely even notice that there are subtitles.

3. What is it about the idea of ‘the dep’ that drew you to writing about it?

The universality of a dépanneur was a big draw for me — in Quebec, we call them deps but communities outside of Quebec will know them as a corner store, a bodega, a tuck shop, etc. For me there is a feeling of “anything could happen” in a dép. Really, though, it was meeting dep workers and hearing their stories. My neighbourhood dep often regaled me with stories of deliveries on horses back in the old days before the big chain grocery stores, and the family day-to-day rituals of labouring at a dep. These stories were, and still are, interesting. It’s nice to know about the unique lives of those in your community and the dep provides a symbolic meeting place for those sorts of interactions.

4. What’s a question you wish someone would ask about Dépflies that you haven’t heard yet?

5. If you were no longer in the running, who would you be rooting for?

I love the weird humour of Humantown — their most recent video is brilliant. Also it’d be cool to see a Vancouver comedy series — so I’d back them for sure! ■

The Mayor also confirmed that the Hate Crimes unit of the SPVM are investigating the incident.

Pre-sale tickets are already available for the Just for Laughs event at Olympia.