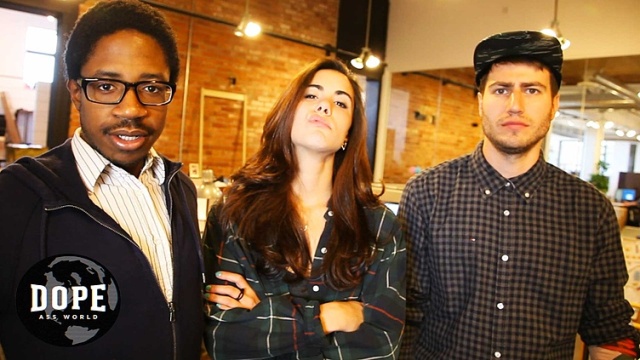 CBC’s ComedyCoup competition offers Canadian comedy creators the chance to bag a $500,000 prize and a half-hour primetime pilot based on the quality and popularity of their work. Contestants are given a different challenge each week that always ends with the creation of a 90-second video. Comedy fans vote for their faves and the bank of contenders is whittled down every week. From an original line-up of 282 projects, only 15 remain, including two Montreal projects — dépanneur-set sitcom Dépflies, from sketch comedy troupe le Nouveau International, and Dope Ass World, from the online production company Boo Ya Pictures.

Dope Ass World is a wild riff on the Vice style of in-your-face travel documentaries by the team that brought you Lazy Boyz, The Avengers Off Duty and It Ain’t Easy (Havin This Big a Dick). We spoke with the Boo Ya team (Ryan Coopersmith, Charles Muzard, Ryan Prizant and Harris Ellison) only a few days before the Top 5 finalists are revealed, on Monday, Nov. 24.

1. Boo Ya already has a good amount of web productions under their belt — did you approach this one differently knowing it was a competition?

Ryan Coopersmith: We never wanted to save ideas for future videos because we could be eliminated, so every week we were really trying to put our best stuff on screen. Knowing we only had 90 seconds per video we tried to design them to move as fast as possible, never be boring, and pack as many jokes in as we could.

2. Tell me a little bit about the logistics of having so many locations and actors for your teaser. Most of the other projects keep it to a core cast, but you take it all over the world (so to speak).

Charles Muzard: The fun thing about our project is that it needs to look like a documentary, so we never needed to have big lights, heavy equipment or many setups. That really helped us race from one location to the other in under three days.

Ryan Prizant: We’re used to turning videos around quickly on YouTube so we definitely felt confident going into this. That being said, Comedy Coup’s intimidating six-day schedule is pretty gruelling! We end up producing a lot of things on the fly — even while we’re shooting.

Harris Ellison: Over the years we’ve shot around the city a lot and built many good relationships with great locations and actors. When you’re shooting with no budget, you can’t be shy to break the rules a little bit and ask for a lot of favours!

RC: The movie gods were behind us, too. While filming our “Inter-Species Marriage” segment, we crashed an actual wedding rehearsal and convinced them to be extras… We got all our bubbies together to film the “Golden Age Rave”, and there was a senior citizens’ card game going on next door… And let’s just say they were all down to party!

CM: The fun thing about our documentary style is that we don’t necessarily need a huge crew. So it may not be SO expensive to travel and shoot on location. We’re like the Planet Earth of comedy! We’d love to go to Antarctica to investigate the mysterious truth behind global warming… Or Brazil to report on literal cock fights. It would be insanely awesome to travel all over the world making comedy.

HE: That being said, we can fake a lot of locations. We faked Africa in Boucherville, Quebec and Afghanistan on a construction site. We haven’t even exploited Chinatown yet…

RC: We could also take a limited film crew onto one of Richard Branson’s commercial spacecrafts and do a story on the moon. Call our show Dope Ass Universe.

4. What’s a question you wish someone would ask about Dope Ass World that you haven’t heard yet?

CM: “Can we pay you for your services?”

5. If you were no longer in the running, who would you be rooting for?

RC: Every team in the top 15 has a unique form of funny… And purely as comedy fans we’d love to see all the top 15 got to series in some shape or form. Graham Clark: Wilderness Man‘s absurd humour mixed with their crazy production value really tickles our funny boners!

READ ABOUT DEPFLIES, THE OTHER LOCAL COMEDYCOUP CONTENDER, ON PAGE 2