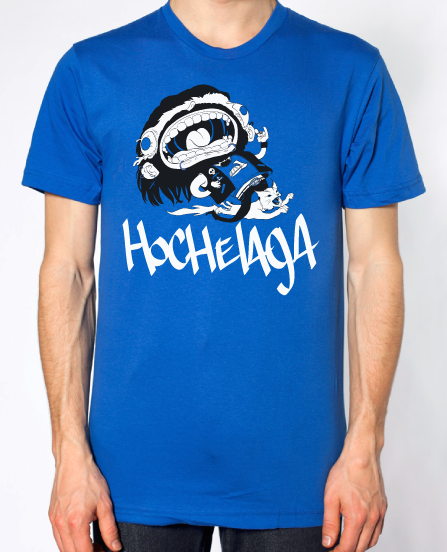 Montrealers have a thing or two to say when it comes to civic pride. The popularity of our yearly Best of MTL poll continues to prove that to us, but so has the very visible embrace of local landmarks like the Farine Five Roses sign and other iconic structures and signage worn by Montrealers on shirts and pins produced by company/boutique Montréalité. But what if you could flaunt your love for your city while also supporting local artists and charities? That’s the business model for two local companies that have come into their own this year.

One of them is Monhood, producer of T-shirts, tote bags and prints with specific neighbourhoods emblazoned on them, from NDG to Hochelaga, all designed by local artists. Proceeds from sales are donated to local charities such as WomenAWARE, SPCA and Mission Old Brewery.

Monhood founder Martin Dam-Sorensen came up with the community-building concept upon his return from a UNICEF volunteer program in 2013. “I thought, why don’t we do something around these neighbourhoods that everyone is so proud of in Montreal? One idea became another and I thought we have all this creative talent here, that’s what we’re known for. I could see the advantage in the long run if Montrealers could get together and solve things instead of this existing [rivalry],” says Dam-Sorensen, referring to Quebec’s linguistic divides. He imagines that this project could help to bring us all closer together as we build towards improving our city.

The website launched back in January and currently showcases the designs of award-nominated artist Chris Soueidan (of Loogart Design Studios, illustrator Danielle Jones and Jason Botkin, founder of En Masse creative collective. Together, they’ve commissioned artists to create their respective neighbourhood illustrations. With a total of nine neighbourhoods represented, each design has its own story.

“When I was asked by Jason Botkin to design a T-shirt for Monhood representing the West Island, I thought, ‘How convenient,'” says Melissa Del Pinto. “The West Island is my new family home town — I moved from St-Henri when I thought of pumping out kids, and it’s where it’s at to see some of Montreal’s most beautiful birds. I’d like to think they’re our vigilantes in our hood, protecting us from harm and negative energy from coming in.”

Some of the designs, such as the illustration representing NDG, also serve to educate Montrealers about the history of our city. “NDG used to be a musk melon field so I thought it would be appropriate to create a little awareness of our roots, so to speak,” explains Jason Wasserman.

Martin’s ultimate dream for his project? To show up at Tam Tams one summer Sunday and find a multicoloured sea of his T-shirts repping all of Montreal’s neighbourhoods. ■

Monhood T-shirts are available here, for $29.95

READ ABOUT HEART CITY ON PAGE 2