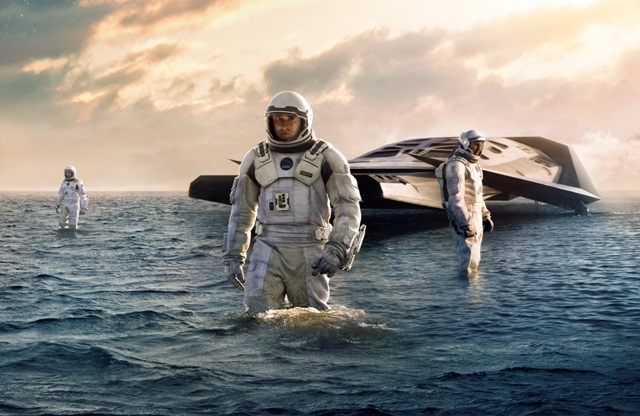 I’m beginning to think that Christopher Nolan is the Pink Floyd of directors. Think about it: they’re both British, they both started doing scrappy genre-bending work before moving on to bigger and more elaborate projects that were simultaneously extremely profitable and completely removed from the popular currents of the day, they’re both heavily into bombast and they both leave me, for the most part, completely and utterly unmoved. As Nolan moves into being cinema’s untouchable golden boy, his ideas are becoming grander and grander yet his grasp on the emotional core of his stories remains loose. Nolan’s operating in a more Spielbergian mode with Interstellar, drawing from that bottomless well of daddy issues material to anchor the film’s characters, but it remains clear that he’s way more into tesseracts and black holes and the space-time continuum than he is into families, even if the film features way more crying that his last three combined.

In the near future, the world has all but crumbled due to the rapid extinction of food sources. The military has been disassembled and most government projects have been retooled into farming ventures that are being decimated by toxic dust clouds. Coop (Matthew McConaughey) is a former pilot turned farmer whose daughter Murphy (Mackenzie Foy) has come upon a Morse code signal seemingly tapped into a dust cloud by potentially alien beings (don’t worry, it gets more ridiculous and impossible to describe). Following the Morse code coordinates leads them to a secret bunker and to Professor Brand (Michael Caine), his old NASA buddy.

Brand and his daughter Amelia (Anne Hathaway) have been secretly running a covert space program in the goal of finding another hospitable environment somewhere in the galaxy, and they’ve discovered a new wormhole (seemingly put there by, once again, mysterious beings) that may contain the secrets of mankind’s survival. A team has already been sent unsuccessfully and it’s up to Coop, Amelia and a couple of less defined dudes played by David Gyasi and Wes Bentley to go into the wormhole and fetch the data uncovered by the other teams and save the Earth, while Coop’s children age into being Jessica Chastain and Casey Affleck back on Earth.

It’s all very complicated and ambitious, bringing Malickian scope to what essentially amounts to a space exploration adventure. The complexities of Nolan’s story (co-written with his brother Jonathan, his usual writing partner) require a metric fuckton of exposition that doesn’t always convince (and is likely to enrage nerds and Neil DeGrasse Tyson, based on an uneducated guess). Nolan has a whole universe and end-of-days scenario to set up that gets in the way of character building; despite a crackerjack cast (which also includes an extended cameo by an A-list movie star), the characters and their emotions often feel like little more than cogs in Nolan’s precisely calibrated Rube Goldbergian plot construction.

Shot partially in 70mm and projected in IMAX in some instances, Interstellar is a technical marvel any way you slice it. Even if it was mostly composed of aerial sequences and the characters traipsing around on foreign worlds without the space-time continuum mumbo-jumbo, it would remain a must-see. Hans Zimmer’s score is often embarrassingly overbearing (the screening I caught frequently had the score drown out dialogue, though this may have been an issue with the theatre) but the film is frequently more moving in its silent sequences of space exploration than it is in its tearful monologues about love, family and the end of the world. It’s admirable in a sense that Nolan has finally come out of his comfort zone and attempted to connect with characters in a meaningful way, but it also feels unnatural.

In that sense, Interstellar is Nolan ostensibly reaching peak Nolan; it contains everything he does best alongside pretty pure distillations of the things he’s terrible at. It’s a testament to Nolan’s talent that him reaching peak Nolan doesn’t result in a Shyamalan-level flameout. There are times when Interstellar feels more like a feat of engineering than a feat of storytelling – it seems more easily appreciated like one would a bridge or a building, admirable in its construction but unlikely to stir up anything other than admiration. It’s an incredibly well-made film with some stirring action sequences, but I’m not sure it lives up to its ambitions. Time will tell if it lines up perfectly with Dark Side of the Moon, though. ■