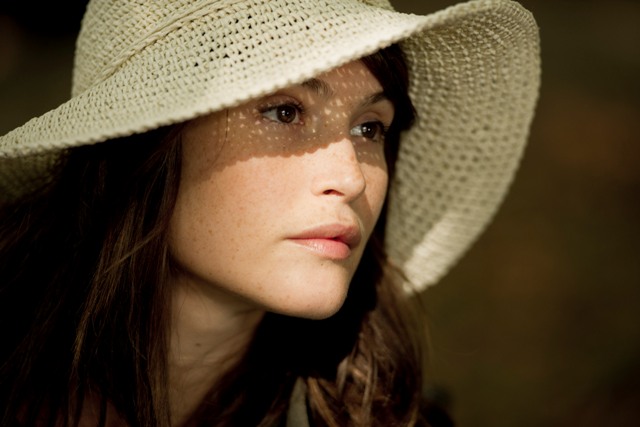 Once in a while an actor falls into a role so effortlessly, you would think it was written in the stars. The success of Anne Fontaine’s Gemma Bovery lies entirely on the shoulders of the actress playing the title role; if she doesn’t hit that perfect mix of desirability mixed with ennui, then the film is a complete misfire of men losing their goddamned minds lusting after someone who feels at best like a Manic Pixie Dream Girl caricature and at worst like a bizarre alien. The fact that Gemma Arterton has the same name as the heroine is a happy coincidence; the fact that she inhabits the character so perfectly isn’t.

Gemma might be the titular character in Gemma Bovery, but she’s not the main character; that honour goes to Martin Joubert (Fabrice Luchini), a bourgeois would-be intellectual who has returned to his hometown in rural France to run the family bakery. Joubert is a bit of a pretentious blowhard (much to the exasperation of his wife and teenage son) obsessed with classic literature, particularly Flaubert’s classic Madame Bovary. Joubert is more than a little flustered when a British couple moves in across the way and he learns that her name is Gemma Bovery (Arterton). Not only is she young and beautiful like her namesake; she’s also married to a much older man (Jason Flemyng). Joubert finds himself somewhat taken with his new neighbour, while she soon becomes bored with rural living and begins an affair with a young man in town (Niels Schneider, of Les amours imaginaires), further mirroring the life of her tragic namesake — if you’re not familiar with the original novel, it’s pretty much one of those ‘everyone dies in abject misery’ classics).

The parallels between the story and the Flaubert novel are both the best and the worst aspects of Gemma Bovery. Fontaine draws a lot of humour from Joubert’s perma-incredulousness at the way the circumstances of Gemma’s life parallel the novel, but the tragic nature of the original story also means that the film sometimes has to take some sharp turns into the dramatic that don’t really feel organic to its frothy French romp feel. It’s hard for me to say how much of this is the film’s fault and how much of it originates in Posy Simmonds’ graphic novel; I haven’t read it, but that kind of narrative lurch usually works better on the page than on screen. Gemma Bovery ultimately works better as a light comedy than it does as drama.

Either way, the film belongs to Arterton. The character of Gemma is particularly tricky because, although the film is ostensibly about her, it’s told entirely through the perspective of the men around her and the way she inadvertently wreaks havoc on their life. She’s perceived as this angelic beauty and object of lust; lean on that too heavily, and you’ve got a regressive film about dudes walking into walls as they ogle a bimbo. Arterton brings a necessary sensuality to the role (there’s a scene of her kneading bread that’s almost Ghost-level memorable) but also a fiery passion that’s undeniable. If Arterton wasn’t already an established commodity, this could realistically be her Audrey Hepburn in Roman Holiday moment.

The French do romantic comedy better (and in larger quantities) than pretty much anyone else; it’s not hard to imagine the tone-deaf boondoggle that Gemma Bovery could’ve been in less competent hands. As it stands, though, the film is pleasant enough without being particularly memorable. Like the pastries Joubert makes and Gemma tries to pronounce, it hits the spot without being much of a meal — but it’s worth it for Arterton alone. ■