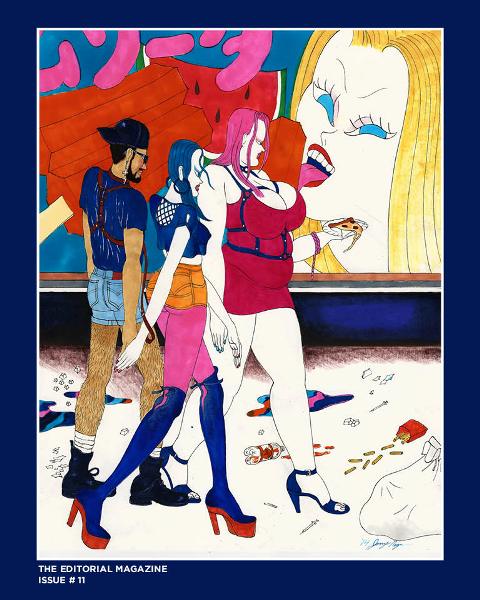 The Editorial Magazine, voted #4 Best Magazine in our Best of MTL readers poll

In September 2011, Claire Milbrath was looking for a place to publish her artwork. A recent graduate of Concordia’s history program, she worried that she didn’t have enough connections in the art world to ever do anything with her drawings, which, up until then, had been only a side project. Many of her friends were in the same position, so she decided to create her own publication, which you might recognize three years later as The Editorial Magazine, an online and print art/fashion magazine that mixes the feel of an underground zine with the exclusivity and taste of your most finely curated dreams.

Before she decided to produce her own magazine, Milbrath didn’t have any experience in publishing, and editor-in-chief was hardly her idea of a dream job. But she jumped tentatively, feet-first, into the DIY world anyway.

“It was actually really fun. It was such a typical learning experience. Like I remember the first time I printed it, I laid it all out on the computer and went to print it and the printer was like, ‘All the files are low resolution,’ and I didn’t know what that meant. I didn’t even know any of that stuff…I would just Google ‘how do I do this?’ and watch a million YouTube tutorials.”

Editorial was inspired by another Mile End-based magazine that suffered a shorter life span.

“Emily Kai Bock started a magazine here called Beaubien Magazine and it only lasted for three issues or something. But she made it and did it all herself and had launch parties to raise money. And it was the same size and the same kind of content [as Editorial]. Then she stopped doing it and I kind of wanted to take over doing it because it was so cool. And I still like look through it when I’m putting this together.”

Though Editorial started as an online venture funded by Milbrath’s unemployment insurance, she now works with three other girls, one of them her sister, to print the magazine four times a year. The unemployment insurance is no longer necessary, but Milbrath admits that with printing comes great financial and editorial responsibility.

“I think it only got really hard when I started printing it. Because then [the magazine] was a financial risk and advertisers need it to be out by a certain time. [Before] it had just been me working on it in my bedroom and suddenly it was stressful, and if it was printed wrong, I was responsible for that.”

Milbrath is modest, though, in a way that many publishers of successful independent magazines are not.

“It’s getting a lot easier though. I think it’s kind of legitimizing to have the material object. It’s a funny thing and artists take it more seriously, like [they will say] ‘Oh, it’s for print. Okay I’ll make you new work.’ And it’s a funny thing because I don’t think very many people see the actual printed magazine, like in real life. But it’s such a precious thing in society to have a printed art thing.”

The magazine has a very small print run at 300 copies an issue. Most can be found at various vintage and book stores in Mile End, while some are shipped to New York and Europe from Editorial’s online store, and many (maybe not surprisingly) sell out in Japan. “My friend lives in Tokyo and distributes the magazine there. And it’s weird because they always sell out there and they’re like, ‘We need more!’”

Milbrath hopes that in the near future she’ll be able to afford a larger print run, commission artists, and pay her staff.

“I just have small goals. I also really want to get some sort of corporate sponsor. I know it’s super lame, but it would just be such a weight off my shoulders if there was like someone, or a patron.”

For now, however, Milbrath accepts the silver lining that comes with having no money.

“It’s kind of cool though because not having money makes it a different kind of publication. And the artists that do new work for it … I’ve had people tell me they won’t do work for free, but they’ll do it for certain publications that are the kind that are cool that don’t have money.”

Milbrath admits that Editorial’s fate is tied to Montreal in more ways than just the cheap cost of living — that simple practicality that makes it possible to publish a magazine out of one’s bedroom.

“Like so much of the magazine is just people I’ve met in Montreal that are doing stuff no one knows about. And it’s just so cool, like I’ll meet someone at a party and then we’ll meet up for an interview and I’ll go to their house and take their picture. And then I print it here, too. It just feels like I can do everything in the neighbourhood. It’s pretty cute.” ■