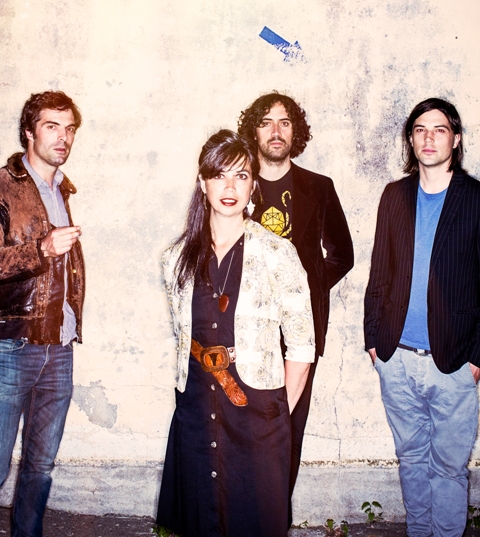 Andrew Barr’s first stroll down the streets of Bamako left him speechless. It wasn’t the poverty that overwhelmed him — the Rhode Island-born drummer had braced himself for that since long before venturing to the Malian capital. What moved him all the more was the West African city’s underlying joy, which pulsed like a steady backbeat underneath its more frantic rhythms.

“One thing the men do there is hold hands while they’re walking down the street. So my first day there, I’m on the sidewalk, holding a man’s hand, laughing. You start to wonder if that’s why the music is so rich there, when you meet the people that are making it,” Andrew says, describing the trip he had taken 15 years ago to study Mali’s unique style of percussion.

Those tenacious African rhythms still influence Andrew today, as he drums in the Barr Brothers alongside his elder sibling Brad, multi-instrumentalist Andres Vial and classically trained harpist Sarah Page. The Montreal based foursome’s latest album, Sleeping Operator, is not the often maligned banjo-laden fare made famous by Mumford & Sons and their legion of imitators. No, the Barr Brothers’ brand of alt-folk is far more eclectic and subtle than that. In fact, Andrew says this current project has allowed him to truly tap into his Malian muse for the first time.

Specifically, Andrew credits Page with unleashing that new approach, saying: “The harp is often depicted as this angelic, sweeping instrument. But Sarah had a desire to dig into some rhythmic music, and we recalled all these West African songs that use kora harps. So we thought: ‘Let’s explore those textures, and groove out together.’”

Brad Barr describes how he first heard Page’s inventive strumming before he even met her, as those pulsing vibrations seeped through the paper-thin walls of her apartment, which neighbored his. Whenever her harp notes drifted in, Brad would scoop up his guitar and play along, until he eventually decided to knock on her door so that they could finally meet outside of the melodies. “I remember… thinking how, in the right hands, with the right collaboration, this could be a whole new sound, uncharted, inspired,” Brad wrote in the email about Page’s playing, before adding: “I also remember thinking how much work that would be. None of this has changed. And it has been a very patient process of getting to know each other’s tastes and temperaments; knowing how much, and in what directions, I could impose my imagination on her and her instrument. We are still in a process of understanding the possibilities. I think that’s the beauty of it.”

Andrew adds: “She was up for it, and we started dirtying up the harp by running it through a distortion pedal on an old Magnatone amplifier, and just exploring the possibilities.”

The drummer describes how Page’s unabashed approach to the harp— and its unintentional similarity to Malian kora strumming— emboldened his own drumming: “West African stuff always influenced me and Brad, but we never had the desire to wear it on our sleeves… (The Barr Brothers) became the context to make use of those influences, and I feel like we’re just scratching the surface of that.”

The percussionist cites “Half Crazy” and “Bring Me Your Love” (Sleeping Operator’s ninth and 10th tracks, respectively) as examples of when that Malian influence was fully realized. The former sounds like a swampy Delta Blues number, until Page’s harp begins to flare like a fresh bruise, and Andrew’s drum palpitations swell in adrenaline-laced, irregular patterns.

That’s followed by Page’s plush, chiming strums on “Bring Me Your Love,” which seem to echo East Asian incantations, until Andrew’s abrupt drumming kicks in. On that song, he pounds out a ratcheting beat reminiscent of an engine that stubbornly turns and sputters, before finally bursting to life like a derelict vehicle unearthed by the side of a craggy Third World highway.

Andrew was first exposed to that boundary pushing Malian percussion style when he met Abdul Doumbia, a drummer from Bamako teaching music at Rhode Island’s Brown University. The Barr Brothers’ father was a local dentist who treated Doumbia for free. They bonded and the Malian drummer returned the favour by giving Andrew drumming lessons, and eventually inviting the young Barr to accompany him to Bamako for further tutelage.

Andrew says he was drawn to that Malian percussion because of its “tension in between straight time and swing time. These guys are just masters. It’s what allows them to play the same thing for 45 minutes while people are dancing, and it never gets old, because every measure has the ability to be felt in different ways. So I was intrigued that there was so much complexity in something that seems so simple. It’s not linear, like our classical music or songwriting. It has this stacked
feeling to it, more of a vertical approach where cycles go on and on.”

Those vibrant rhythms stood in stark contrast to much of what he witnessed during his trip. Andrew adds: “The poverty is inscrutable, and you want to help, but there’s so little that’s being done. You see all these children suffering from serious malnourishment. And yet the music and joy that was still coming out was mind-blowing. It was contagious.”

Brad, who was also deeply influenced by Doumbia’s lessons as a teen, conceded that the Barr Brothers are far from the first western act to draw on African influences. But he adds that what sets their approach apart from that of Paul Simon, Plants and Animals or Vampire Weekend is “the way we like to swing it. Because we’ve been playing with that feel, the 6/8 bell pattern and all its variations, it’s something we’ve gotten very loose and comfortable with, which makes improvising and composing that much more fun. It’s not something we deliberately try to use, it just creeps in naturally. I hear it everywhere.” ■

This article appeared in the Nov. 2014 issue of Cult MTL.