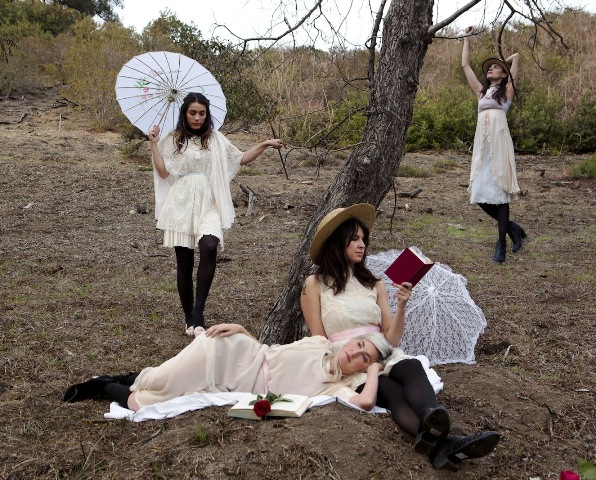 Warpaint is an all-female four-piece indie rock unit from L.A., namely singer/guitarist Emily Kokal, guitarist/vocalist Theresa Wayman, bassist/vocalist Jenny Lee Lindberg and drummer Stella Mozgawa. The band has been together for a decade, but it was only in 2008 when an EP called Exquisite Corpse heralded their existence off their home turf. Their 2010 LP The Fool really put Warpaint over the top, particularly in England, where the band is signed to the grandaddy of indie record labels, Rough Trade.

This year Warpaint released their sophomore LP, a self-titled record that’s at once leaner and more cavernous than their debut. The band coproduced with Flood and hired Nigel Godrich to mix the record. was I spoke to Kokal in late September, when the band was nearing the end of a two-week stretch of time at home in California (albeit not with a minute of time off) after a long year of touring. Our conversation touched on the band’s democratic M.O., how they worked a legendary producer into the mix and why people think they’re a pack of hippie witches.

Lorraine Carpenter: I read that you guys are already working on material for a new album. Has that happened on the road?

Emily Kokal: Yeah, we do sometimes write together on the road, which is really nice. We have practice amps that we bring backstage and we’ll all play together, we’ll all warm up together. Sometimes we’ll make up new things, but a lot of times we make up stuff for the set. When we’re on the road, our focus is on improving the show because that’s where our attention is. We compulsively work on our set and change it just to keep it fresh for ourselves so we’re learning songs from the album that we haven’t played yet. When we get home in December, we have a nice space where we built a studio that we have yet to totally utilize — we’re really into [that idea] now.

LC: How did you approach the making of the latest record? Were there creative plans or different methods in place?

EK: We sidestepped that kind of anxious second-album feeling that you can get. The Fool took a long time to make; it was that first-album kind of thing where you bring in your whole life of songs and experiences. What was cool about this album was that we hadn’t really written with Stella from the ground up; on the last album, she came in 30 days before we recorded, just helping us out. We had never really even played shows with her or anything, so this was really the first album for this band. When we started writing it, there was so much coming out of us because we’d never had the chance to write together and we’d been touring for a year and a half.

There are things on the newer album that I like more than the first album but on the first one there’s a real explosion of a band sound whereas the newer one is little more minimal. That’s definitely what we were going for at the time but I’m in a phase now where I want to go in a different direction. You scratch that itch in the moment and then your tastes change and what you want changes. I don’t really like us to stop and define ourselves and go, okay this is who we are, this is how we sound, we’re going to make music like this forever. It’s an ongoing experiment; recordings are just markers in time.

EK: Everybody has a pretty strong voice in the band already, so if someone comes in as a producer, they have to mainly know how to navigate between our ideas — we’re the captains of the ship.

When Flood came in, he was really good at being a chameleon and feeling out our style and getting into our language and learning how to communicate with us. He was good at trying to help us organize our ideas with each other, which is nice. Sometimes we can get really carried away and intent on something and it’s nice to have someone come in and say, “Just try and ride this out, and relax.” We mainly need someone to keep everything moving and keep everything smooth while we’re in our heady little process.

LC: I’ve read about how the band has developed this “hippie witch” image, and that it’s partly due to mystical content in your lyrics. Is there anything else behind that, aside from lyrical content?

EK: We definitely come across as pretty down to earth, natural, Calfornia, Oregon, West Coast types, especially for people from other countries, where there’s a whole mystique about California. It’s hard to understand anybody’s perception of you. I was raised very progressive, vegetarian, natural healing, alternative medicine — that’s just what I know. I think of music as alternative medicine. That’s why I started playing guitar and that’s why I started singing ’cause it was a release for me in a way I hadn’t been able to get as a kid. Here I found a way to use my voice and use music to express certain things that I didn’t know how to get out.

When certain artists resonate with people, it’s because they give them a voice; they give their acute feelings a voice. Everybody’s attracted to different voices but they’re attracted from a kinship. The feedback I get from our fans is that [our muisc is] emotionally cathartic for them, it helps them through difficult times. There’s a depth to it which I think is something that we bring — I bring my heart and soul into singing and lyrics. Writing a lyric and singing a part that feels almost like a primal scream is an interesting thing to do to yourself, ’cause then you take it on tour and have to do it every night. But I do it for a reason.

I can understand how, especially people who don’t have their own sense of spirituality or their own in-touch-ness with the depths, can kind of make fun of it, or not understand it and it goes to this, “Oooh, it’s sorcery” thing. I can undertstand how it has a spiritual, mystical connotation though. I mean I’m drawn to things like that; I’m drawn to finding my true voice, expressing myself, finding out what I really believe. I’m a searcher, I’m a seeker, and I do it through music, so if people get that back, I don’t really mind it at all. ■