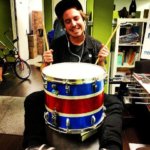 CMJ Music Marathon happened last week in NYC, mounting its usual mix of lesser known bands and bigger name acts. Plenty of Montrealers make the six-hour drive to attend this five-day event, which happens throughout Manhattan and Brooklyn. CMJ’s not as hectic and noisey like SXSW but there’s the same spirit of business and pleasure. To stay healthy and happy, I ate Chipotle & Whitecastle multiple times a day. I also gave out lots of change and leftovers to homeless people (and probably a few hipsters by accident).

Last time I attended a U.S. festival, I witnessed a car chase that ended up killing four innocent bystanders and injuring 21. This time around, I was in middle of the action again: ebola decided to pop up in the same hood I was staying in. The infected person visited a Brooklyn bowling alley the day after I did. I woke up to 15 text messages from friends telling my germophobic ass to lick every bowling ball in Brooklyn and to touch everything in Manhattan. For the remainder of my trip, I would sprint like Forest Gump everytime I heard a sneeze. I even met Winona Ryder and refused to kiss her, just in case.

Luckily, the only thing I caught was shows, including two that I curated at Baby’s All Right in Williamsburg and Arlene’s Grocery in the Lower East Side.

Here are the best Canadian bands I saw at CMJ:

A l l i e is from Toronto. She’s my new thang and she crosses my mind a little too much. She has worked with producer Elaquent and worked her way into my heart. She reminds me of a young Lauryn Hill. It was an honour to be part of her first gig outside Canada. Catch her first Montreal show at M for Montreal this November.

Lydia Ainsworth is signed to Montreal’s Arbutus Records. Sounds like Enya topped with Lana Del Rey and a side of Grimes. She performed Chris Isaak’s “Wicked Game.” (I was born in the same hospital as Chris Isaak, this must be why I gots Wicked Game.)

Homeshake is Peter Sagar, formerly of the Mac Demarco band. There’s a heavy dose of buzz in their sound and everything seems to be happening in slow motion. Blotter popping grooves.

The Muscadettes are a pair of California twin sisters raised in Montreal. The minute you lay eyes on them, the butterflies will hit you, and so will their impressive ’90s crafted garage pop.

Considering all the U.K. and U.S. pros I saw checking em out, HEAT are definitely going places. Let the band buzz begin.

The Posterz brought their indie hip hop to NYC for the first time and were able to make plenty of new friends by the end of the show.

Tei Shi lives in Brooklyn but was raised in B.C. She also lived in Montreal at one point. She played more gigs at CMJ than anyone. Beautiful pop tunes destined to pop. She too will play her first Montreal show at M for Montreal this November. ■