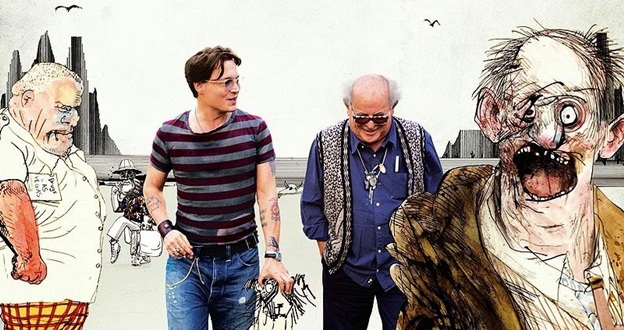 Ralph Steadman’s artwork, much like Picasso’s cubism or Van Gogh’s post-impressionist paintings, are immediately recognizable. His Pollock-esque drips and flicks weave their way through often aggressive and gruesome works, which poke holes in public opinions and demand our attention. Steadman most notably provided the images for Hunter S. Thompson’s Fear and Loathing in Las Vegas, and collaborated with the beloved gonzo journalist and author on many projects.

We spoke to director Charlie Paul about his documentary For No Good Reason, which explores Steadman’s life and work, and to the artist himself.

Kayla Marie Hillier: What interested you in Ralph’s work and what made you decide to make For No Good Reason?

Charlie Paul: I came out of art college as sort of like an ex-punk. I was very interested in music and counter-culture and Ralph’s art, at the time, just spoke to me. [He was] one of the few people addressing the things that I was interested in: equality, charity, all kinds of things. He was an anarchist in the art world for me. I was literally attracted to his work. At the time — this is all pre-Internet — Ralph would appear out of nowhere every year or two with a new book and then it’d all go quiet. He was a mysterious figure who I just wanted to learn more about. In the end I managed to track Ralph down and I sent him a letter. He responded with an invite down to his studio. That was the beginning of the whole thing.

The first time I met Ralph he gave me a large cardboard box full of video cassettes and said, “Why don’t you look through these?” And as I did, Ralph’s life over the past 30 years started unfolding in front of me. And basically, ever since, I’ve been down where Ralph lives just looking through archives, finding stuff. Ralph is great collector of bits and pieces of memorabilia. The studio was the perfect place to investigate his story.

KMH: I’ve read that it took you 15 years to make the documentary. Was that from the initial contact and going through all the archives to the finished product?
CP: Yeah, I say 15 years because the earliest piece of film found in the movie, I shot in 1998. I was always shooting bits and pieces. From the very outset, I positioned a camera above Ralph’s desk and I gave him a remote and a big button for light and I’d leave him in his studio and go back to London. During the week Ralph would film his own work clicking away and drawing, taking single frames of his art as each painting progressed. So there became a kind of ongoing scenario where Ralph would agree for me to go down, take the chip out of the camera, put a fresh chip back in, talk about the stuff we saw, and do a bit of interviewing, and on it went. For many years it was just an ongoing process of collecting this material and investigating the stories Ralph was interested in.

KMH: Ralph, when you first started going to the United States and with the advent of gonzo journalism , did you have any idea that what you were doing would have such a resonance and that it’d still be relevant now?
Ralph Steadman: You really think it is?

I came to New York just to look for work and I stayed with a friend who’d invited me to the Hamptons. I was with him and his wife-to-be Pam when I got a call  saying, “How would I like to go to Kentucky and meet an ex-Hell’s Angel who’d just shaved his head?” And so I said, “What do you mean? What’s-his-name Johnson?” And he said, “No, Thompson.” And I said, “Never heard of him, no.” He’d written the book about the Hell’s Angels and so I said, “Okay, if it’s work, I’ll go.”

I got introduced to the magazine called Scanlan’s, and Scanlan was the name of a little known Nottingham pig farmer from England — why I remember that name I have no idea — one of the jobs we were going to do was to investigate the dirty kitchens of New York. They went through three quarters of a million dollars in nine months trying to be a magazine. They just threw the money everywhere. The editors were a guy called Sidney Zion and Warren Hinkle III. They asked me if I’d go and meet Thompson, so I did. The thing was that on the way to the airport, I stopped off at Don Goddard’s, who was a writer and editor, and his wife Natalie, she was one of Revlon’s representatives. She had all these eyeshadow samples and things like that. And I’d left my inks in the cab on the way to their place, so she gave me a load of her old samples which I used — lipstick, eyeliners, things like that, that’s how I did my drawings for the Kentucky derby.

KMH: Was it difficult to work with Hunter? He seems like a bit of a difficult personality.
RS: No, not at all. He’s a pussycat — so easy. He was a softie.

Look, he was one of Kentucky’s favourite sons. They call him the son of the Kentucky pioneers and he was one of those, but he was also — I was just so innocent abroad and he looked at me as someone who could become part of his story. He didn’t want a photographer. He wanted somebody who could become part of the story. And so I did. That’s what gonzo was in the end. Gonzo, I believe it’s a Portuguese word, it was coined by a guy called Bill Cardoso. He was from Sausalito over the Golden Gate bridge and he worked for the Boston Globe. He rang Hunter and just said, “Hey man, that was pure gonzo.” And Hunter said, “Gonzo? What’s gonzo? I like the word. That’s what I’ll use. That’s what I do: gonzo journalism.” And that’s how it got invented. Just by chance.

KMH: Charlie, did you get the opportunity to meet Hunter before he passed away?

CP: I didn’t. One thing that I found in this box of tapes was this amazing footage Ralph had shot of Hunter and himself talking at night over a bottle of booze and a pack of fags and I have these amazing, intimate, conversations that I knew as a director I could never get back. So I didn’t feel as if I had to go down there and meet him. I felt I had the footage I needed. Half way through my process, Hunter took his life and it really felt like it was meant to be. I never made the trip over to ask about Ralph. I don’t think the film would have benefitted from me going into Hunter’s space. He distrusted filmmaking, so I don’t think he would be an easy subject.

RS: Hunter in 2005, February 20, he rang his wife Anita, who was doing her sort of workout at a health club, he rang her there and he spoke to her and that’s when he put the gun in his mouth and pulled the trigger. The bullet hole is still in the kitchen.

The sheriff at the time, he called all of the 25 or 24 sheriffs in the counties and said, “Come to Owl farm, Hunter’s shot himself.” And they all stood around Hunter’s body which had fallen to the ground and they took one of Hunter’s books, any one, they just opened up a page and each of them read a page over the body as kind of a moment. They revered him, although he could be a bloody nuisance; they still liked him. It was great, when he went…

KMH: Do you ever get tired of people speaking to you about Thompson?
RS: I was warned not to pick up the phone after his death because of the press. It went on for ages, it’s still going on — but I do miss him, for sure.

People think I’m a nasty piece of work, I must be to do such angry drawings. Like I’m just jumping up and down and gnashing my teeth. But I’m not. I get it all out on paper. That’s where it belongs. It can only do damage visually, it can’t do any physical damage, which is a thing I totally object to. I don’t like violence, you see. But who does? Nobody should. I mean, everywhere, Afghanistan, Syria and God knows where else where the fighting breaks out, people bashing the hell out of each other — if only people would just go and buy loads of custard pies! And focus the pies at each other and have a good old war and get it out of their system. Custard pie war. Can you imagine that? It’d be a mess, but war’s even messier godammit. ■

For No Good Reason is available on DVD now. Check out the trailer here: