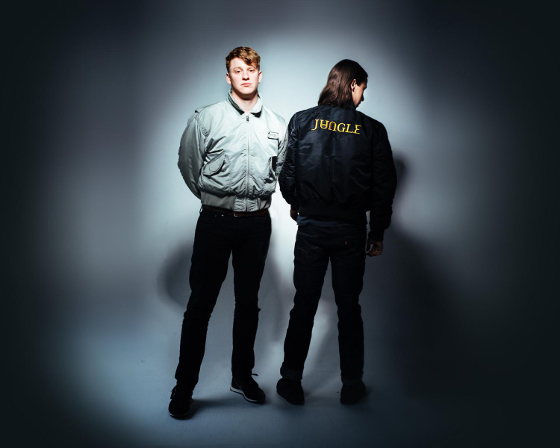 The Mercury Prize-nominated mid-tempo grooving and falsettoing of London duo Jungle might recall a ’70s Saturday Night Fever jolted into the present day wearing Adidas tracksuits. Their Montreal live debut, where they’ll balloon to a septet, might further reinforce the new disco-soul vibes.

By phone from Louisiana, Josh Lloyd-Watson — who simply goes by J to complement bandmate Tom McFarland’s T — suggests that it’s not the Bee Gees they’re going for on their eponymous first effort and colourful dancing music videos (which they don’t appear in). They consider themselves producers first and foremost — ones who might have stayed in the studio if not for their immediate success.

“J Dilla would use an MPC and a vinyl player and cut things up. For us, we’d have the MPC, but we would be sampling off our own recordings,” J said.

Here’s the rest of my interview with J.

Erik Leijon: Do your dancing music videos set the tone for the live shows? Do people dance?
J: Yeah, they go crazy. I’ve thought about that a little bit. It’s hard to tell if that’s the case. I’m thinking it might have an effect on the way people move at shows.

EL: Do you write the songs with dancing in mind?
J: We’re open to writing songs any way, and we had to teach ourselves that for this album. We have spent a lot of time playing and making music, and trying to be things that weren’t 100 per cent honestly us. Me and T start by putting beats down and the ideas flow naturally after that. We’ll invent scenarios, like movie scenes. Jungle for us is building a world, and populating it with characters. For “The Heat,” we saw a beach at nighttime, and the High Rollaz on roller skates you see in the video would live by that beach. We’re the soundtrack to movies we’ve built in our heads.

EL: Are you inspired by famous movies about dancing?
J: Not early on. With “Busy Earnin’” [scroll down to watch it], there was a feel of Michael Jackson’s “Beat It,” “Bad” and “Thriller.” Those videos are amazing, and no one is ever going to beat them.

EL: Would the two of you ever dance in a video?
J: I think then we’d become OK Go. It’s not about us, it’s about the other dancers, people who are actually good at it and can express themselves that way. It’s the same thing with us not being in our band photos – nobody likes having a photo taken of them. We’d rather create the image, because we’re escaping into our music as much as anyone, so to put our faces in the front of it, it would be like Steve Jobs using his face as Apple’s logo. Not to compare us to Apple, but the Jungle name is a world we live in where we can put our egos aside.

EL: You and T played all the instruments on the album. How much of it is live instrumentation and how much of it is samples or software? It’s impossible to tell.
J: There’s no software stuff on there. It’s pretty much all live audio recording, but manipulated in order to sound electronic. There are synths on there, but warm analogue ones. Most of the album was recorded that way, and then re-sampled. We wanted a record that sounded like it was sampled, but to not have to lift samples from other people. So everything was made by us, and it was inspired somewhat by Kanye West, strange as it sounds. We thought about “Touch the Sky,” but wondered how it could be done without sampling one of the best horn and string riffs ever written. You can’t beat it. How can we create something that sounds modern and sampled, but will still sound familiar to people? We wrote tracks and then cut them into pieces and re-sampled them. It was really us trying to use J Dilla techniques, when he would grab a bossa nova record, cut out the best bar from it and make it the groove. “Busy Earnin’” started as a seven-minute psychedelic track. It was a funky jam without a structure, and we took the horns and started playing around with looping it. Early songs we wrote, “Son of a Gun” and “Lucky I Got What I Want,” if you take the vocals off them, they have these slow grooves at ’90s hip hop tempos.

EL: What was the rush like to get the album done? Your first video, “Platoon,” came out in June 2013 and the album was out a year later.
J: It was a weird one because we started in February 2013 without even a name, and it just kept getting more intense. When we started do more songs and putting them out, the world became aware of who we were, and for our fifth show we opened for Haim in front of 5,000 people. We started writing in my bedroom (in Shepherd’s Bush) and went to the XL studios for a mid-recording pick-me-up.

EL: Everyone’s rocking the Adidas tracksuits in your videos. Fashion tip for your upcoming show?
J: People wear Adidas to the shows. Adidas started, like a lot of things with Jungle, as an inside joke between the two of us. T grew up wearing Adidas and when B-Girl Terra showed up in an all-in-one shell suit for the “Platoon” video shoot, T went mental. It became a theme, we made sure the High Rollaz had Adidas on as well. We’re not sponsored by them. Maybe they’ll give us a call soon. ■