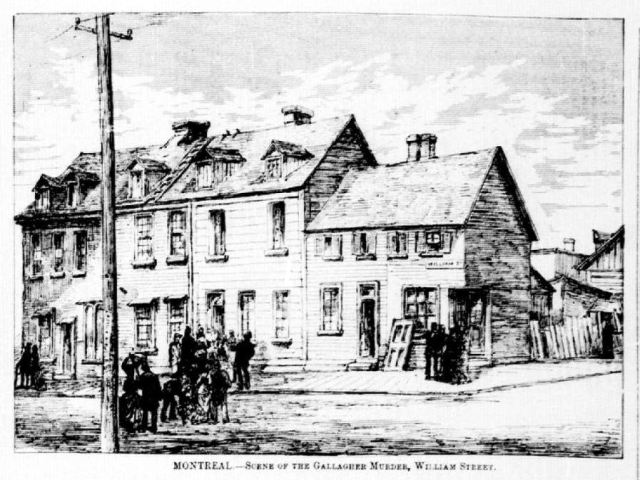 It’s that time of year when nights grow colder and our collective senses become a little more attuned to the things that flit along the edges of the great ethereal plane — or perhaps just in the darker corners of our imaginations. And while most Montrealers chalk up those unexplained feelings of dread to a subconscious awareness that a long and depressing winter will soon be upon us, others, such as Donovan King, know that the city around us is teeming with its fair share of spooks and spectres.

From the headless phantom of Mary Gallagher, said to appear every seven years on the anniversary of her murder at the corner of Murray and William Street in the heart of Griffintown, to the ghostly apparition of an Algonquin warrior rumoured to appear on the bluffs overlooking Mount Royal Cemetery, there are more than enough tales to put weight behind the claim that Montreal is the most haunted city in North America.

This is a claim that King, who is a teacher, historian, actor and activist on the city preservation scene, is eager to prove. For nearly a decade, he has been leading tours around town that expose some of the lesser known and darker aspects of our city’s history.

King cut his teeth in the early ’90s working for a Hollywood designer named Bob Short, famed for his Oscar-winning work on the film Beetlejuice. Short was setting up a giant haunted house in Decarie Square at the time and hired King to train and direct actors. This was followed by an overseas stint that saw him guiding haunted tours of the infamous London Dungeon.

Since his return to Montreal, he has worked with Fantômes Montréal, a tour company based in the Old Port, and is now in the third year of conducting his own tour, Haunted Montreal, which focuses on the haunted history of downtown, in addition to other sites around the city.

Ahead of this year’s series of tours, which typically begin at sundown with a rendez-vous at a local watering hole (crucial for those who need a good, stiff drink to summon up the courage to confront Montreal’s spookiest spirits), I reached King by phone to get the low-down on the spectral scene.

Michael Sallot: How do research the stories that you present on your tour? Where do you begin?
Donovan King: Well, I am an English teacher, a drama teacher, but also history teacher, so I know the tricks of the trade in terms of delving into the archives and finding things like historical accounts and newspaper articles.

It’s remarkable because even as far back as the 1800s, and as far back as New France, people were recording these types of stories, so it is just a matter of finding them. Then there is also the matter of interviewing people. A lot of people have stories that they want to tell.

On my new website, I invite people to share stories so a lot of people are sharing their own personal anecdotes. And thanks to the Internet, you can go online and find first-hand accounts on Trip Advisor, for example, of people staying at places like the Queen Elizabeth Hotel who might have experienced something paranormal. You’ve also got these paranormal societies online, who have their own theories about which places are haunted and [they will go] and do their own investigations. It’s really a matter of going to various different sources and trying to stitch together the stories based on all this information. Of course, these being ghost stories, there is no real way to prove whether they are real or not!

MS: You mentioned that when you look into the archives, you find ghost stories all throughout history. Why do you think these stories have always resonated with people?
DK: I think a lot of it has to do with the fact that these stories deal with the unknown, they often deal with death, and these are the great mysteries of humanity. Also, as we see religion starting to recede, it becomes more and more acceptable. These stories all used to be very taboo and forbidden within the Christian church. Because they were so taboo and tantalizing, that is one of the reasons why people are liking them more and more.

MS: Have you ever had a guest on one of your tours turn you on to a ghost story that you hadn’t heard about previously?
DK: Absolutely! People often tell me stories that I have never heard of. The other day, one lady told me that she had worked for her whole career in a place called the Standard Life Assurance Company, which was across the street from the Ritz-Carlton. There was rumoured to be a ghost in the lowest level of the parking garage. She had heard from other employees that this was the ghost of someone who used to live in the mansion that was on the site, when it was the Golden Square Mile. Apparently the owner of the mansion had a son who was an alcoholic. That was what killed him and the rumour is the son’s ghost is looking for the wine cellar down in the parking garage!

MS: In your opinion, what is the creepiest place in Montreal?
DK: I’d probably say Mount Royal, and that is because of the few giant cemeteries up there, which constitute the largest intact burial grounds in North America. There are a few other stories up there. There are other human remains on the mountain that aren’t as well advertised. For instance, [fur-trading baron] Simon McTavish’s tomb is just above McGill Street. You’ve also got things hugging the mountain that are very haunted, like the Royal Victoria Hospital and the Alan Memorial Institute where they did all those horrible brain-washing experiments. There is so much creepy stuff up there!

In my opinion, our most delicious ghost story is the story of McTavish. Back in the 1800s, his ghost was said to toboggan down the slopes of Mount Royal. Not in a toboggan or a sled, mind you, but in his own coffin! It’s an amazing story that has been forgotten over the years. He had a castle on the mountain, and that was demolished, and they used the rubble from that to bury his mausoleum under earth and stone. McGill students were breaking into it. It’s a wonderful Canadian ghost story — it’s like our own legend of Sleepy Hollow!

MS: What would you say to anyone who would dare challenge Montreal’s reputation as the most haunted city in North America?

DK: Well, I would tell them to look at the history books to begin with! For example, Niagara-on-the-Lake claims to be the most haunted city, but if you look at their history, there has only really been one incident there, which was the War of 1812. Whereas Montreal has a rich, rich history dating back to being a centre for trade and diplomacy with the First Nations, New France was set up in this area, the British conquest — and even the Americans took over this city in 1775 for a year.

There are layers upon layers of history in this city that you don’t find elsewhere in this country and a lot of it is very tragic and oppressive, and when you have that type of history, it often results in these types of ghost stories and hauntings. So, if someone were to say that another city could take the title, I would ask them to prove it.

We also still have most of our historical buildings. Once you demolish that, like they have done in Toronto, it is very difficult to pin-point the hauntings just because there is no infrastructure left — just glass office towers and condos. ■