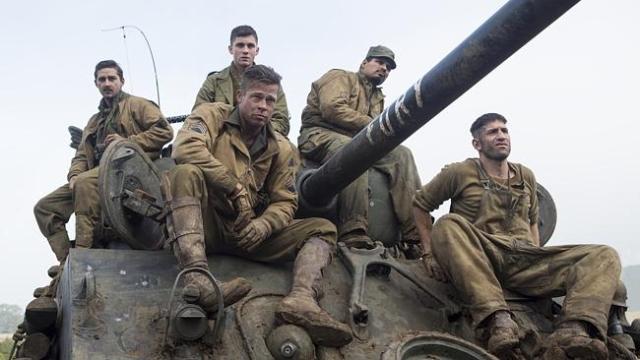 I certainly never would’ve pegged tough-guy action auteur David Ayer to be a François Truffaut fan, but his new movie Fury certainly points to the fact that Ayer never heard the oft-quoted Truffaut claim that it is impossible to make an anti-war film because war always looks exciting. Ayer certainly seems to think war is exciting — in fact, he seems to think it is the raddest expression of manhood next to being a cop (the subject of nearly every other Ayer film up to this point). As a former U.S. Navy submariner, Ayer undoubtedly understands the military better than I do, but that doesn’t necessarily transpire in his latest effort.

It’s April 1945. The war is drawing to a close. Hitler has less than a month to live, but these facts are not exactly common knowledge on the battlefield. The crew at the head of a tank dubbed Fury has just moved into Germany, having lost a man somewhere along the road. They’re assigned Norman Ellison (Logan Lerman), a young typist clerk who’s somehow found himself on the front lines even though his skills involve typing and not much else. Norman is hardly appreciated by his crew, led by grizzled badass Wardaddy (Brad Pitt); he’s incompetent and a pacifist, which raises the ire of his fellow soldiers: the bible-thumping zealot (Shia LaBeouf), the psychotic yokel (Jon Bernthal) and, uh, Michael Pena (Michael Pena). Crammed together in a tank that’s barely holding together, the men spend the following 24h continuously mowing down Germans while half-heartedly calling it the “best job they’ve ever had.”

Fury gets a lot of mileage out of the fact that, while there are at least half a dozen good-to-great submarine movies, there are no great tank movies. The claustrophobic interior of the tank coupled with its firepower makes for compelling action scenes, but Ayer doesn’t fully exploit the cramped quarters of the tank in character development. Whenever the characters have a chance to get out, they do — whether it’s to go and act rapey in a town they’ve just taken or to force Norman to gun down an SS officer they’ve taken prisoner, just to show he can — and forfeit a lot of character development in the process. The film shows us characters in situations that certainly make it seem like war is hell, but they mostly just whoop and yell about killing krauts. For all the dirt, grime and blood they’re covered in, they sure seem to enjoy stabbing dudes and making their heads explode.

Considering the film promises us 134 minutes of five dudes in an enclosed space, it’s disappointing that none of the characters ever rise above the rank of crude sketch. Wardaddy is a badass with a heart of gold, forcing his men to kill people in cold blood and then privately crying about it. Bible (the character played by LeBeouf) quotes the Bible incessantly, but doesn’t really look negatively on his cohorts’ more dubious actions. Coon-Ass (the Cletus-esque lug played by Bernthal) is your garden-variety psychotic, violent and moronic hillbilly, while Pena’s major character trait is periodically swigging from a bottle and yelling in Spanish. It’s nice to see LaBeouf and Bernthal out of their comfort zone (the former never uttering a single rapid-fire “Nononononononono”) but characters should be more than a dumb haircut and a moustache.

Ayer’s mostly made the same kind of movie since his directorial debut, Harsh Times, in 2005: movies about males bonding in situations of extreme stress and violence. Some of them (like Sabotage, the ill-advised Ten Little Indians riff starring Arnie) are terrible; others (like the nervy, intense cop thriller End of Watch) are great. All of them celebrate a certain type of rah-rah American machismo that Ayer half-assedly tries to subvert here without much conviction. Norman is initially shown as a pacifist, refusing to shoot a German child that eventually ends up lighting another tank in their battalion on fire. A mere day later, he’s cackling wildly as he mows down Germans — having not so much been broken but simply converted, it seems, by a couple of days down a hatch with some bros.

That having been said, Ayer knows a thing or two about action scenes and puts that to incredible effect in the film. Brutal and uncompromising, the action scenes are amongst the more electrifying I’ve seen this year. The final sequence, a bravura 20-minute onslaught of carnage that frequently dips into straight-up fever dream material, is shrouded in eerie orange smoke that recalls a John Carpenter movie more than Saving Private Ryan. If Ayer had brought more of that otherworldly, horror-movie brutality to this film, he might’ve had a bonafide war classic on his hands. Instead, too much of the macho posturing of his other works seeps in. Still, Fury is just about the best tank movie ever made. ■