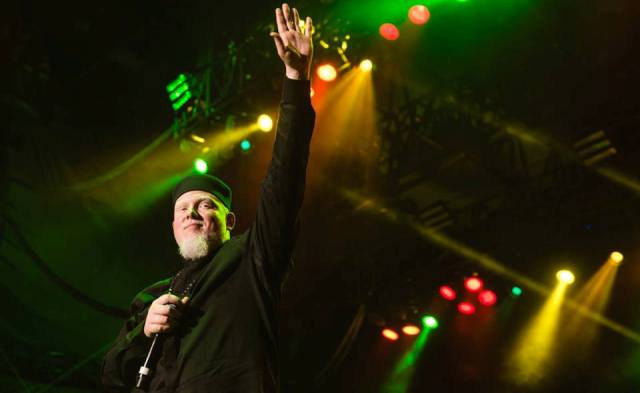 Brother Ali wasn’t trying to be political at the outset of his rap career. He knew he was better than most rappers out there, and came gully and introspective in equal measure, but it wasn’t until his second full length LP, several projects into his career, that he opened up with some more overt sociopolitical commentary, notably with the track “Uncle Sam Goddamn.”

Further cementing his dedication to the people and positive ideologies in the face of negative realities around us with his 2009 album US and 2012’s Mourning in America and Dreaming in Color (each of which has further elevated his profile on the indie music scene), Brother Ali has not visited Montreal since April of 2010.

The Rhymesayer comes to Phi Centre on Tuesday on his Home Away From Home tour, and I caught up with him from the road to find out what he’s been getting into since last we spoke.

Darcy MacDonald: So the last time we spoke, you were about to tell me a story about Public Enemy and your kid’s birthday. My phone died and I never got to hear it. What was that story? It’s been bothering me ever since.
Brother Ali: Yeah, so, the day that I met Chuck D was the day that my daughter was born. I was scheduled to be at (a speaking event with Chuck), and it was a few weeks after my daughter was supposed to be born, but she came really late. And they ended up inducing labour, because she was so late. You don’t get to decide the date for that — at least we didn’t, in our situation.

So they were like, “Okay, this coming Wednesday night, we’ll schedule it and we’re gonna start.” And I was like, oh man, that’s when I’m supposed to connect with Chuck D! We asked them, you know, how long does it take, once you start the drugs. It takes several hours. So we scheduled it in a way where we didn’t think anything would really start happening until the event. So it was really an interesting and meaningful day. I went and met him and we’ve been friends ever since then. So we always talk about the fact that I know exactly how long we’ve known each other, because it was the day before my daughter was born.

DM: On this tour you’ve been doing these video updates. What’s behind that?
Ali: If you don’t have video content regularly, people don’t believe things are real. Even a song, like, if you put a song out and you stream it, if there’s no video it’s almost like it doesn’t really exist. So I’ve been putting up video content every week or so from the road. This tour is called the “Home Away From Home” tour. I’m playing places that I’ve been playing for a long time because I feel I have a connection with them, and the experiences I’ve had there. So in each video I talk about one of the cities I’ve done in a week and how it is a home away from home for me and why.

It’s a way to get people to understand what this tour is about, because I don’t have a new album. I wanted to see if I could tour that way, where there is really no hype. Can I just show up in these cities? In most places I’m doing a smaller room than I would if I had a new album, and I was more visible. Do a small show, have my friends come out, have a good time, and so far it’s been going really well. I wanted the experience of being up close and personal with the crowd. I might be making a little less money than I usually would on a regular tour, but it’s very liberating.

I’m at a stage in my career where I need to be able to do whatever feels right to me. There was a time where I was just accepting kinda, whatever, because I was building. I wanted to have a career. Now I’m in a different kinda zone.

DM: Do people expect that now?
Ali: You know, Atmosphere and TechN9ne really made the foundation for how this is done, how independent hip hop touring and business in general is done. Anyone using that model really owes them a whole lot. And starting independently is the standard now. Kendrick started independent, Wiz Khalifa, Macklemore.

DM: This is a bit of a jump in topic, but I’m wondering, did you get out to Ferguson at all?
Ali: I wasn’t able to. My wife and I both spent the summer studying Islam very seriously. I was in the Bay for June and July and my wife was in Turkey for August. She came back right before this tour started. So I had both of my kids, and you know, I’m not able to drive because of my eyes. (Author’s note: Ali is legally blind as a result of his Albinism.) I just took the time to be with my kids. I left for one day, because Minister Farrakhan invited me to a meeting. So that was the closest I got — a lot of that meeting was directly related to Ferguson. Talib Kweli went down, and he and I were both at this meeting with Farrakhan the day before. Kweli went down there and I went back to the kids.

DM: In other current affairs, we have a new Bogeyman in the Middle East. Is the Islamic State a threat or a distraction? Is this something the west should be concerned and involved in, or is it something we don’t understand, to be left to deal with by those who do?
Ali: There’s almost two minds about it. First of all, that group and what they’re doing is more problematic for the Muslim world than it is for the west. Movements like that are very troubling because what they are doing is not Islam, and the agenda that they are pushing is not Islam. Tactics that they are using are condemned by Islam itself. Muslims don’t necessarily have to condemn them, although they mostly do. But Islam itself condemns what they’re doing (and so have most of the world’s) Islamic scholars and leaders. A lot have called ISIS a deviant sect.

As a Muslim it’s very troubling to see it taking so much precedence and being so prevalent. Also, young people are frustrated but don’t really know what this tradition is about. They’re just frustrated. The west has committed horrible aggressions on Muslims and the Middle East. So (young people) are responding to pain and despair, and a fear of hopelessness, the same way that after 9/11 a bunch of Americans went and joined the army. They don’t really know what’s going on — they just feel that they want to do something. So those guys that go sign up, it’s like, I understand this feeling. And unfortunately, our country isn’t sophisticated enough, and our news people don’t inform us enough, and so we really just don’t know what’s going on and respond in kind.

So ISIS is a problem to the west but as I said, it’s more of a problem to Muslims than anybody else. But the west is obviously using it to their advantage. The way they constantly run it on the news, the things they choose to focus on (are damaging).

DM: So what’s next after this tour?
Ali: In the last year, in the midst of all this studying, I started writing a book. I haven’t started a new album yet. So the idea is to finish this tour and go home and write the book. (But I can’t really tell you about it) just ‘cuz it’s not done. ■