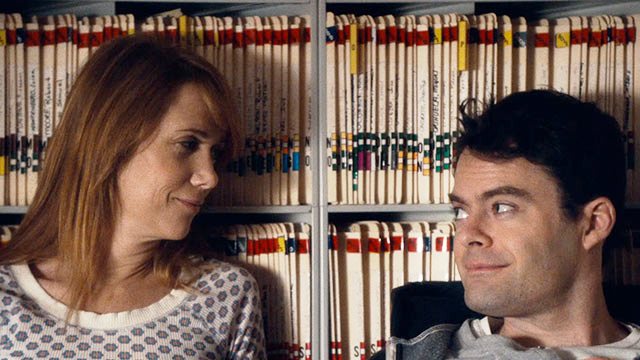 What if losers stay losers? In The Skeleton Twins, an estranged brother and sister find themselves nearing 30 and depressed. They were promised they would outgrow their outsider status after high school but, emotionally isolated from each other and their annoyingly well-adjusted peers, they now contemplate slitting their wrists and swallowing a bottle of pills on opposite sides of the country.

Milo (Bill Hader), unable to hold down an acting agent or a boyfriend, luckily also fails to take his life. His botched suicide lands him an invitation to recuperate at his twin sister Maggie’s (Kristen Wiig) place, which she shares with her happy-go-lucky husband Lance (Luke Wilson). The siblings, reuniting in their hometown after a decade apart, will confront not only suicide but an extramarital affair, a surprise visit from their New Age-y mother (Joanna Gleason), trickery involving birth control and… statutory rape.

In other hands, this plot would have surely collapsed into tasteless melodrama or obnoxious comedy. But thanks to the Sundance Award-winning script by Mark Heyman (Black Swan) and Craig Johnson (True Adolescents), these hijinks somehow seem normal, bordering on inevitable. The Skeleton Twins is in fact a quiet film. It moves slowly and smoothly. This is a commendable feat, seeing as it’s a movie that has Wiig and Hader lip syncing to Starship, giggling over fart noises and dressing in drag. But it manages to be one of the most restrained films I’ve seen this year, one that will especially ring true for anyone who has spent time in small-town America. You will recognize the pleasures and restrictions that are the butt of many of the film’s jokes.

It is not surprising, of course, that a movie starring Wiig and Hader is funny. The two are best known as Saturday Night Live veterans. SNL isn’t known for subtlety, but it does demand versatility. As longtime friends and professional improvisers, Wiig and Hader’s ability to communicate through silent gestures translates beautifully into the unspoken language between siblings. Wiig and especially Hader’s transition from comedian to lead is promising.

In fact, Johnson has assembled a whole cast around Wiig and Hader of comics repurposed as dramatic actors (Ty Burrell, aka Phil Dunphy on Modern Family, rounds out the main players), and there very little that’s more depressing, funny and believable than a sad clown. And Johnson has smartly played each actor against type. Burrell is the sympathetic predator, Wilson the man’s man, Wiig the desperate housewife and Hader the cynical gay actor, worlds away from his popular SNL character Stefon. Perhaps due to their inability to slip effortlessly into their roles — not to mention the clearly underused talents common to these actors—each is forced to develop a singular and nuanced persona. It’s these thoughtful and understated performances that elevate The Skeleton Twins from slapstick to dark dramedy.

Audiences will appreciate the parallel between the actors and their parts — each is pushed out of their comfort zone, reaching for a role they haven’t quite inhabited before. In the end, they’re buoyed towards reinvention by their sense of humour, their ability to laugh at each other and themselves. They’re proud to be losers. ■

The Skeleton Twins is in theatres now