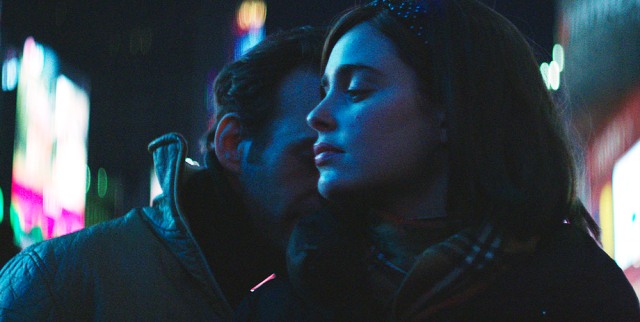 Felix and Meira, winner of the best Canadian feature award

Part of the appeal of TIFF for some people is that it gives a decent idea of what winter releases will be strong contenders for the Oscar race. TIFF doesn’t have a traditional jury and only hands out specific awards through secondary organizations. Best Canadian feature, for example, was awarded to Maxim Giroux’s Felix and Meira, which will screen as part of Festival du Nouveau Cinéma in Montreal next month. But the big prize at TIFF is the People’s Choice award, voted upon by ticket buyers and generally given to fairly standard, audience-pleasing films (12 Years a Slave, Silver Linings Playbook, The King’s Speech and Precious have all won it in previous years).

Although most critics (myself included) had trouble singling out a film during the course of the festival, the award went to the very predictable choice of The Imitation Game, the Benedict Cumberbatch-starring biopic of mathematical genius Alan Turing. I haven’t seen the film myself, but the elements (Turing’s cracking of the Nazi code led to the end of WWII, but he committed suicide a few years later, after being prosecuted for his homosexuality) certainly point to The Imitation Game being a serious contender for end-of-the-year awards.

As far as I’m concerned, the best thing I saw at TIFF was The Duke of Burgundy, Peter Strickland’s uncategorizable softcore S&M comedy / fever dream. It’s not likely to win any Oscars but it was the only film I saw in the last 10 days that truly blindsided me with its quality. It has a lot to do with my own availability, choice of screenings and relative greenness on the festival circuit (the idea that some critics lined up six films every day makes me simultaneously envious and a little nauseous) but I saw very few truly remarkable films this season and a lot of solid ones. On the other hand, I saw very few bad films, though I have to say that I took toxic buzz into consideration more than I usually do the rest of the year.

Also worth considering is that my opinions of films shifted and settled over time. When you see four movies in one day, you have little time to let them sit and form your opinion of them fully. I quite liked Elephant Song when I saw it as it proved to be a nice respite from two bloody, not particularly good films, but it hasn’t stayed with me much beyond Xavier Dolan’s performance. On the flipside, I quite disliked the French film Bird People (my very first screening of the festival) upon my initial viewing but I’ve thought about it often since then. I’m not sure it entirely worked for me, but I think there was more to it than I originally surmised.

As far as I’m concerned, there was no more assured success at this year’s TIFF than this documentary about legendary shlockmeisters Golan and Globus and the havoc they wreaked on the cinematic landscape in the late ’70s and ’80s. Mark Hartley has proved himself to be a fantastic chronicler of B-grade insanity with his films Not Quite Hollywood (about Australian exploitation films) and Machete Maidens Unleashed (about Filipino exploitation films), zipping around masses of cinematic insanity with a kinetic charge not often seen in this type of documentary. This time around, Hartley has the advantage of chronicling the lives of two outsized personalities in Menahem Golan and Yoram Globus (though they declined to participate — instead, they funded their own documentary about themselves): Golan in particular is an incredibly vivid subject, a slightly psychotic Israeli movie lover whose passion translates into terrible Chuck Norris and Charles Bronson movies while sometimes indulging auteurs like John Cassavetes. Any film about Golan is bound to be a blast in spite of itself, but the film is very much in line with Hartley’s tradition of dynamic editing and an endless bounty of film clips and interviews that inevitably add 30+ movies to your must-see list, even if one of them stars Dom DeLuise and a talking monkey.

Teenagers-on-the-lam movies have fallen out of vogue since the ’90s (certainly the Golden Age of teen stars riding in convertibles while wearing Ray-Bans), but you wouldn’t know it from J.P. Valkeapää’s They Have Escaped, a familiar though well-made trip through well-trod landscapes. Joni (Teppo Manner) has fled his military service and is forced to work in a home for troubled teenagers, where he meets Raisa (Roosa Söderholm), a snotty punk rocker who basically forces him into a romantic relationship that sees them run away from the constricting shackles of society. Valkeapää has a very muted, naturalistic style that bodes well for the film, but the first hour is so banal and so filled with familiar elements (the score even hints at the one from Badlands, the Rosetta stone of young-people-on-the-lam movies) that it pretty much sinks the film. Things pick up towards the end, but by that time it’s far too late. ■

See all of our TIFF 2014 reports here