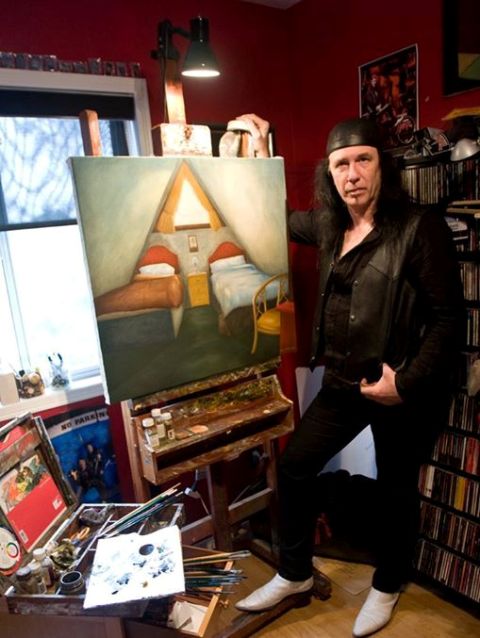 Hoser-metal heads, take heed! Canadian metal icons Anvil, who fell on harder times after the ’80s, reared their heavy heads to impress all over again in 2008 doc Anvil! The Story of Anvil . The band, which originally formed in Toronto back in 1978, has since enjoyed a career renaissance that has brought them back to the road and finally given them the credit they deserve for inspiring Metallica, G’n’R (the good version) and countless others.

The film also exposed a side unseen of original-and-still-thumpin’ Anvil drummer, Robb Reiner. He’s not only extremely adept with the sticks, he’s no slouch on the brushes, either – paint brushes, that is, the kind used to create paintings.

Yes, Reiner is a canvas artist. He brings his first-ever gallery show to St-Henri’s BBAM! Gallery (owned and curated by his one-time PR rep from Attic Records and a local curiosity in his own right, Ralph Alfonso). Silent Metal sees over a dozen works from the stick-and-brush man on display through Oct. 6.

And to kick things off, tonight, Reiner will be there in person. And, I’m told, so might a film crew working on a sequel to the wildly popular Anvil documentary. Paintings are not for sale, but you might find a souvenir or two available.

You can have a sneak peek on Reiner’s brand new website, but here’s a glimpse at the other side of the “Metal on Metal” drummer’s work, from his own perspective, during a phone call two weeks back.

Darcy MacDonald: So is this really your first time doing an art show?
Robb Reiner: On a street-level, gallery-setting, yes, this is actually the first one ever. I’ve held off for years and years from doing all this stuff. I’ve had offers, but I’ve just never pursued it.

DM: Why is that?
RR: I just felt the timing wasn’t right, years ago. I have a lot more time now and the art has spread all around the world, so I have a fan following for the art. It’s more established now.

DM: How did you get people to pay attention to your art?
RR: That was very simple (chuckles). You ever seen the movie about Anvil? Prior to making the movie, the director convinced me to show the other side of myself, which is that I’m an artist. I play drums, but I also paint. And I was reluctant because it was always a very private thing for me. It was always my thing. Not that I wanna make a big thing out of it, but it was always like, whatever man, I paint for myself. It’s only for me, and I don’t wanna sell them – it’s that kinda thing, right?

He broke me right down, like, “Man, you gotta show this side of yourself, this is incredible work! People will see that you’re a heavy metal drummer playing loud music, but your paintings are so lonely, and quiet, and desolate!” Total opposites, right? So I said okay, cool.

So that’s how the whole world found out that I’m a painter. It’s exposed in the movie very carefully, and tastefully. And ever since…that movie has never stopped, so it opened the floodgates this aspect of “Robb Reiner, artist.” (laughs)

DM: How did the demand grow after the movie?
RR: I got like fuckin’ thousands of emails comin’ in, at one point, like 20, 30 per day. “I love your work, where can I buy them, do you sell them, do you sell prints, do you have merchandise?” Like organically. I was going like, “Holy Christ! Like, fuck – like, wow!” I didn’t see it coming at all.

DM: How did you start painting?
RR: I started drawing and painting at eight years old. I still have my first drawing I did to this day. But I really got serious with it in mid-20s on. Like, “This is cool, this is relaxing, this gets me away from my everyday bullshit.” So I got into it heavy-duty and have been at it ever since.

When I’m not on tour, I paint. On the road I compile potential material to paint later. I love old buildings and fucked up, wrecked up buildings, and all those kinds of things. Where I see something that has potential to become maybe a Robb-o composition, then I’ll take pictures of it, then make drawings out of it, and eventually make a painting of it.

So I use the world stage to gather inspiration for my material, and actually most of my work…like, there’s a reason. I’m connected to every image. I was either there, or smoking some joints there. I’m connected to it in some way. I’ve made paintings of venues. So it’s all to do with my journey through life. ■