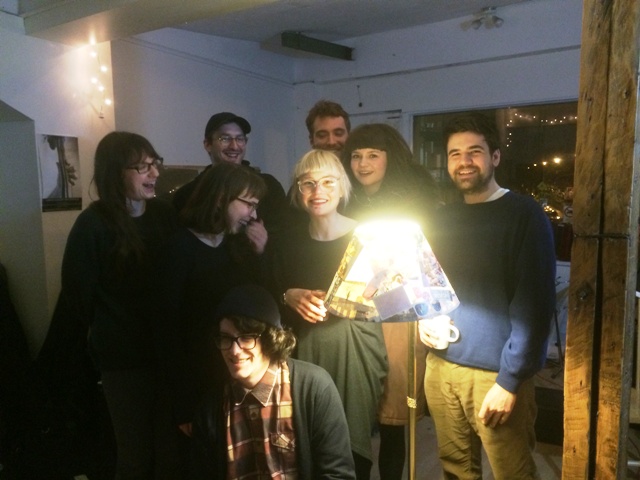 You may ask yourself, why a cassette label in 2014? Montreal has hosted many music scenes over the years. Formats have come and gone, but one thing always persists: passion and perseverance.

Founded in late 2013, Misery Loves Company was born out of casual conversations between members of different bands. “I don’t know how the stars align but this group of people who all had a lot of drive and energy all came together,” says Lungbutter/Harsh Reality drummer Joni Sadler.

“A lot of like-minded people started playing music around the same time,” adds Alex Pelchat, guitarist for experimental duo Drøm Før Du Dør & Shining Wizard, “all interested in having unique, diverse projects inspired by either nothing or enough things that they don’t sound like something you’ve heard before.”

Misery Loves Company characterizes itself by putting out cassettes that feature two bands per release, one per side. “It can be a way of introducing people who enjoy a band to something that they would maybe not seek out otherwise,” says guitarist/bassist Kaity Zozula (At Peace/Lungbutter/Harsh Reality/Mands).

The label operates as a collective community. Its mission is to showcase music that is both diverse and adventurous regardless of genres. Many of its members are also involved in projects such as Loose Fit, Mardi Spaghetti and Noïsundaéè that keep the city’s vibrant underground alight.

The first four releases were simultaneously launched this past spring. “It may have seemed a little crazy to release four cassettes at once and have all eight bands play a show together but we thought: well why not?” explains Amy Macdonald, vocalist/guitarist for Nennen & post hardcore noise trio Mands. “We want to help spread music that’s being made around us on physical copies so why not do it all at once.”

All members share the day-to-day responsibilities of running a label. The resources for making and distributing music have never been more accessible, or as James Goddard bluntly puts it: “We don’t need $100-million dollars and Steve Albini to put out some records. We got Tim Keen and a couple hundred dollars.”

Multi-instrumentalist Tim Keen (Ought, Silk Statue and Mands) serves as Misery Loves Company’s chief-in house recording engineer. “He has a very subtle and unobtrusive way of recording. Having been in a couple of bands that recorded with him, it always felt like a practice,” Sadler explains. “He genuinely cares about making sure things sound the way the band wants them to sound and not the way he wants, which is a pretty amazing quality in a sound engineer,” adds Zozula.

The second run of releases is due on Sept. 6. Misery Loves Company’s story is just beginning. “It’s a little bit hard to say how things are going to progress from here,” says Sadler. “But I can foresee us wanting to keep doing this because every time I turn around, there’s another new great band that appears and we want to help get that out there as much as we can.” ■