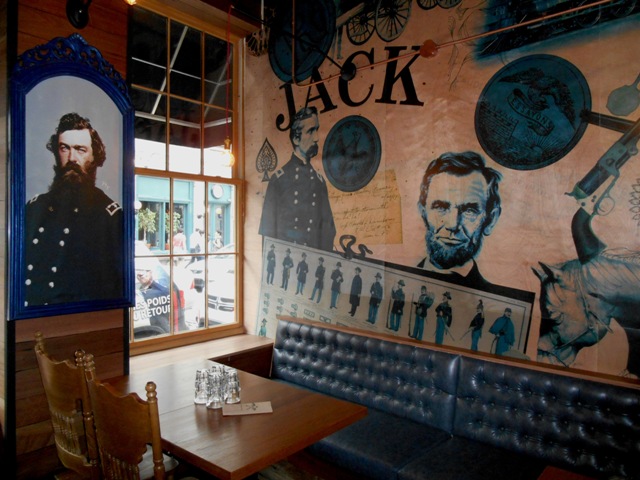 It’s hard to walk through Old Montreal and not notice the ever-changing landscape of restaurants and bars. Amid the longstanding institutions, newcomers open and close in the blink of an eye, so when I heard about the quirky concept behind its newest tenant, Jack Saloon, I just had to check it out for myself to see if this one has staying power.

The first thing that struck me was how massive this two-floor restaurant/bar/venue is. The main level is all leather booths, wood-panelled walls, an American flag backsplash behind the bar and an undeniably eye-catching portrait of Abe Lincoln hanging over the DJ booth. It’s also where you’ll find the kitchen, and if you’re seated on one of the stools right next to the service counter, you’ll be treated to a glimpse of the chefs at work — who could fault that? — as they deliver staples like ribs, onion rings, chicken wings and tartars, by chef Dave Struggle Boudreau.

Although the perfectly charred ribs fell off the bone before they even reached my mouth, they could have used way more seasoning. But the chicken wings –OMG! A love poem should be written for them, with a verse about the beer-battered onion rings, too.

Follow the red neon Bordel sign downstairs and you’ll find a performance space, black and red couches, skull-shaped lamps and rock walls. The bold décor was created by Sébastien Ménard, Thierry Rickman and Ian Sévigny, owners and designers at Surface Jalouse (their shop in St-Henri is worth a visit), and they’ve likely played a major role in the success of the original Jack Saloon in Quebec City and its sister restaurant in Brossard’s DIX30.

Opening night featured live performances by Lulu Hughes, Sébastien Plante, Papillon and the always fabulous DJ Plastik Patrik, who took the small stage by storm. The downside? If you do come here for a show and squeeze your way up to the front of the stage, you’ll be in for a great (intimate) treat, but if you get stuck by one of the side bars due to crowds, you won’t see much and will be shit out of luck.

Jack Saloon’s motto, which hangs in neon lettering above the downstairs bar, is “Sex, Jack and Rock ‘n’ Roll” — I get it, given the theme, but there’s something missing to really drive that sentiment home. Clearly, A LOT of time and effort went into each and every little detail, which is great in a way, but it compromises the grit and sleaze we’d normally associate with saloons. But hey, if you’re not bothered about authenticity and show up with a group looking for good times, you can probably get the job done at Jack Saloon. ■