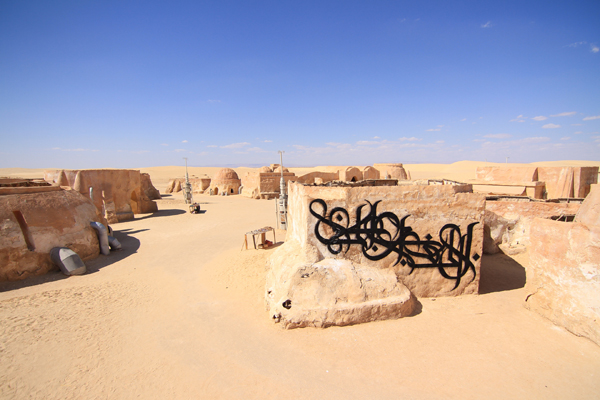 “I will never be your son” by eL Seed, from Lost Walls

This Saturday, Montrealers will get a special chance to view a collection of artworks by 10 Arab artists living and working across the Middle East and North Africa, in a group show called Ink Tank: Prints From the Arab World curated by Sundus Abdul Hadi of multimedia artist collective the Medium.

The works, ranging from photography to documented graffiti to subversive digital collage and cartoons, deal with themes of identity and representation among people living through instability and uncertainty.

I sat down with Abdul Hadi earlier this week to find out more about this one-day-only exhibition. Over espresso, she tells me, “The overarching theme of the exhibition is identity. During these times of political turmoil and revolution, the aftermath of the revolution, the civil war and the negative political reign that’s happening in the region, it’s even more important for us as artists to think about who we really are, of how to define ourselves as Arabs during these times. Should we even define ourselves? CAN we define ourselves? It’s about putting these questions out there, how to best represent our people and ourselves as Arabs.”

The group show was developed to complement the Montreal-based Arab Development Initiative’s Development Lounge event taking place Saturday, with a panel of guest speakers discussing the topic of development in the Arab world. The organizers wanted to include a visual arts component to the conference and turned to Abdul Hadi to make it happen. Though the Development Lounge is a ticketed event, Abdul Hadi made sure the exhibition would be free and open to the public, saying, “I’m a big believer that art should be for the people. We should be able to appreciate art for free anywhere.“

Many of the artists came to Abdul Hadi’s attention through the sprawling networks of cultural creators centred around the Medium, which Abdul Hadi cofounded in 2013 with her husband the Narcicyst. “In our respective fields, art and music, we’ve become introduced to a vast array of really dope artists who are doing, in my opinion, really groundbreaking work. Work that should be seen but is not often in the mainstream,” she says.

These artists include eL Seed, a French-Tunisian graffiti artist specializing in wild-style Arabic calligraphy whose project Lost Walls saw the artist create works across Tunisia last summer in a month-long journey of discovery and celebration of the history and beauty of the country’s people and culture.

Another is Tamara Abdul Hadi (sister of Sundus), whose photo-documentary series depicts artwork created by Syrian children living in refugee camps in Lebanon. Abdul Hadi explains that the artist has created “portraits of young students, eight, nine, ten years old, holding their artwork up to their face. They had made the artworks as part of their curriculum at the refugee camp schools about their home. The artworks are super powerful.

“My sister works a lot with the idea of representation and how to represent the region without exploiting the people, so they’re not pictures of refugees holding up their artwork — it’s about their artwork, their experience and about the message that these kids were trying to put out there about where they’re from.”

Also on display will be works by Syrian Eyes of the World, a project that focuses its lens on the diaspora of Syrians around the world, which Abdul Hadi describes as “a photo collective of Montreal-based Syrians taking photos of Syrians around the world. It’s a way of representing yourself as a people in your own eyes and putting that image out there in the public to change the perceptions that people have of these war-torn countries that you hear so much about in the media. We’re showing 10 different portraits from Montreal, Syria, New York — it’s a really diverse project.”

Diversity is a key concept when discussing Arab art, culture and identity, because as Abdul Hadi emphasizes, “You can’t really put a label on an Arab or define what Arab art is today. The work that we’re showing is so different from each other. You have different reactions to what’s going on from different artists who all use their medium of art to reflect on their stories and the stories of their countries.”

Abdul Hadi hopes that visitors to the exhibition will enjoy discovering the work of these diverse artists and even that of their extended networks and influences through the artists’ social media presences.

“We’re lucky in this time and place to be so connected,” she says. “It’s all there. It’s just a matter of tapping in.” ■