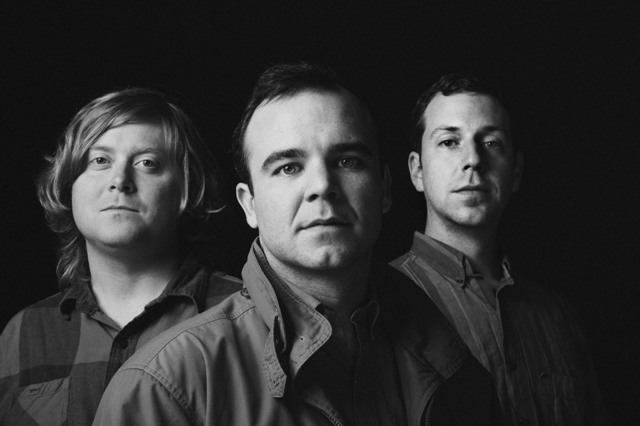 Sam Herring sat on the stoop of a North Carolina cottage, watching the sun set over vast fields that once teemed with cotton and tobacco. It was a seemingly serene vista, but it did little to settle his nerves.

“I’m the first member of my family to not work in the tobacco fields,” the Future Islands frontman says during our recent phone interview, while recalling that North Carolina sunset. He and his bandmates (guitarist/bassist William Cashion and keyboardist Gerrit Welmers) wrote their breakthrough album, Singles, at that cabin last year near their hometown in Greenville. It was meant to be a quiet reprieve from the raucous Baltimore indie scene that they now call home. But initially, the rustic locale didn’t help Herring relax or focus on penning new tunes. Instead, it stirred up old, unresolved quandaries.

“A lot of my lyrics are strongly informed by our North Carolina background,” Herring says, before conceding that such rural Southern roots may not be initially evident on Future Islands’ new wave-y, synth pop anthems. During the writing session at that cabin, Herring found himself dwelling on the familiar setting, and all that he and his bandmates had left behind. “As a Southerner, a liberal Southerner, I look at a cotton field and it’s beautiful to me. It’s like southern snow. We don’t get winter, but you get that white cotton blossoming in the fall. Then you think about the bloody slave history that took place on those crops, and you shudder. The old tobacco fields have  a similar dichotomy— they’re nothing but black, dead earth now, but my grandfather once lived off them. Now I’m paying $10 in tax to smoke cigarettes, and I’ll think about how my grandfather could smoke for free.

His nostalgic tangents may seem strange, and they were certainly distracting as the band holed up in that North Carolina cabin. But Herring continued to follow that line of thinking, until he eventually came upon one of Future Islands’ most original song ideas. On “A Song for Our Grandfathers,” the frontman croons about the formerly rich soil where his elders sewed their legacy, as Welmers’ scatters synth riffs like seeds that are all too eager to bloom.

The tune’s refrain of “grandmama watchin’ over me,” may seem a bit trite out of context. But Herring’s impassioned delivery makes each couplet sound like a magnum opus. Several music critics have highlighted that jarring disconnect, including a reviewer for Pitchfork, who wrote: “His words are the sort of thing that would tumble out of your mouth if you were told to write a love poem right now in eight seconds… (they) look goopy on the page, but sound so impulsively romantic when he sings them.”

Herring feels those critiques are more than a little short sighted. In fact, he says his simplistic lyrics are anything but missteps.

“I could be deeply cryptic and abstract, and fold the message inside a million rose pedals until I sound like a genius. I actually did that for years through hip hop and my early writing,” Herring says of his forays into MC’ing and battle rapping when he first arrived in Baltimore more than a decade ago. But he adds that such elaborate lyricism would never suit Cashion and Welmers’ swooning instrumentation. “I thought about it and realized that this is pop music. What does it do for anyone listening if I’m hiding these secrets? Some people say my lyrics are simple, but it’s almost harder to say something simply, and say it with conviction.”

“I’m trying to say what I mean,” he adds, before elaborating: “When you’re saying what you mean, when you’re having a conversation with your best friend at four in the morning over the last beer in the refrigerator, you’re not trying to be eloquent. You’re getting to points. You’re finding the deeper meanings in simple statements.”

Herring exudes equal stubbornness in his onstage delivery. And while his lyrics may be straightforward, his dance moves are anything but. While performing songs from Singles and Future Islands’ earlier albums, the frontman seems intent on bringing the conviction in his voice to life — bobbing and weaving like a heavy weight contender as the songs’ tempos pick up; pounding his chest while belting out the choruses; reaching with an outstretched palm as his voice hits climactic high notes. His theatrical style may be jarring at first, but it’s part of what helped the band break though during an especially assured performance on the Late Show With David Letterman this past winter. The melodies were indeed catchy, but Herring’s uniquely kinetic energy turned the segment into a viral Youtube hit.

“We were excited that it had such a wildfire effect, but at the same time we kind of shrugged and thought ‘We’ve been doing it this way for 11 years now,” Herring says with a laugh of the frantic response to his quirky dancing. He says those moves are not precisely choreographed, but they are becoming more and more carefully planned. And that forethought isn’t the only hallmark of their onstage evolution, according to Herring: “If we’d done Letterman in 2007, I would’ve been decked out in neon pink pants and a bright yellow shirt, with geometric shaped side burns carved into my face. We’re more mature now.”

Fans and critics may call it an innovative approach. But Herring says it is actually quite old fashioned, before citing James Brown, Elvis and Elton John as his onstage influences.

“A lot of people don’t perform in that way anymore,” Herring says, in reference to the legions of aloof rockers touring today. He is more than aware of that trend toward restraint, but adds that he never felt pressured to conform to it: “I’m informed by musicians who sweated really hard onstage, because that’s what you had to do to make a buck, to get by.”

And while their frontman flails and swaggers, as if possessed by the spirits of a thousand vintage showmen,  Welmers and Cashion find themselves following suit, albeit in a far more subdued fashion.

“Live, I definitely play off of what Sam is doing,” Cashion tells CultMTL, adding: “I’ll beat the shit out of my bass when he’s screaming his ass off, and I try to mimic the harsh loud/quiet dynamic of his vocals.”

Herring thinks that his elaborate physicality compliments his straightforward lyrics, instead of clashing with them. Those approaches may seem polarized, but they’re actually rooted in the same line of thinking.

“When you’re performing in a noisy bar, people won’t hear all of what you’re saying,” Herring says of the umpteenth reason why he avoids complex lyrics on Future Islands’ songs, adding that those raucous venues also call for his most frantic physical tricks: “If you put a lot of thought into your words, then realize people won’t even hear them, that’s when you realize that the story has to be told with your body, through pantomime and pulling and pushing.”

Much of Future Islands’ success lies in Herring’s coordination of those opposites — a rural upbringing vs. a career built on synthesizers and viral videos; pure white cotton fields that were once stained in blood; complex dancing mixed with simple lyrics; and a stage presence that can seem boldly self assured in one moment, then fraught with horror in the next.

“The point is to be vulnerable,” he says of the balancing act that is a Future Islands’ performance. “You can cry in front of people, your body poised with strength and a broken look on your face. And that is what gets people. You have to open yourself up and still be strong, showing the strength and weakness, the fragility along with the power — because that’s who we are as people.”  ■