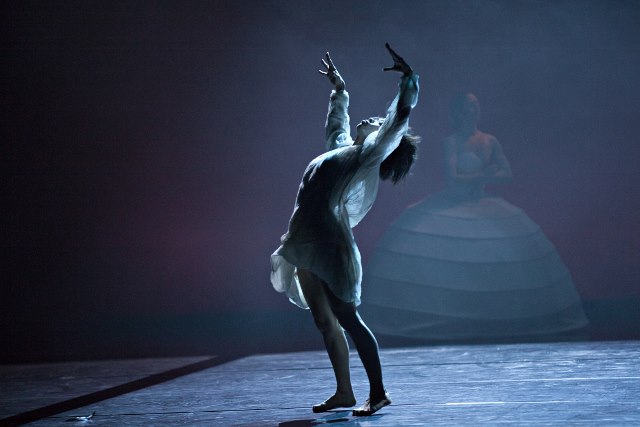 Akram Khan’s iTMOi (in the mind of igor)

You know it’s fall when the neighbourhood Quartiers Danses festival hits the streets. Now in its 12th year, the fest is in full swing, shaking things up all around town, somewhere near you. Make sure and check out the free outdoor program in hoods across the city for creations by Parts+Labour Danse at Mount Royal’s lookout, or keep your eyes peeled for three couples entangled in Mania at the Place des Arts Esplanade for a choreographic exploration about insanity by New Yorker Maya Orchin.

The closing show, Empty moves (parts I, II &III), unites a trio of works that were created over a decade by choreographer Angelin Preljocaj. The quartet is a response to Empty Words, an abstract soundtrack by American composer John Cage, recorded in 1977. Also, for some dance in 2D, stop in at your Maison de la culture for films that feature the works and thoughts of the prolific French artistic director of the Ballet Preljocaj. (Sept 15-20)

Hello Germanophiles. If you’re also fans of dancer-choreographer Louise Lecavalier, head over to the Goethe Institut. Created by Fabien Prioville, Reverse_Me is an installation piece created during a six-week residency that transforms the entire space into a creative jungle gym by mixing video, dance and performance. (Sept. 18-21)

Over at Tangente, a double program with a quartet inspired by the Theatre of the Absurd by David Albert-Toth and Emily Gualtieri, whose In Mixed Company explores the ideas of relationships and societal norms. Then Emily Honegger and Geneviève Gagné in their Densité d’un Moment slow things down and speed things up by taking apart a moment between six dancers and looking at it from all sides. (Sept. 18-21)

It’s been a while since we’ve seen O Vertigo, but now they’re back on home turf celebrating their 30th anniversary.  Originally trained as a gymnast, choreographer Ginette Laurin uses the momentum of a gesture in a highly physical group piece as a starting point. For her newest creation, Soif, Laurin gave each dancer 30 everyday movements as a repertoire of gestures and instructed them to dissect their impulses and endings.  (Oct. 2-4)

At the MAI, there’s more work by female choreographers. Daina Ashbee tackles the murky themes of identity and addiction amongst Canadian Aboriginal women (Oct. 3 and 4). Over at Agora de la Danse, Deborah Dunn delves into banal home life as inspiration for Le délire domestique. Her seven dancers, including Dunn herself, transform the tedium of cleaning and cooking into something quirky and surreal. (Oct. 22-24)

Speaking of transformation, as part of the Festival Phénomena, at l’Espace Go, the captivating Andréane Leclerc takes the art of contortion to a new level in her intimate choreography Cherepaka, which is based on the death of a turtle. In this solo, Leclerc explores the contrasting nature of this reptile’s durable shell, and its mortal body. (Oct. 21-24)

Then here’s an interesting mix: Bach and Breakdance. The Berlin-based troupe Flying Steps are joined on stage by Christoph Hagel, solo pianist and harpsichordist who performs Bach’s The Well-Tempered Clavier. While the popping, locking and acrobatics are going on, electro beats by Ketan and Vivian Bhatti are woven throughout this classical musical performance. (Oct. 23-26, Théâtre Maisonneuve)

Then, to close the month, London-based choreographer Akram Khan brings his iTMOi (in the mind of igor), which celebrates the life of Igor Stravinski.  Life, rupture and death are some of the themes Khan investigates with his new work for 11 dancers, commemorating the centennial anniversary of the creation of the Russian composer’s iconic The Rite of Spring. (Oct. 30-Nov. 1, Théâtre Maisonneuve) ■