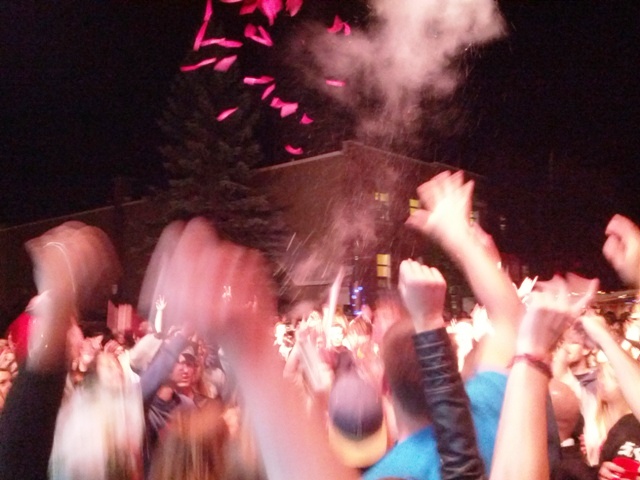 The crowd around Rich Aucoin

Rouyn-Noranda’s annual FME is unlike any music festival in Montreal, and there aren’t other events of its kind in the rest of Quebec. It’s not designed to draw in heaps of tourists, it’s not an industry gathering where bands are essentially auditioning for contracts and bookings, and it’s not a contest.

You could call it a micro-POP Montreal, because it hits a lot of similar notes: many genres are represented (heavy rock, singer-songwriter, hip hop, art pop etc), there’s always a messy late-night dance party and there are plenty of Montreal bands playing at venues across the small pair of twin towns, with an international component, too (at FME it tends to be French).

Linguistically, French acts are dominant — it’s a Quebec town, after all, and local/regional audiences make up the majority of the crowds — but only slightly. Media outlets from Montreal, ROC, the U.S. and even overseas are flown in to discover and report on (mostly) Québécois acts seeking the spotlight.

This year’s festival kicked off with an outdoor show headlined by one of Canada’s finest showmen: Rich Aucoin! The Halifax entertainer had played an amazing late-night show at FME 2013, introducing the town and festival-going visitors to his signature synced audio-visual experience (combining music, video, confetti cannons and lots of fun crowd-participation antics), and this year he made full use of the larger outdoor stage to reel in a stack of new fans. For the initiated, who’d seen similar permutations of the show over the past few years, there were a couple of new songs and videos, from Aucoin’s long-awaited forthcoming album Ephemeral. Partying under a parachute with Aucoin and the rest of the crowd was a pretty great way to start the festival.

Luckily we were also able to catch slices of the show at the old church across the street from the outdoor stage, Agora des Arts. Philippe B and Jimmy Hunt brought some classic Québécois vibes to the space, pairing singer-songwriter depth and sonic grace with moments where their respective pop and rock foundations shone through.

Rounding out the night were Hugo Mudie’s raucous new jam Miracles (he previously led Montreal bands the Sainte Catherines and Yesterday’s Ring, then went on to start Pouzza Fest) and electro-rock four-piece Pif Paf Hangover, a real pleasure to move to.

Day 2 began with an obligatory stop at the town’s famed poutine joint Chez Morasse (always worth a stop), then to Cabaret de la Dernière Chance to catch the launch of the debut record by a band called Bernhari. Their open-heart vocals and cascading, reverberating riffs went over great live, and should translate across linguistic lines (they’re francophone).

Then it was back to Agora for Blood and Glass, a band fronted by Lisa Iwanicky Moore, who some Montrealers will remember from the band Creature. On stage at her side was Thus Owls singer Erika Andersen, boosting vocals that were already rich enough to evoke Kate Bush — though that connection had a lot to do with the band’s art rock machinations, melodic pop moments and theatrical flourishes.

It was hard to beat Blood and Glass’s impressive set, but there was a lot of excitement for the night’s headliner Fontarabie, featuring former Malajube singer Julien Mineau. Far from the raucous vibes of his old band, Mineau and his four-piece line-up slowly doled out the gorgeous, haunted, off-kilter sounds that have come to define this new project (as heard on his self-titled debut LP, released in the spring).

Seeing old-school Montreal punks the 222s (the night before their official farewell show in Montreal) and the searing rawk of Red Mass was a total turn-around from Fontarabie, but sometimes it’s nice to end the night with a bang.

Day 3 began with an afternoon set by Mozart’s Sister being moved from the outdoor stage to la Dernière Chance due to rain. After seeing her under similar circumstances last month at Osheaga (where she was a last-minute replacement rather than relocated, but also the first act of the day playing to a small sober crowd), I knew that Caila Thompson-Hannant and her on-stage companion would make the best of the situation. Their melodic and soulful electro-pop tunes won over the crowd and even made some of them move, not bad for 2 p.m. in a room full of (mostly) strangers.

Then the FME app announced a mysterious secret event in a mall parking lot, which turned out to be a video shoot for a song by young Montreal rockabilly duo les Deuxluxes. After a bit of standing around as directors and cameramen coordinated with the musicians, we were told to get circular and engage in a little call-and-response. Good times.

FME’s hip hop show went down on that rainy Saturday night, packing what felt like every teen (of legal age) and 20-something in town into the Paramount. If the venue’s name wasn’t enough of a giveaway, the height of the stage and stickiness of the floor made it clear that the room was once a movie theatre, and the excess of excited bodies inside really brought the steam (Rouyn doesn’t do much A/C). Body heat was high, as was enthusiasm for Eman (of Alaclair Ensemble) & Vlooper, who introed their relatively new collaborative project. Also on the Queb-rap tip, Dramatik (of Muzion) brought a little gravitas to the bill, but the kids really went crazy for the Posterz, anglo Montreal rappers who are too fresh to be big, but still carry an aura of buzz that could get them there.

After moving with that crowd for that long, drenched in sweat inside and then rain outside, making it to the 2 a.m. dance party with French electro royalty the Hacker was no longer a viable option. Too bad — I heard (from a source who experienced it from the far end of the sobriety spectrum) that it got messy-fun.

On the final day of FME, Montreal neo-folk four-piece Mentana was a highlight of the early programming, and post-punk revellers Ought closed the festival in fine form — though they started off a little trepidatious and had to win over a crowd that seemed unfamiliar with their material (this wasn’t Brasserie Beaubien or Casa, after all). But I can’t say enough great things about Owen Pallett, the solo artist and Arcade Fire violinist who played Agora around 9 p.m., sandwiched between Québécois folkies Laurence Hélie and Daniel Bélanger (a huge name in Quebec — the vast majority of the crowd came out for him).

Pallett’s booking at FME, the night after Arcade Fire’s huge Parc Jean-Drapeau gig in Montreal, fuelled rumours that had been building and circulating for weeks (months, even) that the whole band would secretly turn up in Rouyn, but Pallett emerged on stage alone, his drummer and guitarist/keyboardist joining him mid-set. It’s relatively easy to impress audiences with live looping, as common as the practice has become, but Pallet’s proficiency on the violin and the relative complexity of his song structures and arrangements, not to mention his lovely voice (which he doesn’t get enough props for), mesmerized a crowd that (mostly) had no clue who he was. Having followed Pallett’s career and development since he won the first ever Polaris Prize (as Final Fantasy) back in 2006, I was right there with everyone else. Mesmerized. ■