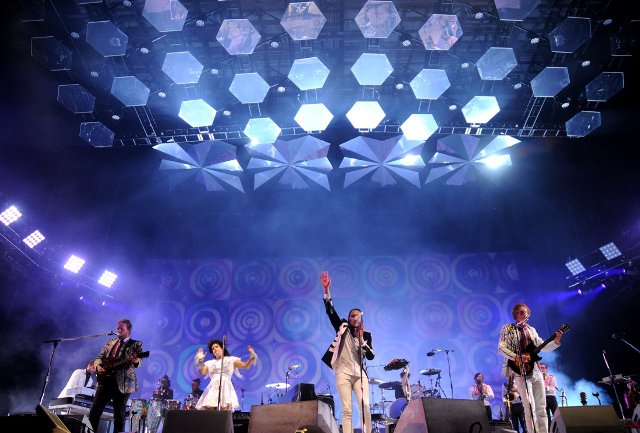 Nearly a year since a series of exclusive semi-secret shows at Peel Street’s Club Salsathèque christened the ubiquitous hype machine that was the age of Reflektor, Arcade Fire concluded an extensive world tour with fireworks in their hometown with a gig at Parc Jean-Drapeau.

For those who watched the band hit every corner of North America this year, playing sloppy localized covers each step of the way, waiting for them to hit Montreal was agonizing. For the select few who did manage to see them perform a live dress rehearsal in the cramped salsa club, it was an opportunity to see Reflektor as it was intended — a big, boisterous and sleek arena/stadium/field show.

In terms of visuals and supporting players, this was the most ambitious show the band has ever delivered. The set was a little light on The Suburbs and Neon Bible, instead going big with the danceable new one and Funeral. They even dropped show-stoppers “Power Out” and “Rebellion” very early in the night.

The backing band was stacked. Fellow Polaris Prize winner Owen Pallett has been supporting them the whole tour, but it was a surprise to see sax men to the stars Colin Stetson and Antibalas’s Stuart Bogie in the horn section.

Throughout the tour, the band has played a different cover every night, specifically choosing songs by bands from the city they would be playing in at the time. In our case, “Safety Dance” or “Sunglasses at Night” would have been good for levity. They had a couple of false starts, blasting the recorded version of Celine Dion’s “Une colombe,” with a woman wearing a television set-type contraption over her head serenading a Pope Francis bobblehead (mimicking the time Dion performed the song for Pope John Paul II). Win then gave credit to recently reunited local band Unicorns for giving them their start. But Arcade Fire didn’t play Unicorns either. They instead went for dearly departed luminaries Wolf Parade and their emotional crescendo, “I’ll Believe in Anything.”

It turned what had been an enjoyable but familiar Montreal Arcade Fire show — which means getting blotto with friends, shouting lyrics and reminiscing over Arcade Fire shows past (usually bragging about who saw them first) — into a unexpected walloping of mid-’00’s Montreal nostalgia.

Arcade Fire covering Wolf Parade could be considered the Montreal indie heyday equivalent of the Beatles covering the Stones. There was a point in time, likely somewhere after the release of Apologies to the Queen Mary and before Neon Bible, where it was perfectly reasonable for people to be evenly split over which group was better. The Krug-Boeckner dual-frontman combo had a chaotic magnetism that the Win and Régine show will never duplicate, nor ever strive to.

The intensity of the performance was shocking, as if Arcade Fire were trying to revive Wolf Parade on the spot, or educate younger fans who were clueless as to what was going on. They had countless options in terms of potential cover songs to play, and they picked the perfect one. Sure, they spoke in French and announced that a dollar from every ticket went to Haitian charity KANPE, but it was the cover that reaffirmed that Arcade Fire remains ours.

These warm feelings will resume in a few weeks when Unicorns take to the stage in Montreal for the first time in a decade. Where this Montreal music nostalgia trip will take us after that is anyone’s guess. ■