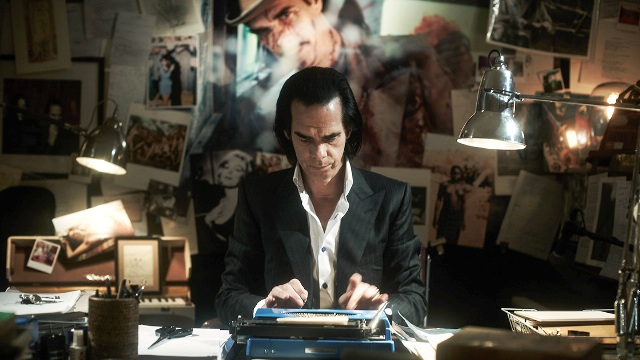 Iain Forsyth and Jane Pollard, filmmakers with a background in the conceptual art world, were hired to document a Nick Cave & the Bad Seeds recording session for promotional purposes. Inspired by what they shot, they expanded the project into this full-length feature. But 20,000 Days on Earth is miles away from your average rock doc. Anyone who knows anything about film is aware that almost all documentaries are staged or manipulated to some extent, but 20,000 Days throws the concepts of objectivity and vérité out the window, opting instead for an impressionistic portrait of Cave and his creative process.

Using a day in Cave’s life as a framework, the film shows him visiting a therapist (who comes across a bit like an interviewer — one of the film’s subtly clever points about the blurring of personal and professional, persona and truth, in Cave’s work and image), dropping in on his copious archives, collaborating with his band (notably longtime Bad Seed Warren Ellis) and driving around. Seemingly random friends and collaborators, from Kylie Minogue to actor Ray Winstone, turn up to philosophize, reminisce and shoot the shit with him.

Cave is one of those rare artists that’s more popular in his late career than ever before, and you can hardly say he hasn’t earned it. He looks as cool as ever, but time has started to catch up with him — his face becoming jowly, his dyed-black hair more ostentatious, his stage moves more laboured. The only time he remains silent in the film is when asked his age.

The filmmakers’ stubborn refusal to spell things out occasionally make it seem like the film is only for hardcore Cave aficionados, especially in moments such as when ex-Bad Seeds guitarist Blixa Bargeld turns up, uncredited, to talk about why he left the band. But I can vouch that it’s not for fans only, because I’m not really one myself. Cave’s schtick was always a little too goth for me, the dark notes laid on a little thick. However, you can’t help but respect the guy. Twenty years ago this summer, I saw him perform with the Bad Seeds in Montreal at Lollapalooza. Playing at 2 p.m., a pretty brutal slot for anyone but especially an artist as dark and intense as Cave, he overcame the odds with an absolutely killer performance.

And it’s when he’s shown playing that the film really lights up. There’s an electrifying concert scene towards the end, and earlier a recording session (presumably the one that ignited Forsyth and Pollard’s interest) in which we see the almost perfect synthesis of chaos and control, collaboration and singular vision, that makes the band’s music come alive.

You should see this film even if you’re not a Nick Cave fan. It might make you into a bit more of one, but even if not, you’ll appreciate the filmmakers’ creative approach that never once falls into the predictable. ■