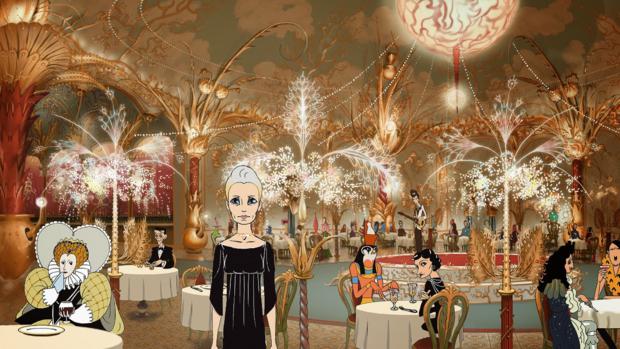 It’s a bit early to say how the whole cinematic slate of 2014 stacks up, but it has been a great year for highly original films, from Richard Linklater’s Boyhood to Jonathan Glazer’s Under the Skin (and locally, Denis Villeneuve’s Enemy and Denis Côté’s Que ta joie demeure). But The Congress, from Waltz With Bashir director Ari Folman, is in a category all by itself.

Robin Wright, riding her recent wave of success with an incredibly deep, complex and brave performance, plays herself, or a version of herself. As the film begins, a studio offers her the opportunity to have herself scanned and sampled — in effect, digitally cloned — so that her image can continue to act while she herself retires. Struggling with her fading career and supporting a son (Kody Smit-McPhee) with a rare medical condition, she agrees to this Faustian bargain.

Twenty years later, she comes out of retirement to attend the titular congress, an industry convention which takes place in an animated, surreal and perverse parallel universe. And then things start getting really weird.

It’s a movie that can really only be compared to other singularly original and strange works of cinematic art — David Lynch’s Mulholland Drive and Charlie Kaufman’s Synecdoche, New York are the only even vaguely comparable examples in recent times. Like those films, The Congress is at once a profound meditation on what cinema means and a demonstration of what it can do, while also a wildly free-wheeling story that’s unafraid to go to the craziest places. It’s a truly unique film and without a doubt one of 2014’s absolute must-sees.

I spoke to Folman, the director, who adapted the film from a novel that he loved as a young man, by cult sci-fi author Stanislaw Lem. I reached him at his home in Israel.

Malcolm Fraser: Were you conscious of creating something highly new and original, or did it just follow the material?

Ari Folman: I tried to do something I personally hadn’t done in the past, to challenge myself, not to get bored. I knew I wanted to combine live action and animation. I think this is my biggest mission.

MF: Why was it necessary for Robin Wright to play herself, or for a real-life actress to be playing herself?

AF: In a way, I’m bored of film genres. I never understand where documentary ends and fiction ends, where fiction ends and science fiction begins. It’s always a matter of the establishment you have — for instance, the documentary funding system. Why? Who decides? I was keen on the story of an aging actress and what that means; technology, and how it changes something we love, old-school cinema. I thought it would be best if I could find an actress to play herself, to make it more real and more believable.

MF: In the Congress sequence, at one point there’s a dream within a hallucination within a film. Were you ever concerned that people might lose track, or was it a goal for viewers to be destabilized?

AF: I think that to me, we live in parallel universes all the time — the one we’re living, and then what we imagine and our subconscious. And I think a good film is a combination of the two. It has a completely different time scale than we have in reality. The test is when you come into the cinema for two hours and you’re completely lost. It will happen in a very good David Lynch movie, and some of the great filmmakers of the past.

MF: That’s funny, because I was thinking that Mulholland Drive is one of the only films that could be compared to this one.

AF: Mulholland Drive is one of my favourite films. I’m not one of those who really understood it, and I’m not sure that Lynch really understood it, even though now you have this army of bloggers who supposedly explain everything in the film. But I think you just have to go along for the ride.

MF: When I told friends I was interviewing an Israeli filmmaker, they automatically assumed the film would be about the troubles in the region. Did you consciously want to move away from that subject after Waltz With Bashir?

AF: Yes, absolutely. I had a lo

ng year travelling with Waltz With Bashir after it was sold — talking about myself, talking about the region, the war, talking politics. I needed an escape route from Waltz With Bashir and from myself. The only thing I wanted was to run away. I thought this book that I read when I was really young would be the perfect escape. I didn’t want to be caged in the success of Bashir. I wanted to turn 180 degrees. I think it was successful, and I don’t want to go back.

MF: What has the reaction been like to the film so far?

AF: I think for some of the audience, the film is very challenging. You know, you really have to let it go when you go to The Congress. You have to fasten your seatbelt and trust the filmmaker. You end up in a different universe and you’re gonna have fun, and it may open your mind in different aspects. If you resist, it won’t work. But if you want something that is worth the price of the ticket, this is it! ■

The Congress is in theatres today