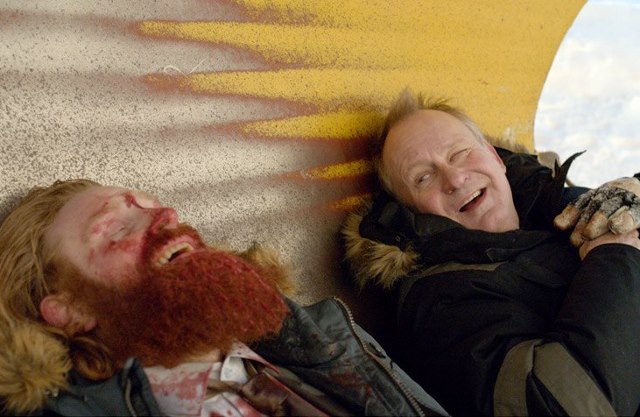 Kristofer Hivju and Stellan Skarsgård in In Order of Disappearance

The Fantasia International Film Festival came to a close on Thursday, after three weeks of cinematic intensity. With hundreds of films screening over a three-week period, it’s impossible for us to cover everything even when our critics attend a screening every day. We asked them to look back on the highlights of their Fantasia 2014 experience.

I always bite off more than I can chew at the beginning of Fantasia. The release of the schedule sends me into a fugue state that lasts about a week until I realize that I have other obligations to fulfil. I didn’t see everything that I wanted to see, but like a few of my fellow critics I was bowled over by the Norwegian black comedy In Order of Disappearance, a deadpan, Coen-esque take on the revenge genre. It’s sharp, violent, hilarious and surprisingly original for a genre that seemed completely tapped out 10 years ago.

Also incredible and seared into my brain is the gross-out coming-of-age film Wetlands, a kaleidoscopic array of bodily fluid jokes that remains the most uncomfortable I’ve seen a Fantasia crowd get. You haven’t lived until you’ve seen four guys jerk off onto a spinach pizza (in lovingly-detailed extreme close-up) with 400 other people. I was also thoroughly impressed / fascinated by the no-budget comedy I Am a Knife With Legs, an out-of-leftfield gem by the complete unknown Bennett Jones; in a just world, this gets attention from a Will Ferrell type and Jones takes over the damn world.

The worst movie I saw at the fest was also one of the most fun screenings; that distinction goes to the incredibly chintzy 1990 gonzo ‘documentary’ Montréal interdit which screened at the Cinémathèque. A cheap piece of exploitation that purports to document the seamy underbelly of Montreal, it’s 60 per cent made up of interminable striptease sequences and voodoo dancing in someone’s backyard. I wouldn’t exactly recommend that you track it down unless you’re very curious as to the identity of the aliens that live in Mont St-Hilaire (spoiler alert: they’re made of rubber) but it’s certainly something.

Oh Fantasia, how I missed thee: your interminable line-ups, your unexplainable pre-film meowing, your incomparable excitement, your contagious crowd participation, your bizarre love for a Korean soup commercial and, of course, your weird-ass films. Sometimes, your reaction to a film almost makes it better. Thus, our access to media screeners means that my experience of watching Mr. Go might have been enhanced if I’d been sitting next to you nerds, all riled up for a big fake monkey, instead of by myself in my house pants.

Thankfully, I did see a few other movies that I loved, and I think my list will show that I’m a much bigger fan of darkly comic films than I am of kooky comedies or horrific gore. Although I had to explain to my gentleman Brit/ Fantasia noob boyfriend why the nerd crowd was cheering every time someone died, I absolutely loved In Order of Disappearance by Norwegian director Hans Petter Moland. It was the perfect mix of revenge, brutal violence, intelligent sarcasm and Stellan Skarsgård. Also, it took me about 30 minutes of staring at Bruno Ganz as a Serbian gangster before whispering. “Is that Hitler?”

The One I Love is the most relatable and charming relationship film I’ve seen in a while — its slight sci-fi twist was an original bonus. For someone who absolutely hates Mad Men, it’s nice to see there’s life after the super annoying Peggy for Elisabeth Moss. Also, Mark Duplass, am I right ladies?

Finally, Metalhead and When Animals Dream were two intelligent and fascinating, albeit completely different films about young women “finding themselves:” one through metal music, and the other through, well, being a werewolf. I might be in the minority of Fantasia fans who doesn’t go mental for Asian cinema — maybe I prefer the weird shit that spawns from the dreary cold Scandinavian/ Icelandic landscape. See ya next year, nerds!

While we are split on our favourite films of the festival, we agree on the standouts. Mark’s top film is Boyhood because it shows how the passing of time can be the most astounding special effect there is — kudos to Richard Linklater. Katie’s is Bag Boy Lover Boy because Jon Wacther’s performance is one of the most memorable in recent years, and it makes Taxi Driver look like a Disney production with its necrophilia and cannibalism.

The best horror film of the fest was Black Mountain Side. Its tension and sense of isolation (it’s set in the Northern Taiga Cordillera) were unparalleled this year; it is also reminiscent of The Thing and Lovecraft’s At the Mountains of Madness. It squarely plants itself in the increasingly popular genre of Canadian horror films addressing the implications of global warming and the subsequent Arctic thaw. The other honourable mentions are Eli Roth’s new cannibal film, The Green Inferno, and Patrick Brice and Mark Duplass’s Creep.

The comedy category is harder to call, so we’ve divided it into sub-genres. Dead Snow: Red vs Dead is the best horror-comedy since Shaun of the Dead. The Mole Song was the premier action-comedy, with an honourable mention going out to Gothic Lolita Battle Bear — who doesn’t love a gun-toting pink teddy bear who merges with a woman to form a zombie-fighting superhero? Meanwhile, The Hundred Year Old Man Who Jumped Out a Window and Disappeared was the funniest pure comedy. This is like a Swedish Forrest Gump, but it’s a far, far better and, at times, funnier film. However, the funniest scene in anything we saw was the curry restaurant scene in Fuku-Chan of Fuku-Fuku Flats; it’s an unforgettable, instant classic.

Han Gong-Ju was the most heart-wrenching drama. The other two standouts in this category were Metalhead, which reminded us of Broken Circle Breakdown at times, and Jellyfish Eyes. The latter is a children’s fantasy that addresses a post-Fukishima Japan. An honourable mention also goes to White Bird in a Blizzard.

The best sci-fi and “time/space” related film was The One I Love and the action standout was Into the Storm, a five-star B-movie, rednecks and all.

The top documentary was Fight Church. This even-handed, well-edited, and fascinating film explores the growing phenomenon of pastors who are MMA fighters and run fight club ministries in their parishes. It’s really unfortunate that it only had one screening, but you can find it on Netflix this fall (supposedly in November) if you missed it. An honourable mention goes to Kung Fu Elliot.

Last, but not least, the singular honour of making us so uncomfortable we had to look away (no mean feat for seasoned horror fans like ourselves) goes to Dys-’s coat hanger scene.

Fantasia always seems to surprise us with unexpected successes year after year and this edition wasn’t an exception. Here are four movies that at first glance didn’t promise particular greatness and yet delivered pleasant surprises.

Directed by Hans Petter Moland and starring Stellan Skarsgård, In Order of Disappearance is definitely a favourite this year. I walked in expecting a gritty revenge story but touches of dry and dark humour turned this film into an enjoyable ride through the snowy hills of the Arctic circle. If Skarsgård is excellent in the role of the laconic and vengeance-thirsty father, it’s Pål Sverre Hagen (portraying a psychotic, vegan drug lord who happens to love his young son… and cupcakes) who steals the show. Never boring and beautifully shot, this Norwegian thriller is a must see.

As far as animation goes, The Fake doesn’t try to seduce us with gorgeous artwork, but instead hits us with brutal realism. With a difficult topic and complex characters, this Korean film takes us through a depressingly beautiful and philosophical journey. Min-chul, a violent and rude character, makes for a perfect protagonist that you hate to love.

Without much surprise, Gun Woman was a perfect choice for Fantasia. With one of the festival’s favourite actresses, Asami, and a simple but efficient story, it was almost a match made in heaven. But it’s the way director Kurando Mitsutake gets around the minuscule budget to create a violent, gory and fun movie that puts Gun Woman on this list.

Last but not least, the German feature Wetlands was a real punch to the gut. Even its repulsive opening scene cannot prepare you for the revolting and disgusting series of misfortunes and discharges you are about to experience. Yet the main character (interpreted by Carla Juri) is so lovable and endearing that you can’t help but endure as she takes you into her world of sexual deviants, bodily fluids and teenage romance. ■