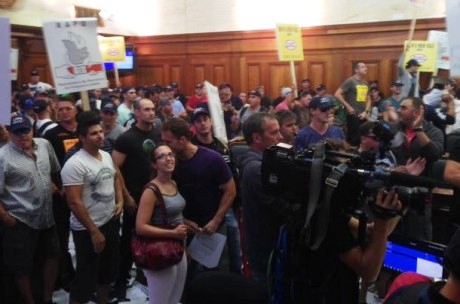 What if there was a blaze and the firefighters who showed up had filled their hoses with gasoline. How do you think that would go?

That pretty much sums up the monumentally stupid protest actions at Montreal City hall Monday night. On the eve of public hearings into Bill 3 — the province’s plan to unilaterally change pension plans for municipal employees — a swarm of ranting, rampaging, ransacking protesters managed to destroy whatever tiny reservoir of goodwill unions had managed to build up in the last few weeks.

(I’m not going to talk much in this column about what the union movement’s opponents and critics are saying about Monday’s protest — I think what its own leaders, friends and allies are saying is even more telling.)

The most Machiavellian schemer could not have come up with a better way to collapse any hope of public support for the unions’ cause. Even among the 65,000 workers affected by Bill 3, you’d be hard-pressed to find many who applaud tactics that included fires, smoke-bombs, ear-piercing noisemakers, bursting into council chambers, intimidating city councillors, breaking windows, chasing the mayor around city hall, throwing water glasses around the council chambers and leaving a massive trail of paper (which only served to remind citizens of why we dislike bureaucracy) in their wake.

Hell, even the protesters’ spouses, children and parents were probably bowing their heads in shame.

Certainly, the head of the coalition of municipal unions fighting Bill 3, Marc Ranger, was shaking his head in disgust Tuesday morning, putting as much distance as possible between himself and the Montreal protest, which was principally organized by the local firefighters’ union. “We don’t need that and we don’t want that (kind of action),” the head of the Coalition syndicale pour une libre négociation told CBC.

“I want people to calm down. On this point I agree with (Montreal) Mayor (Denis) Coderre.”

Other unions voicing their anger included the powerful Confédération des Syndicats Nationaux labour central. CSN vice-president Francine Lévesque said the protesters had hurt the cause. “It has given municipal employees an image that does not correspond to the reality of the efforts made to find solutions” to the pension impasse, she told reporters.

And although the Montreal police brotherhood was sticking its head in the sand (more on that tomorrow), its counterparts were not. Condemnation came quickly from the Quebec Municipal Police Federation — and even from Montreal’s notoriously robust blue-collar union. (Although members booed union president Michel Parent when he condemned the “unrest” at city hall.)

The firefighter’s union, which organized the protest, was largely unapologetic, however. President Ronald Martin insisted the invasion of the city hall chamber was just a spontaneous demonstration of how mad firefighters are over the planned pension reforms. “That’s where we’ve gotten to: we can no longer control our members.”

Strange that the Coalition hasn’t had the same problem at other demonstrations, dozens of which have taken place without any major hitches. That’s because, in the grand tradition of Quebec labour unions, these demos are policed by a disciplined “service d’ordre” composed of union volunteers and staff whose main jobs is to keep demonstrators from going off the reservation.

So did the firefighters have their own service d’ordre in place? Yes they did, Martin revealed. He actually gave them credit for quelling the uprising when they finally ordered the protesters to leave the building.

That’s a little like bragging that you were quick to put your dog back on his leash after he’d bitten the neighbour’s kid.

In other interviews, Martin even tried to downplay the scale of the uprising. “I admit there was some unrest,” he told La Presse, “but at the same time, that’s nothing compared with what happened in the ’70s, ’80s and ’90s and at the beginning of the 2000s.”

That’s a little like a cop accused of pushing a prisoner down the stairs reminding you that in the good ol’ days they used to just beat you until you fell down on your own.

What’s merited here is not a nostalgic nod to the thuggery of old but a clear and abject apology that anything violent happened at all. Instead, all we got from Martin were hems, haws and a refusal to take responsibility for the actions of the men and women he is supposedly leading.

Martin’s resignation should be the first thing the firefighters union offers as part of its apology to Quebec citizens — and to the 35,000 municipal workers tainted by its actions.

Part II! Tomorrow: the role played by police as the demo escalated and reflections on the ability of the Montreal force to conduct an investigation into its own members. ■