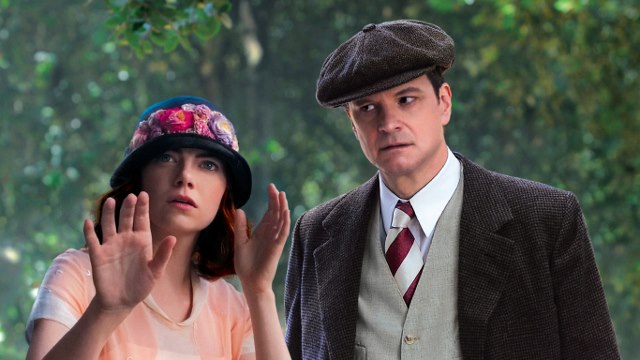 It’s hard to tell exactly where Woody Allen is coming from these days. While he’s kept up the pace of releasing a movie a year for his entire career, his recent output has seen him pingpong between comedies and dramas, sometimes delving into thrillers both well-received (Match Point) and ill-advised (Cassandra’s Dream). It’s the spottiest part of a long and storied career that’s both exciting for the surprises it holds and maddening for its inconsistency and tendency to favour a dubious script if it happens to shoot in an attractive locale. His latest effort, Magic in the Moonlight, is firmly entrenched in the latter category.

Stanley (Colin Firth) is a cynical, opinionated Englishman whose stock and trade is a magic show in which he dons a full Fu Manchu costume and makes an elephant disappear (amongst other illusions). He’s approached by his friend Howard (Simon McBurney) with a particular problem: Howard has recently made the acquaintance of a young American woman named Sophie (Emma Stone) who claims to be psychic. Ever the seasoned magician, Howard is nevertheless unable to figure out how exactly she pulls off her psychic tricks. Stanley is convinced that having such a gift is impossible, so he poses as a coffee baron and travels to the south of France in order to expose her machinations.

Ostensibly wanting to fully explore the 1920s jazz-age stuff he touched upon in Midnight in Paris, Allen delivers a pinched comedy of manners that recalls sophisticated romantic comedies of Golden Age Hollywood without being particularly funny or interesting. The story is an afterthought to the endless acidic musings of Firth (not really doing an Allen impression, a rare occurrence for an Allen protagonist) and his witty repartee with Stone. It’s as if Allen punched up a not-particularly-worthy summer-stock theatre script with a few barbs he had lying around then focused his efforts on picking out perfect hats for the cast. I must report that the hats are, if nothing else, very well-suited to both the cast and the time period. Hat aficionados take note.

Firth and Stone are quite comfortable with their sometimes leaden, overly literary dialogue (it turns out that when Allen writes suave Englishmen, they sound suspiciously like neurotic New Yorkers); the film’s best moments come in their verbal sparring, but the relationship between their characters is nevertheless forced and never very believeable. It frequently looks great thanks to sterling work by DP Darius Khondji, yet it stays doggedly stagebound as the characters simply stiffly stand there and have impossibly witty conversations. It might be a sign that Allen’s heart isn’t entirely in this project when he seems to have foregone blocking of any kind. It’s robotically middlebrow stuff, mildly diverting and pleasant enough but never threatening to rise above the level of acceptable mediocrity.

Allen’s most recent films have sometimes come off more like exercises than fully-fledged films; they seem almost like they were made because the filmmaker wanted to see if he was able to give A Streetcar Named Desire a new spin, make a Mr Magoo-type slapstick comedy for the ascot set or, in this case, make a George Cukor rom-com in the south of France. It turns out there isn’t much Woody Allen can’t do but the list of things he’s actually good at is much smaller. It’s doomed to remain a minor film in his expansive career, but at least it’s not Hollywood Ending.

Magic in the Moonlight is in theatres now