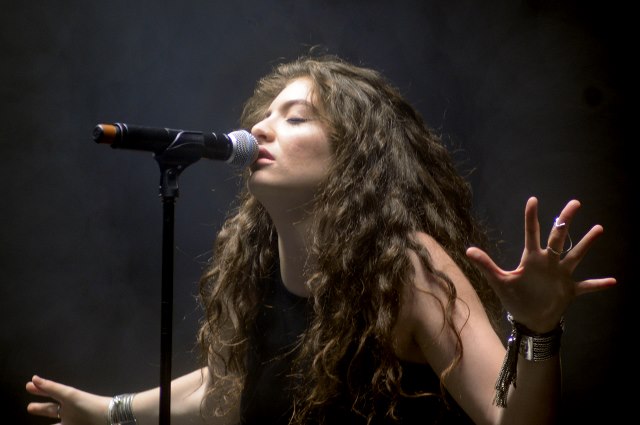 The first time I heard “Royals” with my then-seven-year-old daughter was last fall on a road trip to Niagara Falls. She was riding shotgun with her surrogate aunt, having some poppy girl radio time. After about 30 seconds, and frankly a bit of a chill down my spine, I called out from the backseat. “Turn it up!”

I needed the 5Ws. The ostensible grown-up quickly told me this was Lorde, that she was from New Zealand, that she was 16 or 17, and that this was a new radio hit. “I already know this song, Dad!” Mélodie called back, pleased to have scooped me.

It was the bass and overall production that immediately got me, but Lorde’s voice and the vocal mix gave the chill-factor. I’ve since wondered if “Royals” would have stuck out as much from the background noise in line at a busy coffee place or dep as it did on a fun family car ride, but I think those qualities would have reached me eventually. I like it better the way it happened, anyways.

My daughter likes the pop she hears on the radio and web with her mom and her friends. She likes (or can at least tolerate) a lot of the things I listen to myself. She plays and is into in instruments and shows signs of being more than a passive observer of music. But she is eight and is interested in what she wants to be, first and foremost.

She was interested in Lorde. She can like Katie Perry or Rihanna but she doesn’t care who they are, she just likes the music. Having a daddy who tells stories about musicians professionally, my kid is no stranger to this detail, and her curiosity piqued mine. Why was Lorde more appealing to her as a person than these other pop idols?

I bought her Pure Heroine for her birthday. I wanna say we both thought it was  “dope,” but that seems inappropriate. Anyways, one day last winter, I caught a straight-up, outta nowhere belly hunch, looked at Mélodie and said, “I bet you Osheaga brings Lorde this year. If so, you’re coming with Daddy!”

My daughter is no stranger at all to outdoor festivals and events, but Osheaga is hands-down the biggest party she’s ever been to. I’d been wanting to bring her for years but waited until I knew she could last the day and see something she’d love. And so it was that off we went together on Sunday for Mélo’s first real concert she can call her own. Seeing Deltron 3000 or Yelawolf or Fitz & the Tantrums with Dad was cool and all, but this was Lorde.

The thing is, to me, as a role model for my daughter, it isn’t about Lorde being one thing, or something else, or the anti-thing. If she represents some brand of packaged angst, well that’s just been there since the dawn of rock ’n’ roll. Don’t blame her, because she sure as hell isn’t that old. I just appreciate that my kid has a role model who doesn’t come onstage in panties with a weed leaf emblazoned across her ass.

It was a stunning performance. Stripped-down, raw, and without the bells and whistles of the average pop extravaganza, Lorde’s command of a gigantic stage, crowd and venue was hypnotic. As the sun set on Osheaga, my daughter stood spell-bound by her first true pop idol at the edge of the terrasse. I hung a little back to let her take it in for herself. She quickly befriended the young lady beside her, sharing glow sticks, candy and her adorable smile.

The reason I know I can bring my daughter to a gathering of such magnitude in all confidence is because she knows she is a person. I try really hard to make her understand that even though she is a child (and that, to Mom and Dad, her needs come first), the rest of the world doesn’t revolve around her. She is a part of it. And the reason I share this side of my life with her, when I can, isn’t because I need to be at any given place or event or show. It’s because I want her to understand who Daddy is and who she is. I want her to see the world for herself and make up her own mind what it’s about.

While Mélo and her new friend chit-chatted between songs, I found myself quite moved by Lorde’s words. She applauded the festival, in sincere terms, as her favourite ever. The appreciation from the crowd pulsed. And on growing up, the young performer is obviously in the eye of a rare storm, but she translates her growing pains to the world in common terms any grown-up understands: Maturity, Lorde says, is being “old enough to have responsibilities you never thought you would have, and old enough to wake up in a cold sweat worried about them.”

As I watched my little girl dance and sing, as I swayed with her to “Royals” and held her tight, Lorde’s words on growing up may just have made my eyes water a little bit. Some people feel that if you treat your child like a person and let them into your world a little, you are forcing them to grow up quickly. But the best way I can think to keep my baby close in this life is to share with her, to be honest with her, and to be with her through good times and bad, no matter what. We’ll never be royals, but she’ll always be my princess, and for now I’m still her king, and that’s a lot of power for two people to share. I’m happy my daughter loves to share as much as I do, and we’re still glowing from sharing Lorde and a day at Osheaga together. ■