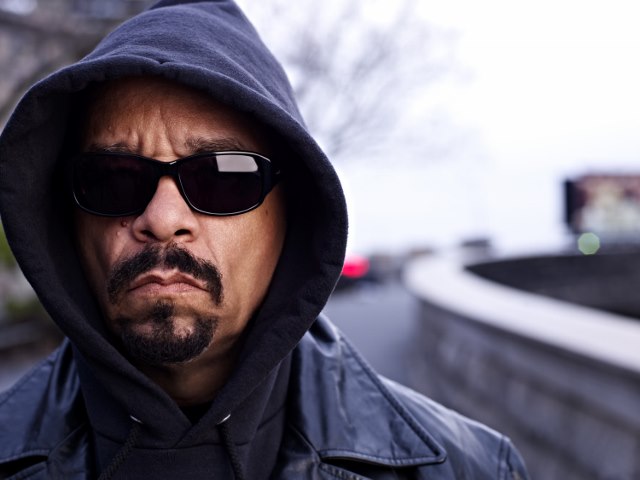 Ice-T has never been at a loss for words, and he doesn’t half-ass an opinion. In part two of our interview (see part one here), in advance of his band Body Count’s Heavy Montreal set this Sunday, we talked hip hop, TV, the Internet, music and how the medium and the message co-exist in the 21stt century. No stranger to controversy, Ice-T has reached a point in his career where putting shit on blast is a game, and he still plays it better than most in the music industry.

We’re very proud to bring you the second half of our discussion with the legendary Ice-T.

Darcy MacDonald: A lotta legendary architects of the rap game seem to do little more than pay it lip service, whereas you still seem to have genuine love for the game. (Your Netflix doc)The Art of Rap showed us a good cross-section of MCs. What are some of the things you find positive about the current hip hop scene, from the mainstream to the underground?

Ice-T: I think the positive thing is that it’s still around, and a lotta kids are getting back into the lyrical side of hip hop. I see this thing that Em is doing with the Total Slaughter battle league, and the return to that aspect of rap. I think it can only go pop for so long. The true essence of hip hop, like I said in The Art of Rap, is that hip hop requires skill, whether you’re a DJ, a graffiti artist, a breakdancer or an MC. So then you got the laptop DJs right now — that’s pop. And you got the graff artists that never really tagged a wall — that’s pop. But the core of the culture will resurface eventually. It’ll become retro to be real again, you know?

And that movie was only shot with my friends. I only went into my phone! Those are the people I’ve had personal contact with in my life. It wasn’t every new rapper. I only called up people I knew.

DM: It was my young friend Kontos who put me on the movie and I thought that was amazing. I’m twice his age, yet he’s one of the youth who has hip hop as such a part of him that it’s like you’ve been there all along for him, the same way you’ve been a legend in my lifetime.

Ice-T:  See, it’s kinda like, if you’re a pop listener to music, then the culture doesn’t matter to you. If you’re a core listener of the music, the culture will become important. So say I’m into rock. I might like a few rock records, but if I call myself a core fan, then I’m gonna have the first Black Sabbath album. I’ll know that Ozzy Osbourne isn’t just a reality TV character. I’mma do my research on Iron Maiden. I’mma know my shit, and my classic rock. Because now I wanna be part of it. It’s like being a baseball fan. You gotta be able to quote stats from the ‘50s. That means you’re a real fan.

So these kids that are really into the culture, they gotta know who Afrika Bambaataa is. It’s like being a jazz musician and not knowing who Miles Davis is.

So you can separate core fans from pop fans. Pop fans think Kenny G is real jazz and that’s it, ‘cause that’s all they know. And that’s all they care to know. Because they’re not into music.

DM: How does the digital age change the dynamic in the fight for free speech, or at least against censorship, from your point of view?

Ice-T: Well, you know, the Internet is just like, a big, open chat room, with everyone runnin’ they fuckin’ mouth. The problem is anyone can claim to be an authority about anything, anyone can lie about anything. There are no checks and balances on the Internet. It’s just like the wild, wild West, or a bunch of people yellin’ into a fuckin’ abyss.

There’s fuckin’ 10 sites up that say “CNN” that aren’t CNN. So you know, there’s just a lotta bullshit. And now, the news starts to go to TMZ for scoops – this shit is all fucked up. What the internet has done is taken down — how you say? — “respected” journalists, people that had to earn any degree of credibility before they spoke, and just let any fuckin’ idiot blogger just run they fuckin’ mouth. It really blurs the lines on truth. The Internet will just say, “This is the truth.” And it’s a lie!

There’s no one responsible for it. I’ve been quoted on the Internet, with people taking my name and making up words I didn’t say. And who did it? Joe Shit. No one can find ‘em. These motherfuckers are hiding behind their keyboards, no one knows who they are, and you’re shaping the world with your so-called “free speech.” But it’s bullshit. So it’s outta control. My opinion is: shit is outta control. Out-of-fucking-control. And if you don’t talk to the horse’s mouth, it’s not true.

DM: Or look at network TV. I’ve been watching that show Hannibal. Just short of a boob or an F-word, I’m seeing some of the most grotesque shit I’ve ever seen on network television. That isn’t even a cable show. I almost feel like it’s pulling the blinds even further down past people’s eyes and ears, ‘cause now we think we’re allowed to say what we want.

Ice-T: I always said, you know, like George Carlin’s “seven words you can’t say” — I can be way more pornographic or way more obscene without using those words. You know what I’m sayin’? I’m on SVU, and deal with child rape, and all kinds of broken hymens and all kinds of foul shit on network television. It’s all bullshit. The questions is “Who are you offending?” and “Do they have power?”  If I offend poor people, nothing is gonna happen. If I offend someone who has the power to attack back, brace for impact. And that’s all it is. You can say anything you want, as long as you don’t offend someone who has the power to attack back.

DM: With all the lobbies you faced after “Cop Killer,” you’re definitely the guy to make that statement. So I won’t misquote you and I will put your words on the Internet (laughter).

Ice-T: The Internet is so full of shit. And I mean, people go there for knowledge, that’s where they’re getting their information. Me and you could throw up a blog right now and just say the worst shit, and some people would denounce it, and other people would believe it. It’s just crazy, it’s a madhouse. That’s what it is.

DM: This is such a classic rap question, but is hip hop still a viable tool for social awareness?

Ice-T: Yes. I mean, hip hop is the culture, rap is the vocal delivery. It’s no different than what country & western guys do, or “Subterranean Homesick Blues” — it’s a vocal delivery. All music can create change because you have that audience in front of you. Sure, a lot of it will fall on deaf ears, but you can reach people with music. Music has always been a method of change. It always will be.

So the thing of it is, if hip hoppers only wanna talk about partying in the club, they’re not taking advantage of the tool. That’s where I tell youngsters like, “Yo, you can do that and talk about parties and shit, but you can also make change. Don’t play yourself and not take advantage of that power.”

On the Body Count record (a young fan) told me, “This is like medicine.” I asked why and he said, “Because on every record you’re telling me something I need to learn about my life.” I said, “Yeah, but it doesn’t look like medicine, though.” He said, “Nah, it looks like a Rob Zombie movie or something!”

I figure that’s the trick. Don’t make it look preachy, but exchange an idea well. A lotta lyricists are just dumb fucks and couldn’t fuckin’ write anything prolific if they could even write anything. So you can’t ask every artist to have meaning — they just ain’t capable of it. But some artists are, and a lot more than use it are.

DM: I know you’ve got the Final Level podcast going and that’s relatively new, so please tell us a bit about that. And also, what does that medium allow you to say that others don’t?

Ice-T: What happened there was my boy Mickey Benston, my business partner, came at me  with the podcast idea. I didn’t even know what a podcast was, I ain’t gonna lie. So we kept talkin’ and talkin’ and finally he said, “You know, you can do it from your house.” So I came up with a format where we break it up into little segments, and it’s turned out to be a blast. We’ve got hundreds of thousands of listeners every week, and it’s really as raw as I can get. It’s kinda like, if you listen to my music, you get a little of me, but the podcast is me, uncensored. So just talkin’ shit. You get to hear my humour, you get to hear me be serious, you get to hear me talk shit with Mickey. It’s set up so a fan or a listener can kick it with me. People used to always say that until you’ve really hung out with Ice-T, you don’t get him, but the podcast kinda feels like you’re hangin’ out with me. And it’s been really good and I’m really enjoying it. And I get the artists to come out of their shell and really get wild.

DM: It’s cool to get to know you at this point in your career. Between The Art of Rap and the podcast, it’s a lot more stripped down, and even though you’ve done the reality TV and so forth, it really gives a better glimpse into who you’ve become.

Ice-T: The reality show was raw, but not as raw as the podcast. I mean I believe everybody should have a censor in their head, you shouldn’t just say any fuckin’ thing that pops in there (laughs). But at the same time I’m pretty much just balls-to-the-wall goin’ crazy!

DM: Will we ever get reissues or re-masters of your old rap records?

Ice-T: I don’t know, ‘cause it’s all on so many different labels. My early two were on Warner Bros, then Sire, and then I have some on Priority. I mean a lotta that stuff is still available. I’m more of a forward guy. People ask, “Are you gonna go back?” and I’m like, “Nah.” Right now I’m ready to do another Body Count album. I’m up to speed and I’m out here on the road writing songs.

DM: And I don’t know that those albums need to be re-mastered. They come from a rawer time when that’s how hip hop sounded. There’s something to be said for leaving shit alone, too.

Ice-T: Right (laughs). You sounded like my buddy when you said that! “There’s something to be said about leaving shit alone!”

DM: Well, after a half hour we’re not buddies but believe me, I’ve known you my whole life. So what else is on the go before we get going?

Ice-T: In the now, we’re gonna come up and rock with you and that show with Slayer and all those big bands! ■

Body Count will perform at Heavy Montreal’s Heavy stage at Parc Jean Drapeau on Sunday, Aug. 10, 4:30 p.m., $85 for a Sunday ticket/$175 for a weekend pass. Tickets can be purchased here.