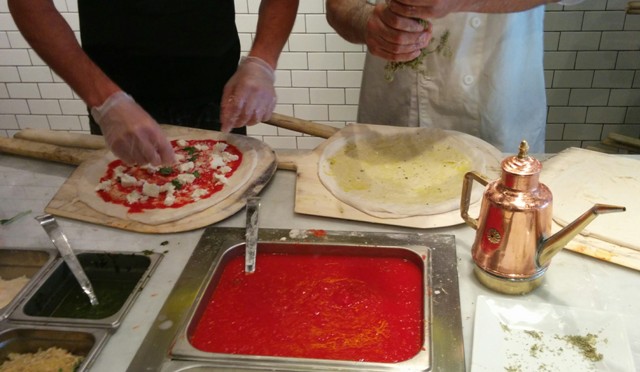 Brigade Pizzeria Napolitaine doesn’t exactly fit Kramer’s long-simmering business idea of a pizza place that lets you slap your own dough and make your own pie, but it is unique as far as casual Montreal pizzerias go.

The Stanley Street eatery, which has been open since the beginning of August, comes from the husband and wife team behind the original Yeh! Frozen Yogurt. Unlike Yeh!, where the customer has the power to top their frogurt as they see fit, Brigade’s team will assemble a custom personal-sized pie from behind the resto’s long counter, before placing it in one of their Italian wood-burning ovens. There are tables, or orders can be made to-go.

The first thing you’ll spot upon entering is the massive counter, which starts with fresh dough and ends with the ovens. The raw dough is tossed in front of you while you peruse the prix-fixe pizza menu, which are mostly in the $9-$11 range and stick to pizza convention. My dining companion and I went for traditional pies — Hawaiian and meat lovers — which start from a margherita pizza base.

Fast forward a step or two, we were then presented with the 30 or so toppings we could add on top of our orders, for a buck apiece. Toppings included a bevy of peppers, hearty looking meatballs, more pineapple (can never have too much on a Hawaiian) and plenty of thinly sliced meats.

Once our pizzas were set, they were placed in one of the two wood-burning ovens. (Marra Forni ovens, if that means anything to you.) They were ready in a matter of minutes. The whole ordering process took less than 10 minutes, but we were also there during the post-lunch rush.

Watching the pizzas being made was entertaining. Eating them wasn’t too shabby either. The dough was really the star of the show: slightly buttery/olive-oily, thick in the outer crust and thin everywhere else. The circular personal pizza was definitely not a slice either, and needed to be eaten with a knife and fork. I ate the pizza as it was made, and found myself wishing I hadn’t erred on the side of under-spicing. Maybe it’s just my nuclear tastebuds used to the city’s infamous spice-bombed Greek pizzas, but the sauce could have used a bit of kick to go along with the prevailing freshness. There wasn’t too much cheese on either of our pizzas.

That being said, there are few places that offer personal Hawaiian pizzas, and I’m too obstinate to order anything else, so I came away pleased. My dining companion and I paid around $32 total for two pizzas with extra ingredients and two fountain drinks, and it was enough for a lunch, but would have been a little light for a hearty dinner.

Brigade might not convert the most fanatical of Montreal pizza-skeptics, but given the amount the customization offered, it’s hard to imagine someone not being able to create something to adequately suit their tastes. ■