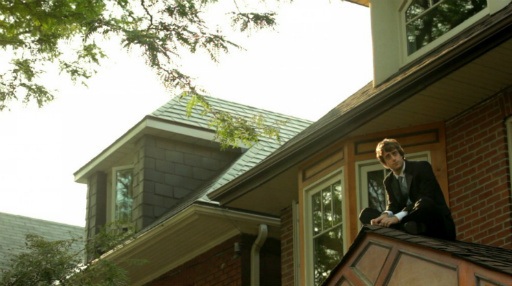 Dan Abramovici in Ben’s at Home

One of a handful of Canadian features premiering at this year’s World Film Festival, Ben’s at Home is Toronto-based director Mars Horodyski’s feature-film debut. Co-scripted by Dan Abramovici (who also plays the lead), it tells the story of budding film critic Ben, newly single, nearly 30 and entirely fed up with his life.

After a particularly dispiriting night at the bar where he runs into his ex-girlfriend, Ben decides he’s done: he’s no longer going to leave his home for any reason (except, of course, to walk his dog Schnitzel around the block). He finds voiceover work he can do from his computer, develops a relationship with a few delivery guys, gets a hang of OK Cupid and settles in for the long haul. When the grocery store’s delivery girl (Jessica Embro) begins spending more time at the apartment, however, Ben has to decide whether he’ll stick to his guns or give up on his (admittedly a little extreme) convictions.

Horodyski and Abramovici met while working on a short Horodyski directed while studying at the Canadian Film Centre. “I was really impressed with the way Mars was handling the production. It was one of those shorts where you have to shoot everything in one afternoon. It could turn into absolute batshit chaos and she kept everything running smoothly,” he explains.  Horodyski’s professionalism led to Abramovici pitching a short-film idea and soon their working relationship was born.

“It was around this time that Mars found out that Ingrid Veninger, the indie film queen of Toronto, was running this screenwriting challenge-type deal,” explains Abramovici. “It was this thing called the 1K Feature Film Challenge,” Horodyski adds. “Ingrid Veninger put up this challenge to Toronto filmmakers to make a feature film for $1,000 and she would finance five of them with the $5,000 prize she got.” Out of this challenge grew the idea of a film in which a character would voluntarily commit themselves to a single location, without veering off into costly things like action sequences (Horodyski explains that the film was eventually made for more than $1,000, factoring in post-production and other costs).

That single location happens to be Abramovici’s actual apartment. “Dan lived the character’s reality for the 10-day-shoot,” says Horodyski. “Quite honestly… my girlfriend thinks that this is crazy, but it was the best 10 days of my life!” laughs Abramovici. “It went from being my home to being an idealized version of my home. I literally would carve out a path from the bathroom to the microwave to the bed — there was gear everywhere.”

Drawing heavily on the tradition of mumblecore (though more polished and less… mumbly than the first crop of films the movement created) established by the Duplass Brothers and Lynn Shelton (who gets a shoutout in the form of Ben’s four-star review of Humpday), Ben’s at Home is a modest but charming romantic comedy that doesn’t feel too constrained by its limited locations and scope.

Most impressively for a debut feature, it doesn’t suffer the dreaded this-will-never-happen-again syndrome in which the filmmaker tosses any idea they’ve ever had into subplots hoping they’ll coalesce into something. “We wanted to tell a story that wouldn’t feel compromised by the budget,” Abramovici explains, and I would tend to agree. Ben’s at Home is admittedly not shaking up the (often unshakeable) world of rom-coms, but it’s doing them properly.

Having picked up a few awards in festivals Stateside, Abramovici and Horodyski have started looking to the future. They’re collaborating on a new feature project they call more ambitious with plans to shoot next summer. ■