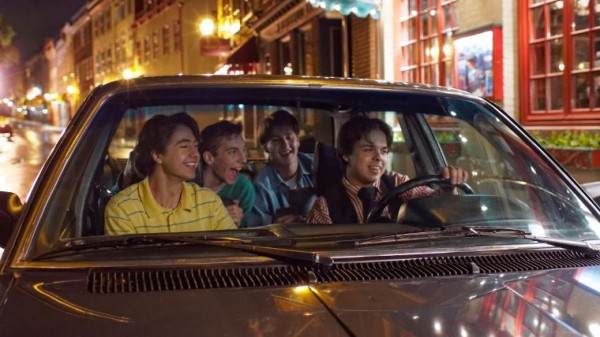 Ricardo Trogi’s 2009 film 1981 was an autobiographical film that stood apart from the glut of similar “it was a more innocent time then” films by its steadfast refusal to kowtow to nostalgia. The Ricardo character in that film was, to use the parlance of my people, un ti-crisse: egotistical and loudmouthed, the 11-year-old Trogi was a welcome antidote to the usual coming-of-age protagonist in his inherent, fearless shittiness. 1987, as you may have guessed, takes place six years later, right as Trogi is graduating high school and navigating the tricky waters of getting laid, getting a job and figuring out what he’s going to do with his life. Contrary to 11-year-olds, 17-year-olds are notoriously shitty people in cinema (and in life) – while Trogi the director never steers away from the keen observational humour and candour of the previous film, he’s working within the parameters of a story and of character motivations that are all pretty old-hat.

Ricardo (Jean-Carl Boucher) lives in a suburb of Quebec City with his barmaid mother (Sandrine Bisson), accordion player father (Claudio Colangelo) and moody 14-year-old sister (Rose Adams). On the cusp of graduating high school, he dreams of opening a 14–18 discotheque and losing his virginity to his girlfriend Marie-Josée. He spends most of his time with his best buds (Laurent-Christophe de Ruelle, Pierre-Luc Funk and Simon Pigeon) trying to avoid responsibility and be let into the mythical nightclub le Dagobert (currently closed for being Quebec City’s central hub of nightlife douchery) while resorting to rather nefarious plans to accumulate the capital to open his disco.

Trogi has a real eye for the importance of banality — not a whole lot of very intense stuff happens in 1987 but Trogi nonetheless gives it the weight that it would actually have in a character’s life. That means that a break-up is treated like a real teenager’s break-up, not some epic tragedy out of a Pearl Jam video. It’s a film that gives teen sitcom lessons like “crime doesn’t pay” and “respect your parents even if they play accordion in a cheesy Italian restaurant for a living” a firm grounding in reality, but there’s something more inherently wistful to the proceedings here that don’t hit quite as hard as they did in the first film. It’s not like this is American Pie (though there is one gross-out ejaculation joke that’s handled with as much finesse as you’re likely to see) or anything close to it, but maybe it just goes to show that the gap between a broad movie about 17-year-olds and a more poised one isn’t very big.

Trogi has never been considered a particularly elegiac or visually driven director; his first two films (Québec-Montréal and L’horloge biologique) were appreciated for their acerbic, Apatow-ish scripts more than their visual trickery. That remains mostly true for 1987 as well, though he stretches himself in a bravura, endless tracking shot that sees newly minted valet Ricardo attempting to apologize his way up the restaurant staff’s food chain after totaling a customer’s car.

1987 feels lived-in and humbly realistic for a period piece, punctuating its epic moments not with standard musical touchstones of ’80s comedy (the omnipresent “Hungry Like the Wolf,” “Der Komissar” and Flock of Seagulls songs) but rather with cheesy butt-rock and Québécois power ballads. Despite its title, 1987 is not set in pop-culture’s hairspray-and-acid-wash-heavy 1987 but rather in Ricardo Trogi’s own 1987 — that’s what keeps it engaging and hilarious even when it goes for the stuff you’ve seen a million times. ■