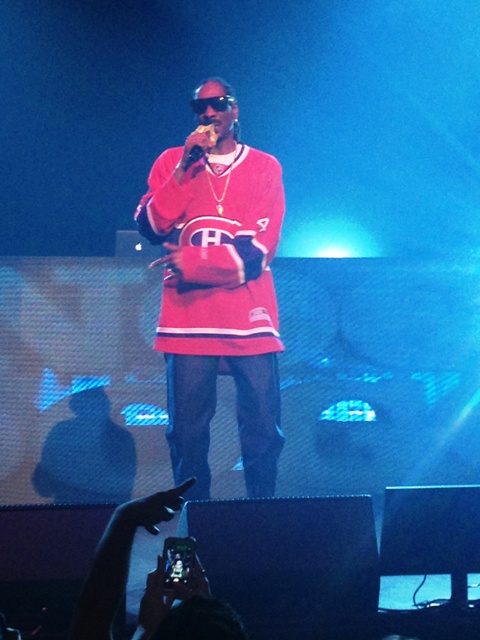 Snoop came roaring in a like a lion on Friday night for his much-hyped, intimate midnight Jazz Fest show at Metropolis. But truth be told — and I dunno if it was all the kush in the air — about halfway through he lost a little steam, and went out rather like a last puff of baby lamb’s breat’.

Montreal’s own DJ Psychology had the room getting nice when I entered at about a quarter to showtime, and seemed genuinely stoked to be there even if it was just to drop pump-up rap playlist sure-shots, which added a certain anticipatory excitement, admittedly.

Turning it over to Snoop’s DJ (I never got his name) at 12 a.m. sharp, we were treated to a shorter, louder, watered-down version of the same set, only this time with lots of yelling about whether or not we were there to see Snoop, how much weed we can collectively burn as a city, and of course, the assurance that the Dogg had been allowed in the building.

That felt a lot longer than it was. And you would think a seasoned pro like Snoop would hire a DJ savvy enough not to play half the fucking songs we’re about to hear live.

Anyways, it stopped mattering the moment his Holy Doggship stepped on stage, showing off a fine new garment of bleu-blanc-et-rouge, the “CH” logo up front the only thing more iconic than the man onstage. Several times throughout the hour-20 set, he will extend his arms with his back to crowd to show off his name emblazoned over the number “4”. The whole look was completed by a scepter-like, gold-and-jewel encrusted mic and a pair of no-doubt-freshly-fitted-by-Corey-Shapiro pair of big-ass shades, his dreads tied back atop it all.

Gone, for now, is the rasta hat. This tour is not the Snoop Lion show. I saw that about a week after Snoop decided to become a reggae artist and it was really cool. This time out he scaled back. The only live instruments onstage were the synths, and it was hard to tell if they were live. The hype men were truly hype, good singers and rappers, alike, and Snoop’s signature, stoned Long Beach flow is in fine form even after the metric tons of chronic his throat and lungs have turned to ash.

It’s just that when you exhale your load, so to speak, so early in a set, no matter how many huge nugs you’ve got packed in the pipe, you’re still gonna end up chasing the high. Maybe with Dre onstage, Snoop could get away with dropping “The Next Episode” and its Nate-Dogg-tribute appeal a half hour into the set. On Friday night, it should have been saved for the end. After affirming our commitment to smoking weed every day, I mean, what else much is there to say. To be very clear, he dropped all the tunes you would have wanted from Doggystyle, right away. I’m not about to list song names, ‘cuz it’s possibly a little tiny bit hazy for some reason.

What came after was a lazy series of tributes to the usual fallen martyrs of rap, alongside an inexplicable, half-assed attempt at an “I Love Rock ‘n’ Roll” singalong — seriously, what the fuck was that?

That was too significant a part of the show to call it a misstep. It was a boring, lifeless hunk of filler.

But hey: Snoop was up there, larger than life, at the Metropolis. He came back with a few more hits to wrap it up, but the second half of the set was dropped, in large part, like it was mediocre. The mixed reactions on the way out were polarizing: some had the cherubic beam of a lifelong rap wish fulfilled, others were busy itemizing how many minutes were wasted out of an hour and half against the $90 price of admission, calculating to the dime where they felt shorted.

As for me, like a good dog, I just wanted fresh air and water. My memory span has gotta be better than the average mutt, but short of the close proximity to Snoop Dogg’s unique bark and bite, I’d otherwise probably forget this as soon as the next stick is thrown my way. ■